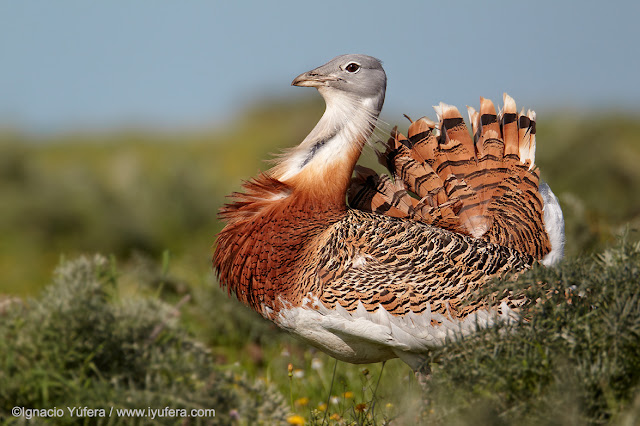 The Great Bustard (Otis tarda) is one of the largest and most spectacular European birds. Mature males can attain a wingspan of 2,4 meters and a weight of 18 kg, and are among the world’s heaviest flying birds; only its African relative the Kori Bustard and the Mute Swan can dispute that title. Females are less than a third of that size, and are much more lightly built. Together with the Little Bustard, it is the only member of the Otididae family to be found in Europe

The quintessential steppe species, its populations are linked to the open, treeless habitats under extensive agricultural use that have substituted natural grassland throughout much of their range. Except for a few remaining natural steppe tracts in Eastern Europe and Central Asia, Great Bustards are nowadays mostly found in extensive cereal fields and open pastures.

Great Bustard numbers have suffered a considerable decrease throughout its range. Slightly more than half the World’s population is in Spain, where it remains more or less stable at around 14,000 birds since the ban of its hunting, in 1982. However, many of its local populations have disappeared or are fragmented and seriously endangered; the species is classified as “Vulnerable” due to threats like changes in agriculture (mostly towards irrigation) and the increasing encroachment of much of its habitat by urbanization.

Great Bustards in Spain are rather sedentary birds, very attached to their breeding grounds. Every year, as Spring approaches, males congregate in certain sites (leks) to display and confront each other in order to establish the hierarchy that will determine which of them will mate with the females later on. This behavior takes place from late February through March and early April, sometimes extending until May, depending on the weather. During this time, adult males execute a spectacular ritual both to intimidate rivals and to attract females, locally known as rueda (“wheel”), in one of the most remarkable displays performed by any bird.

After selecting a suitable spot ensuring good visibility, the bird starts by inflating its large gular sac, exposing the dark naked skin on both sides of the neck, at the same time tilting its body forward and sinking its head backward until it almost touches the cocked tail. The white undertail and vent feathers are twisted over the back, and the underwings are lifted and fluffed up creating the effect of a huge snowy ball. At the same time the long “beard” feathers are erected, often covering the eyes, so in the final stages of the display, popularly known as “foam bath”, it is hard to tell which end is the head, and which the tail. In fact, when seen from a distance it is difficult to believe that it is a bird at all. It is truly amazing how a plumage that is largely cryptic, comprised mostly of grey and earthy tones, can so suddenly turn into such a stunning sight, visible from miles around.

The male maintains this position for several minutes, shaking and shifting its wings, and turning around to show itself from all angles. It can then walk to a different spot, maintaining the gular sac inflated and the white feathers in different stages of display, until starting all over. Although mostly a visual display, this is often accompanied by very low-toned grunts, audible only at close distance. Males generally stick to these ritualized performances, but occasionally confrontations get more physical, and birds can inflict serious damage on each other – I have witnessed a fight in which both males bit fiercely on to each other’s bill, at the same time hitting each other with their wings like fighting cocks. There was blood on both contenders’ faces before the loser was chased away. Once the dominant males have established their breeding status, the actual courtship begins, with mating taking place until early Summer.

Despite often living in heavily humanized areas (or perhaps because of it), Great bustards are notoriously shy and almost impossible to approach in their flat, open habitat; they rarely tolerate a person at less than 300 meters. The only way to observe and photograph their display behavior at reasonably close quarters is from inside a hide placed at a known display area. Any disturbance during the critical breeding season can cause serious stress to the birds, so any attempt to set up a hide must be done with extreme care. In Spain, it is necessary to obtain permission both from the land’s owner and the local wildlife authorities. In 2008 the Emberiza Fund reached an agreement with the owners of two contiguous estates in the Cáceres province in Extremadura, where observations in previous years seemed to indicate the location of an important Great Bustard lek. The estates have a total 480 hectares of pristine steppe habitat, and are used as pastures for free-range cattle, with a few cultivated plots and seasonal ponds providing drinking water. A census confirmed that the two estates are indeed used by Great Bustard for their courtship and breeding regularly every year, and also provide important feeding grounds in the winter months for Little Bustard, as well as other steppe species like Black-bellied Sandgrouse, Calandra Lark, Short-toed Lark, Crested Lark, Thekla Lark, Montagu’s Harrier, Stone Curlew, Lesser Kestrel and Hoopoe. The agreement helps to ensure that the area will remain as prime steppe habitat, providing the owners with an extra income from the fees paid by photographers using the hides.

It took more than two years to finish the studies and secure the permits needed to set up the first hides. Fortunately, Great bustards in the area are relatively used to seeing man-made structures in their range, since cattle feeders are placed and managed throughout the estates. Therefore small, discrete hides don’t seem to bother them at all. We have used different types of structure and in every case the bustards (and all other birds) have completely ignored them. In fact, kestrels and larks welcome the hides as vantage points and often use them as perches. However, it is essential that no birds see a person entering or leaving the hides, so they must be entered before sunrise and can’t be left until nightfall. In March-April, this means spending sixteen uninterrupted hours inside the small hides, which can be quite a trial to even the most patient photographer. It is often very cold in the wee morning hours, and can turn to scorching hot in the middle of the day; it is imperative to be silent at all times and keep movement to a minimum: even when no bustards are around, other birds (especially corvids) can sound the alarm and ruin everything. Besides, it is by no means guaranteed that a male Great Bustard will choose a spot near the hide to display on a particular day, or even walk past it: the leks comprise a very wide area, and the birds are scattered and move around a lot. I have spent whole long days with nothing but a lark or a stork to photograph. On the other hand, once a male walked so close to the hide that I couldn’t fit it in the frame using a 300 mm lens. Another time, I got quite jealous seeing a male display beautifully right in front of the hide occupied by a fellow photographer, only to learn later that night that he was dozing off at the time…

Whatever the discomforts and the frustrations, witnessing a male Great Bustard’s full display at close quarters, truly appreciating the bird’s imposing size and hearing the low-tone booming grunts of the male as it shakes its whole body, is one of the most extraordinary wildlife experiences to be had anywhere in Europe. Even when not in full display, a grown male parading around the flower-covered plains of Extremadura is a wonderful sight. Plus, the exercise in patience and self-control can give any meditation/zen workshop a serious run for its money…

You can learn more about Emberiza’s Great Bustard Project at www.emberiza.org. Their use can be hired through Boletas Birdwatching Tours (www.boletas.org) or through Iberian Nature (www.iberian-nature.com)