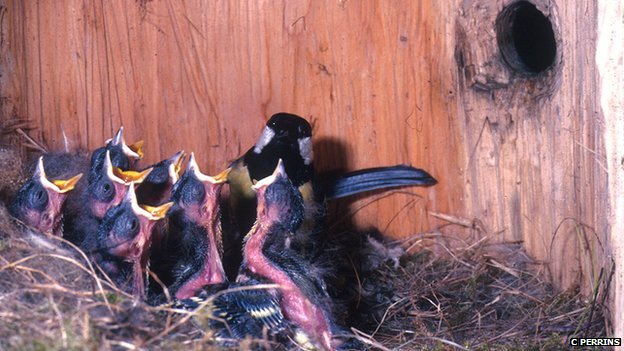 Like many birds, great tits are protective parents, often putting themselves at risk to mob predators that threaten their chicks. A study has now shown that they will join anti-predator mobs if they hear alarm calls from birds they know well.

Scientists found that the birds would “join in” defensive mobs that were instigated by neighbouring birds they were familiar with. The findings are published in the journal Biology Letters.

“Joint mobbing” – birds ganging up to fend off predators – has been seen in many bird species. But the researchers were particularly interested in the phenomenon in great tits because, in their previous work, they noticed that the birds’ lives were affected by the birds they lived next door to.

Ada Grabowska-Zhang from the University of Oxford led the study. She explained that great tits with “familiar neighbours” – birds that had occupied the nestbox next door for several breeding seasons – successfully raised many more chicks. “I thought this might be something to do with [protection against] predators,” she told BBC Nature. “Because this clearly affects breeding success.

“Great-spotted woodpeckers, for example, can put their heads into nestboxes and pull out large chicks.” The birds offset this threat by responding to approaching predators aggressively – swooping, diving and alarm-calling in an attempt to put off the woodpecker, weasel, or whatever creature is trying to make a quick meal out of their defenceless young.

To find out if the birds reacted more readily to the alarm calls of a familiar neighbour, the researchers studied birds in a nestbox population that they had monitored for their research over several years.

They then pretended to be predators – approaching nests a bit too closely when the birds’ chicks were just 17 days old. “I made a bit of noise and waited for the parents,” explained Ms Grabowska-Zhang.

“Once the parents started alarm calling and fluttering about, I measured the amount of time it took for the neighbours to join.” To make sure she could see which birds were responding, Ms Grabowska-Zhang dabbed a small amount of coloured paint around the entrance to each nestbox.

“I could tell which box they emerged from, because a little bit of paint would brush onto their belly,” she explained. Almost all instances of neighbouring birds joining mobs were these familiar neighbours joining the birds they had lived next door to for at least one previous breeding season.

But, the researcher stressed that this did not necessarily mean that birds selflessly “helped” their neighbours. “There are two explanations,” Ms Grabowska-Zhang told BBC Nature.

“One: birds join their neighbours because they think: ‘My nest could be next.’ “Or they join because their neighbours have joined their mobs before, and they know that if they don’t reciprocate, they’ll be left alone next time. It’s sort of great tit tit-for-tat.”

The study, the researcher says, shows that the birds “interact much more than we give them credit for”. And, in a broader sense, it could also reveal more about why animals, including humans, do things that are potentially risky but that benefit someone else. “It’s research into niceness,” said Ms Grabowska-Zhang.