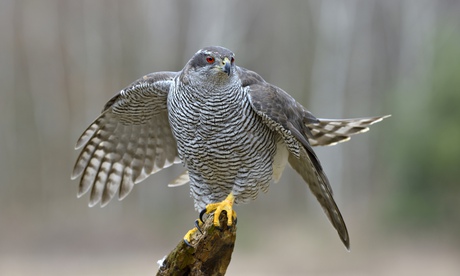 The arcane world of falconry is infamous for a snobbery that dates back to the medieval period, when different raptors were pegged to a hierarchical list of feudal stations. So the noble peregrine was for princes, the dainty merlin was milady’s bird, and – as we know from Barry Hines’s novel – it was just a kestrel for a knave. The northern goshawk, however – the largest and most powerful among a group of short‑winged hawks called accipiters – has long been considered a creature apart.

In the literature of falconry, goshawks enjoyed a ruffian’s reputation and, in the words of Helen Macdonald, were viewed as “murderous, difficult to tame, sulky, fractious and foreign”. Perhaps the challenges in her own life predisposed this noted falconer to switch from a lifelong sequence of high-class birds to the one noted for trouble.

Acknowledged for her fitful brilliance as an occasional author and as the pre-eminent female voice in a province dominated by men, Macdonald found herself approaching her 40s without family, job or home and then – very suddenly – in mourning. Her father, who had been an initial coach and companion in her childhood passion for birds, dropped dead with no warning and left her bereft.

Macdonald struggled to put her complicated life back together but two parts of her unusual restorative therapy were the acquisition of a goshawk called Mabel and a year-long plan to tame and train her to hunt. H is for Hawk is at once a misery memoir, as the author grapples with the grieving process, and a falconer’s diary about the hard-won trust between hawk and human. Yet she also splices into her narrative a biographical account of a literary hero and fellow austringer (the title for one who trains goshawks): TH White.

As a novelist Terence Hanbury White (1906-1964) might have lost traction in recent decades, but in the last quarter of last century his sequence of four books based on the Arthurian legends, known as The Once and Future King, was celebrated and the inspiration for the film and musical Camelot.

Less well-known but with an enduring cult audience is White’s own strange account of his efforts to train a goshawk in the late 1930s using only medieval methods. When the bird finally escaped and his austringer’s life ended in failure, White shelved the accompanying manuscript until it was rediscovered by an editor and later published to acclaim as The Goshawk (1951). It is this small masterpiece that Macdonald had read since childhood and partly inspired her lifelong passion for hawks and hawking.

One can see how the bird’s role as a metaphor for the outsider has multiple significances in H is for Hawk. It informs Macdonald’s own self-revelations, but also her account of White, who was the ultimate hawking misfit. He was born in India to an alcoholic father and emotionally aloof mother who were hugely ill-suited to each other. Among his earliest recollections was a moment when his parents rolled on the ground clutching at a revolver, each promising to kill themselves and their only son. In time‑honoured tradition White was packed off to a boarding school where brutal mistreatment, probably of a sexual character, compounded his own confusion and lifelong fear of intimacy. Even now, neither scholars of White’s work nor his close friends can agree on his precise sexual orientation.

His first biographer, Sylvia Townsend Warner, a lesbian, identified White as homosexual, yet his few openly declared (if largely unsuccessful) relationships were with women. Most observers agree that even these brief flings were tinged with cruelty on his part, while Macdonald tells us about his treasured library of books on flagellation and his lifelong conflict with his own sadomasochistic urges.

Perhaps it is because the daughter’s grief is so recent and pressing, whereas between Macdonald and White there is much greater emotional distance, but she is a better biographer of White than she is of her own father (perhaps also she has deeper, richer insights into the psychology of a fellow austringer). There are glowing tributes to her father as a photojournalist and as a parent, but he never comes to life as a fully formed character. In consequence, we are less moved by him and by the grief‑laced tributes of his daughter than we are by Macdonald’s sympathetic account of White’s troubled genius.

Some of this lopsidedness may be a function of Macdonald’s prose. There is a highly polished brilliance to her writing and the short staccato declamatory sentence, sometimes of just a single word, is almost a signature of her style. Yet the syntax carries a persistent subliminal message of stress and anxiety and when we are presented with her repeated, if unsparingly honest, declarations of grief – I lost count of the number of times she breaks down or bursts into tears in the book – it is as if we already know it before she tells us. The total effect is a seeming excess of strong emotion.

Yet elsewhere she deploys the same stylistic elements to immense effect. One good example is her evocation of her hawk’s own psychology. More than any other writer I know, including her beloved White, Macdonald is able to summon the mental world of a bird of prey. There is one classic moment when she meets the young Mabel for the first time. She conjures the shock of the encounter and simultaneously manages to get inside the head of the bird. “My heart jumps sideways,” she recalls, “She is a conjuring trick. A reptile. A fallen angel. A griffon from the pages of an illuminated bestiary. Something bright and distant, like gold falling through water.”

The whole underlying purpose of training the goshawk was to give Macdonald the gifts of being lost in a raptor’s instinct-driven world and of forgetting about her father, her grief and her travails. Fittingly it is when all this comes together, especially when she goes into the countryside to fly Mabel after rabbits, that the book and its prose really soar. Like her friend the author Tim Dee (Four Fields, 2013), or her contemporary Jay Griffiths (Wild, 2006), she extends the boundaries of nature writing. As a naturalist she has somehow acquired her bird’s laser-like visual acuity. As a writer she combines a lexicographer’s pleasure in words as carefully curated objects with an inventive passion for new words or for ways of releasing fresh effects from the old stock. Her one overriding concern is always to provide an exact transcription of what is there to be seen or to be felt.

Just outside Cambridge she finds one memorable winter landscape that has been kiln-dried by the frost. “Cow parsley,” begins her precise catalogue. “Knapweed. Wild burdock. The argillaceous shimmer of tinder-fine clay. Drifts of chalk beneath. Yellowhammers chipping in the hedges. Cumulus rubble. The maritime light of this island, set as it is under a sky mirrored and uplit by sea.”

The English-speaking world has an old passion for books about creatures that make strange and captivating companions. Think of Paul Gallico’s The Snow Goose, or Gavin Maxwell’s Ring of Bright Water. Helen Macdonald looks set to revive the genre.

This article was written by Mark Cocker for The Guardian.