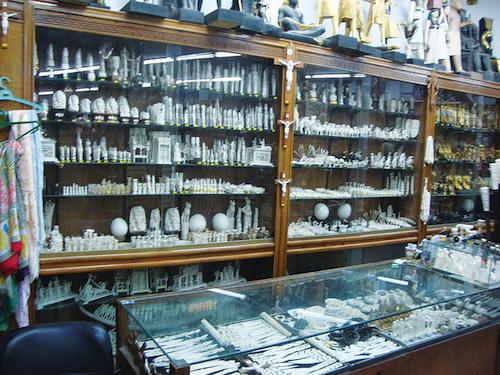 The illegal trade in elephant ivory is flourishing in Egypt due to a lack of law enforcement, combined with the entrance into the market of a major new consumer — the Chinese buyer, according to a new TRAFFIC investigation.

The new report, Illegal ivory sales in Egypt published in the latest issue of the TRAFFIC Bulletin states “Egypt remains one of Africa’s largest markets for illegal ivory items,” adding “No ivory items—old or new—can be sold legally in Egypt without a special permit, and none has ever been issued.”

According to senior government officials interviewed by the report’s authors, Esmond Martin and Lucy Vigne, since 2009, only two ivory seizures had taken place in Egypt, both at Cairo airport, while there had been no confiscations of ivory items from retail outlets since 2003. During the latest survey carried out in March and April 2011, the authors counted 8343 ivory items openly for sale in Cairo, a city described as the “carving centre of the country”.

Despite the recent political unrest almost all outlets and workshops were open in the old market—Khan al-Khalili—Cairo’s main centre for the manufacture and retail sale of ivory products. A further 918 ivory items were seen in Luxor. 3000 of the ivory pieces were estimated to have been produced in the last five years, the rest mostly carved in Egypt in the 1990s and early 2000s.

Previous TRAFFIC surveys of Cairo and Luxor, the two main Egyptian ivory markets, in 1998 and 2005 found an overall 43% reduction in the combined number of ivory objects for sale, but this figure had only dropped by a further 10% in the 2011 survey, mostly in Luxor. “The encouraging demise of Egypt’s illegal ivory markets between 1998 and 2005 has now lost all momentum. Government regulators have faltered and Egypt retains its unenviable position as a leading ivory retailing offender,” said Tom Milliken, TRAFFIC’s ivory trade expert, who commissioned the study.

“Tourists buying ivory are potentiating this illegal trade, making a mockery of CITES and fuelling the poaching of Africa’s elephants.” The report found that while Spanish, Italians and Americans were the main buyers in 2005, more Egyptians and Gulf Arabs were now buying ivory rosaries and walking sticks, but the Chinese have become the principal buyers, reportedly purchasing over half of all worked ivory sold.

One ivory vendor told the investigators that Chinese buyers would sometimes spend USD50,000 on ivory during one bargaining session. Others claimed there was no problem in bringing ivory out of Egypt, with some even offering to write a receipt indicating that a piece was an antique or made of camel bone.

The Egyptian Wildlife Service is mandated to prevent illegal wildlife products from coming into and out of the country and from being displayed in shops, but there have been few ivory seizures since 2005, while inspections of retail outlets have failed to find ivory. Meanwhile, ivory continues to be openly carved and displayed in Cairo’s markets without any prosecution ensuing.

In May 2010, the Egyptian Management Authority for CITES (the Convention on International Trade in Endangered Species of Wild Fauna and Flora) held seven training courses involving wildlife officers, Customs, police officers and tourist workers, to identify products from endangered species, and produced posters to help officials identify elephant tusks. “It is time these newly learned skills were employed to confiscate raw and worked ivory, in order to bring this flagrant trade to an end,” said Esmond Martin, the lead author on the report.