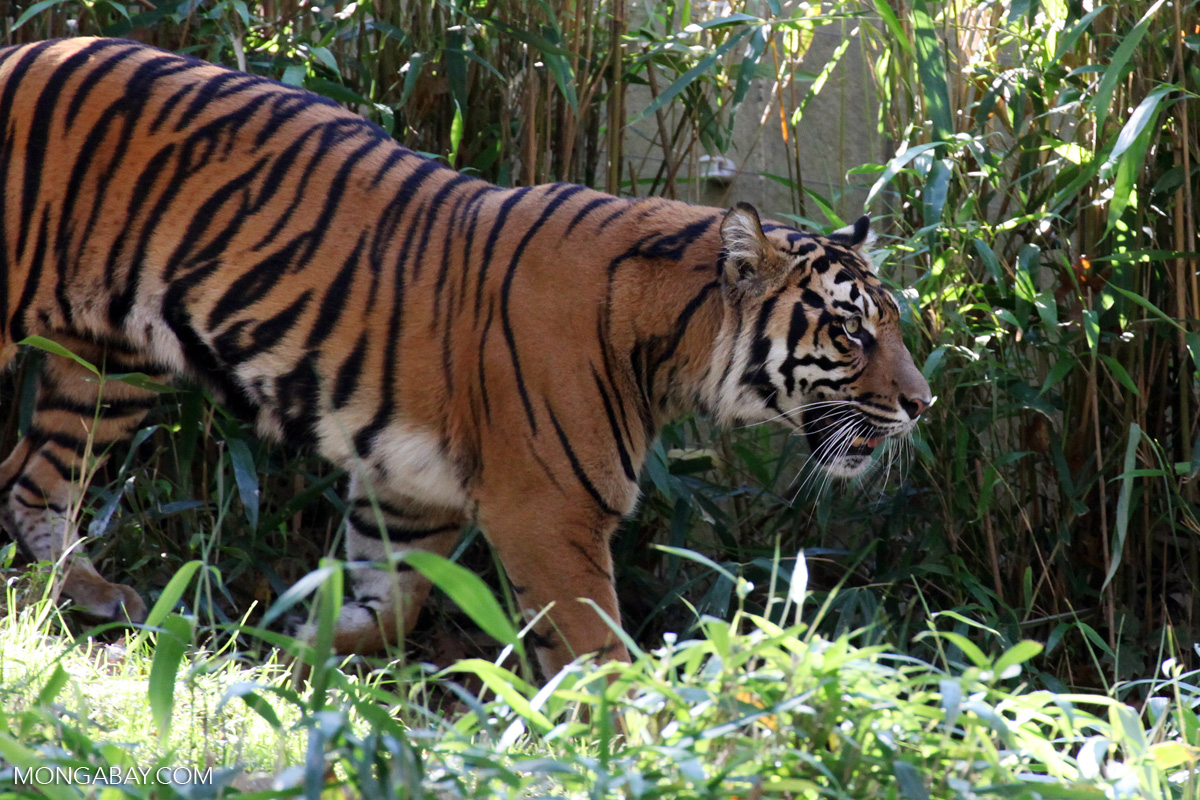 A court in Indonesia’s Aceh province has sentenced two men to four years behind bars for attempting to sell a tiger skin, in the toughest ever penalty handed down for a wildlife crime there.

Sarkawi Bin Warigo, 41, and Sabaruddin Bin M. Yusak, 45, were arrested last July. During the trial, they refused to be accompanied by a lawyer, court records show. In addition to the jail sentence handed down on Oct. 18, the court also ordered them to pay 50 million rupiah ($3,300) each in fines or serve an additional four months in jail.

The two men were arrested at Sabaruddin’s parents’ house in South Aceh district during a deal in which they acted as middlemen. The man who provided the tiger skin to Sarkawi, identified only as Fanji, a co-worker at the oil palm plantation where Sarkawi was employed, remains at large and is on the police’s wanted list. Also being pursued by police is a third middleman, identified as Munzir, with whom Sabaruddin planned to sell the pelt to an unidentified buyer for 50 million rupiah.

Sapto Aji Prabowo, head of the Aceh branch of the government’s Natural Resources Conservation Agency (BKSDA), commended the prosecution’s handling of the case, but warned the trade would continue if demand for animal parts went unaddressed.

“We’re still finding animal snares during our forest patrols,” he said. “If the buyers aren’t caught, [the tigers] will keep being hunted.”

Fewer than 400 Sumatran tigers (Panthera tigris sumatrae) remain in the wild, according to the WWF. Dozens of the critically endangered cats are killed every year by poachers, with tiger parts a prized ingredient in traditional Chinese medicine. Their skins are sought after as ornamental objects as well.

The conviction by the court in Aceh came just a day after a court in Lampung, another province on the island of Sumatra, sentenced five men to three years in prison and fined them 50 million rupiah each for a similar offense. Three of the men trapped and killed a tiger in Bukit Barisan Selatan National Park, a UNESCO World Heritage Site and home to a tenth of all remaining Sumatran tigers, before cutting it up and selling the parts to the two other defendants.

Indonesia’s 1990 Conservation Law allows for a maximum five-year jail sentence for wildlife crimes. Conservationists say the sentencing guidelines are in dire need of change. Light sentences are common and this fails to deter traffickers, they say. Efforts have been made to revise the law to allow for harsher sentencing.

Dwi Adhiasto, program manager of the Wildlife Crime Unit, an initiative in Indonesia of the Wildlife Conservation Society, said the latest court ruling still wasn’t enough to deter other traffickers. He cited a separate case where a tiger trafficker served a two-year sentence and then picked up where he left off after leaving prison.

“That’s proof that the risk they take is outweighed by the benefits they receive [from the trade],” he said.

3-4 years is a joke. Poachers will continue to ‘risk’ this sentence until the last tiger is gone which obviously is not considered that consequential to today’s man-centered economic interests of Indonesian Govt..