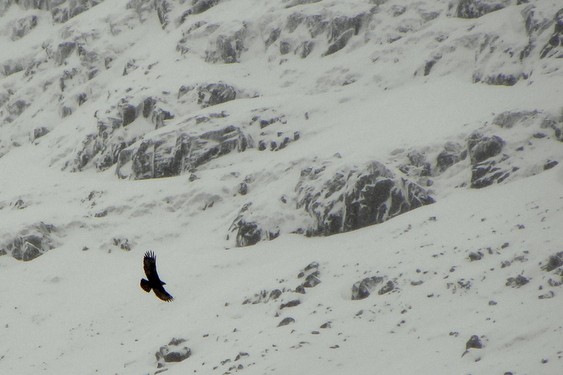 It was the first week of March on the wintry island of Mull and I was out in the field to focus on a local pair of Golden Eagles to monitor their early season behaviour. The usual persistence was required to see these elusive birds and once the snow eased off, in classic Mull fashion, blue skies arrived and the sunshine lit up the white landscape.

As the sun appeared so did a pair of Golden Eagles with the male performing some spectacular sky diving displays including holding a tree branch or stick and dropping it in mid air before stooping at great speed to catch it again. Later on the male bird continually patrolled his territory boundary appearing to pass over the exact same tree, taking the same route over half a dozen times. It was a coastal eyrie so potentially there could be a lot more to defend their territory from, for example, Herring and Black-backed Gulls.

After these events a male Hen Harrier was seen fighting the icy north winds before the Eagles appeared again, with the female Eagle landing on a mature Sitka Spruce and the male coming to join her as copulation took place. Fingers crossed for a successful breeding season for the first time in nearly a decade.

Mull is an island driven by wildlife tourism and sets an example globally of the value that certain species can have. The eagles bring in millions of pounds annually and produce over a hundred jobs on the isle. This second biggest Inner Hebridean island has enjoyed a lot of positive media attention which has helped to enhance the island’s reputation over the years and the eagles’ many TV appearances have put the island on the map for general awareness and tourism. The RSPB and all the conservationists involved deserve huge accolades for the success of the White tailed Eagle re-introduction and the positive effect it has had on a large number of people’s livelihoods, and the economy as a whole.

The island’s reputation was in jeopardy in 2012 after a tiny minority of islanders spoke up claiming the eagles were causing havoc with wildlife on Mull. A 70 year old resident calls for a cull and describes Sea Eagles as dangerous beasts and believes it is only a matter of time before a bird picks up an unattended baby or toddler. Obviously this is nonsense and unfortunately for him and the Scottish papers that printed this, they have embarrassed themselves in front of the nation. The only problem is that less educated people might actually believe it.

A local farmer voiced his concern over possible livestock loss and he later confessed in a community meeting that he simply just didn’t like Eagles. The council also contacted the RSPB regarding worries of declining Puffins on Lunga from Eagle predation and RSPB Mull eagle officer David Sexton put that to bed straight away confirming that Puffins have increased since eagles colonised the island again! A desperate comment by a community councillor expressing the decline of Rabbits in the south of the isle was not taken seriously. Grazing Rabbits are competing with sheep so who is complaining!?

Top predators don’t survive for thousands of years to make species extinct. They play a vital role in promoting a healthy ecosystem. Incredibly, some of the outspoken residents run tourist reliant businesses such as B&Bs and catering facilities. That would be equivalent to hotel owners in St Andrews condemning the sport of golf and trying to rid it from the town.

Back to the local Eagles and mid way through spring we had enjoyed some fantastic spells of weather with plenty of sunshine hours and low winds to help increase the birds’ chances of success. I left them alone and monitored them from sea as our boat excursions passed near to the birds’ territory. After a spell of a few weeks with no clues at all to whether or not the incubation was a success and chicks had hatched, I was slightly concerned. A few days following, as we were passing the territory on another trip I saw two Golden Eagles in flight as the male bird suddenly started doing strong sky dive displays as another two Goldies approached from a greater height. This behaviour told us that they were protecting something and as one of the birds dropped down to reveal the location of the eyrie, there was a healthy looking eaglet on the edge of the nest cup, flapping its wings to strengthen its flight muscles.

Mull has no records of illegal persecution of raptors on the island. A significant reason for this is that there is no land managed for Grouse. The west of Scotland is naturally a lot wetter than the east and therefore less promotion of heather so Red Grouse are a scarce species. The island’s reputation as a persecution-free zone further promotes the area for wildlife tourism. The largest Hebridean island, Skye also sustains breeding Golden and White-tailed Eagles. Skye seems to lie in Mull’s shadow when it comes to wildlife tourism and one thing that could affect the island’s reputation is instances of persecution and in particular one record in recent years when a dead White-tailed Eagle was found at the bottom of a cliff. It had been decapitated and later found with traces of gun shots in the bird. The story made the national media and what message does that send out to potential visitors when they know that there has been criminal activities like that undertaken by natives of the isle?

Towards the end of another season on Mull, I ventured out to see if there would be a positive outcome for the local eagles this season. I picked my usual distant vantage point, blending into the environment to wait for activity. After a good hour scanning, a bird appeared over the sky line and when I got it in the scope it turned out to be a newly fledged Golden Eagle presumably from the local pair! I watched the bird soaring in the Hebridean sky with the Atlantic ocean as a backdrop. The bird suddenly started drifting my way, it got close enough to make eye to eye contact before moving on. Whether it was an association, curiosity or just a co-incidence, what an ending and a huge privilege to watch a successful breeding season of the iconic Golden Eagle and it is just the beginning now for the fledged bird and I wish it a long and successful life.

The population of Mull used to be at around 10,000, but in the 18th and 19th centuries there was the infamous highland clearance which caused a lot of the landowners to replace their tenants with sheep which had more value to the land. The potato famine and also the collapse of the kelp industry were also the cause. Landowners on the north of the isle built a new stately home during this time and named the house Glengorm which means blue smoke named after all the burning peat used for destroying crofts, with some being burnt minutes after families had left. A lot of the homeless highlanders left the isle from Calgary Pier to attempt to start a new life as far away as America and Australia as Mull’s population dropped by around 75%. The increase in sheep added to the grazing pressure on the land decreasing the available live prey for the Golden Eagles but increasing carrion as a food source. The large reduction in people decreased possible conflict, and disturbance of the Eagles.

This year RSPB Mull Eagle Watch got awarded with only the second 5 star wildlife attraction in Scotland. The partnership project which is run by Forestry Commission Scotland, RSPB Scotland, Strathclyde Police, Scottish Natural Heritage, Mull and Iona Community Trust along with local volunteers. This is further evidence of what White-tailed Eagles and general wildlife tourism can do for a rural economy.

Of the 25-30 Golden Eagle pairs on the island, 9 young fledged in 2012 which is about average compared to previous years. White-tailed Eagles had a bumper year with 18 pairs producing 19 fledged young. It sounds like a healthy figure for one isle to produce but is it just replacing illegally persecuted eagles in the UK for that year or worse a percentage of lost birds? The fledged Eagles in 2012 have a huge challenge to survive in a country with one of the worst illegal persecution records in Europe and a planned severe rise in wind farm sites increases the threat. However, locations like Mull set an example of the value attached to birds of prey and give us hope for the future.