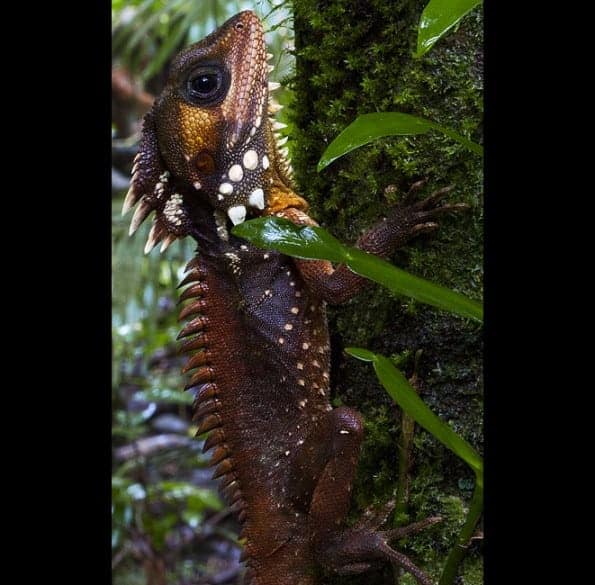 Known as ‘Jalbil’ over these past two-thousand generations, but much more recently, ‘Boyd’s Forest Dragon (Hypsilurus boydii); this living dinosaur, a Jurassic relictual species, distinguishes itself amongst its reptilian fraternity by relinquishing the energy that is otherwise available from direct sunlight. Almost certainly the only reptile in the world that does this, its only method of thermoregulation is through ambiance, always conforming to the temperature of the occupying vegetation.

Off-setting the implicit energy deficit, Jalbil has become expert at positioning itself where the massive, flightless Strong Stick Insects (Anchiale briareus) are chemically attracted to new leaves. Its rewards are certain to exceed the energy expenditure of the ambush.

The animal in the image is an adult male. I suspect they can probably live to around sixty-years and because of their enigmatic character, primitiveness, endemicity and relative sparsity of distribution, they have become hot targets for poaching.

As they have a less abundant energy store, they are prone to remaining fixed to the tree upon the approach of danger, drawing their limbs into their bodies and attempting to conceal themselves behind their occupying vegetation, making them easy to abduct.

However, these super-cool Daintree dinosaurs are endemic to the rainforests of Australia’s Wet Tropics, which means that they are NOT inhabitants of alternate habitats and particularly not in private collections!

It’s colors are so earthly and vibrant, I love those yellows and reds.