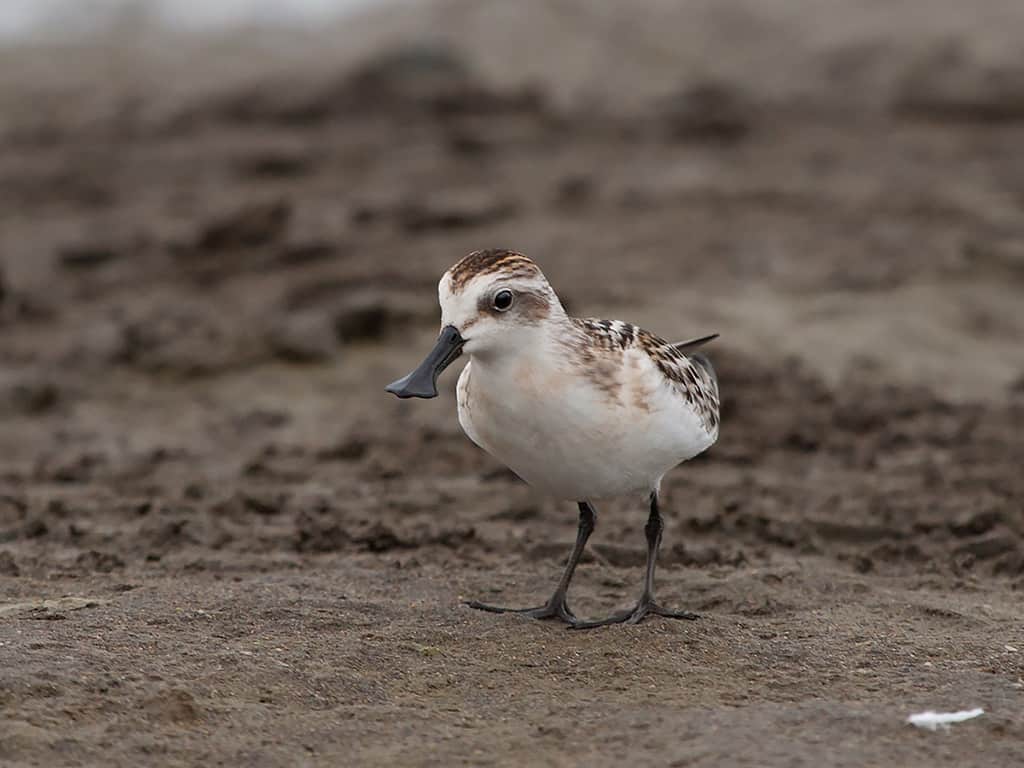 One of the world’s rarest birds — the tiny spoon-billed sandpiper— could soon lose a critical habitat to land reclamation projects, warns a new report by Greenpeace. Every year, the reddish-brown spoon-billed sandpiper (Eurynorhynchus pygmeus) makes a 5,000-mile long journey, flying from its breeding grounds in Arctic Russia to its wintering sites in places like southern China, Bangladesh and Myanmar. On the way, the bird makes a crucial three-month stopover at Tiaozini mudflats in Jiangsu province on China’s eastern coast.

This is the single most important site for the species, Nigel Clark of the British Trust for Ornithology told Mongabay. The birds rely on the mudflats and wetlands not only for their annual moult — a period when they replace all their wing feathers — but also to refuel and to find refuge.

The coastal site is also important for the birds during their journey back to the Russian breeding grounds. Moreover, Tiaozini is a critical habitat for other endangered birds like the Nordmann’s greenshank (Tringa guttifer) and the black-faced spoonbill (Platalea minor). The Tiaozini mudflats, however, could soon be gone.

According to Greenpeace, the Jiangsu provincial government has already converted about 67.5 square kilometers (~26 square miles) of Tiaozini’s coastal waters into land by filling the area with soil and rocks. The mudflats and marshes that were once haven for waterbirds are now hard land. The government plans to reclaim another 599.5square kilometers of Tiaozini by 2020.

“Wetlands destruction is one of the main threats to the spoon-billed sandpipers’ survival,”Greenpeace East Asia campaigner Zhang Jing told Mongabay. “If development at Tiaozini continues, wetlands that measure ten times the size of Manhattan will be destroyed, taking a major toll on biodiversity. Not only will the ecosystem be irreparably damaged, with a major impact on migratory birds, but the project will also have an adverse impact on people in the area whose livelihoods depend on the wetlands.”

Greenpeace is urging the Jiangsu government to halt further land reclamation at Tiaozini.

In February this year, China’s State Council asked Jiangsu and 13 provinces to delineate “ecological red lines”– ecologically sensitive areas where no development will be permitted — by January 1, 2018. According to Greenpeace, Tiaozini is not currently included in Jiangsu’s draft ecological red lines.

The spoon-billed sandpiper populations have plummeted over the years. In the 1970s, scientists estimated that there were about 2,000 breeding pairs of the bird in the world. In 2014, however, Clark and colleagues estimated that there were only 210 to 228 breeding pairs, or about 650 individuals left in the wild. The species is currently listed as Critically Endangered on the IUCN Red List.

Clark predicts that virtually all spoon-billed sandpipers that currently use Tiaozini — which is about one-third of the global breeding population of the species —would disappear should the next phase of reclamation go ahead.

“We have individually marked a number of spoon-billed sandpipers and have found that they are extremely site faithful to their breeding wintering and stopover sites,” he added. “It is highly likely that the world population of Spoon-billed Sandpipers will at least half if this site is claimed. This could push the species to extinction.”

This article written by Shreya Dasgupta was first published by Mongabay.com on 14 Dec 2017.