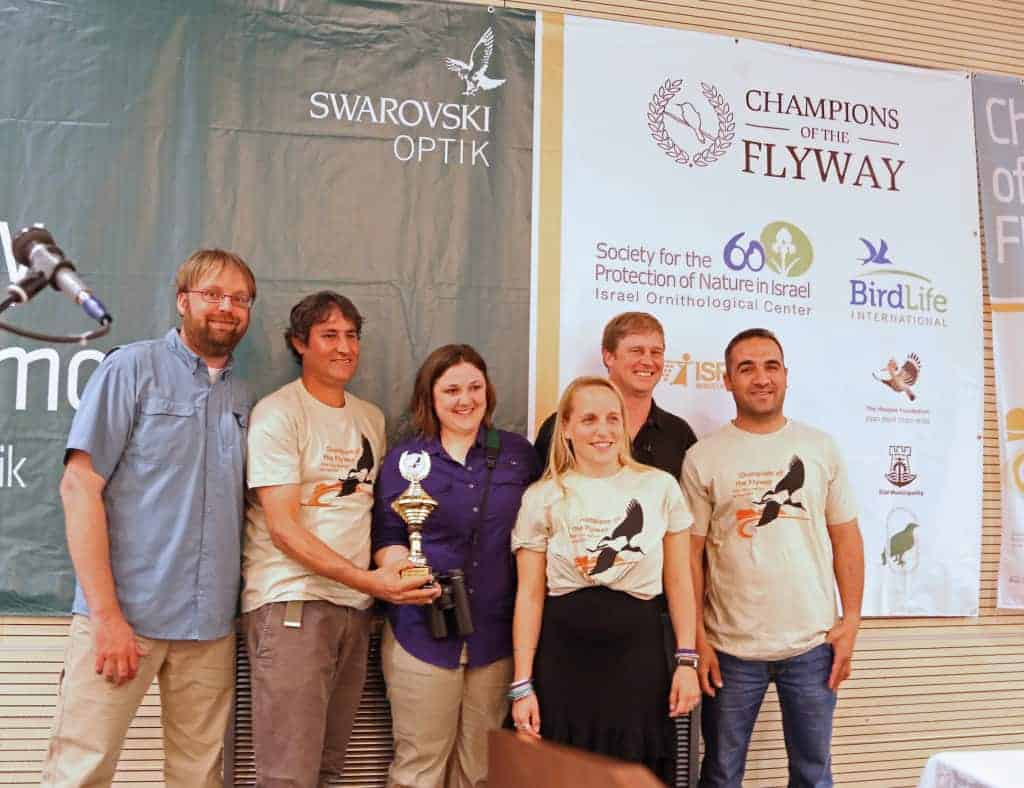 April 2nd, 2014. After an exhilarating 24 hour bird race, the final results were announced during the superbly staged Champions of the Flyway awards ceremony at the Eilat Hilton. The teams had acheived something quite remarkable, a cumulative total of 249 species, representing more than half the birds on the Israel list and twelve more than during the entire Eilat Birds Festival in 2013.

Champions of the Flyway

Leading the field with an incredible 169 species were The Palestine Sunbirders, a crack team of collaborating Palestinian and Israeli birders. Recognising the advantage they held with their considerable local knowledge and experience, they magnanimously shared the coveted title “Champions of the Flyway” with the highest scoring international team – the outstanding Cornell Lab of Ornithology eBirders whose total of 165 was a quite remarkable achievement. The International team in second place was The Digital Stringers with a very creditable 159 species and, in third, the highly-skilled Birding Frontiers team recorded 155.

Guardians of the Flyway

Champions of the Flyway is not just about racing, it is about celebrating the miracle of bird migration and raising funds to protect the amazing spectacle for generations to come. Every race team has contributed a tremendous amount and we thank them all. Nearly $60,000 has already been raised through the race and contributions are still arriving. If you would like to show your support too, please donate here.

The team raising the most funds – The Flyway Racers received the award “Guardians of the Flyway” for an outstanding contribution in excess of $12,000 – Thanks so much for your considerable generosity!

Knights of the Flyway

The third trophy presented at the awards ceremony was for the team enabling others to see the most species, enjoy the event and promote the cause. “Knights of the Flyway” was awarded to the highly popular Focusing on Wildlife Sprinters.

In the spirit of the award they received one of Swarovski Optik’s brilliant new SLC 8 x 42 binoculars to donate to the BirdLife Partner of their choice.

Of particular note is that the Sprinters also received donations from more individuals (96 and counting) than any other team, through their outstanding promotions.

The Batumi Raptor Crew, representing Bird Conservation Georgia, receive a cheque for $30,000 presented by Angelo Caserta, BirdLife’s Regional Director for Europe and Central Asia. These funds have been raised by sponsors, participants and supporters of Champions of the Flyway and will help fund innovative conservation actions that will protect birds of prey migrating through the Batumi Bottleneck in Georgia.

“While the race was great fun, the goal was serious – to raise conservation funding that will help BirdLife International tackle the illegal killing of birds in Southern and Eastern Europe.”

For those reading about this worthy cause for the first time today, please click on the following link for more information.

Don’t delay: Do it today!

This article was first published on the “Champions of the Flyway” website.

Thanks, Kathy. It was great fun!