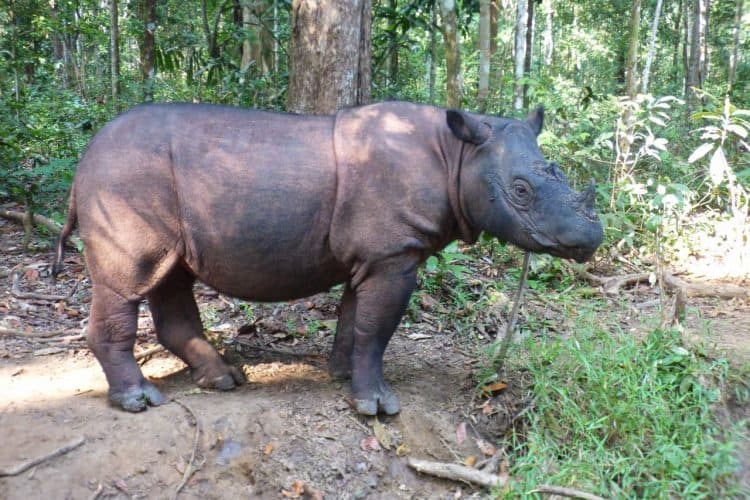 The Sumatran rhinoceros Dicerorhinus sumatrensis is on the verge of extinction. Decades of well intentioned, “politically correct”, conservation activities have not changed its demise’ trend. Moreover a reversal of the situation is not going to happen in a few years unless the policy is changed.

Due to a persistent status quo no rhino’s captures (but one) materialized and almost no reproduction of the very few rhinos left, mostly isolated individuals unable to meet and hence to breed, took place (Shaffer et al. 2020).

A proper adjustment of present condition should have to be drastic.  Time is of the essence and innovative management and tactful approach by involved parties are a prerequisite for success.

A government declares a State of Emergency when it believes a natural disaster occurred or may be imminent. This ad hoc declaration would make resources immediately available to rescue and quell disturbances in affected localities where the last rhinos survive.

Despite urgency has been confirmed, nobody has considered to accurately enforcing a specific status of emergency for the species.

Have the successes with the Californian condor Gymnogyps californianus, the European bison Bos bonasus, the White oryx Oryx leucoryx and other endangered species teached us nothing? Why waiting for just a handful of individuals to be left before starting species management? The Thylacine Thylacinus cynocephalus, the Quagga Equus quagga quagga, the Malaysian population of the Sumatran rhinoceros Dicerorhinus sumatrensis harrissoni, amongst others, are forgotten examples of ill fated guiding principles.

A state of emergency declared and guaranteed by Government Authority, should induce the rampant bureaucracy to put on hold threats to the species survival, e. g the construction of new roads (Hanafiah 2020) where the Sumatran rhinoceros survives.

During emergencies government staff and wildlife managers should have to priori-tize efforts by focusing on the rescue of as many rhinos as possible by capture and translocation to safe controlled breeding centers. People in charge can take prompt decisions.

To ensure animals are properly integrated into the emergency planning process the following protocol is recommended:

This is the momentum to take vital decisions for the Sumatran rhinoceros conservation. Means are available, people and knowledge too. Who is going to step forward with new initiatives and wake up a critical state of the affairs?

Letter to the Editor by Francesco Nardelli, Member IUCN/SSC Asian Rhino Specialist Group and Patron Save the Rhino International. The views expressed are those of the author. Lead Image: Sumatran rhinoceros Dicerorhinus sumatrensis (Photo credit: SRS)