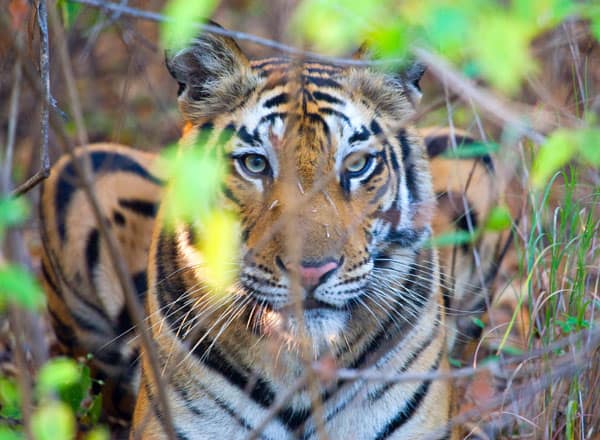 I was absolutely sure: there were NO Tigers in Bandhavgarh. Despite being one of the most hailed Tiger reserves in India and promoted with quotes for the National park like “you are unlucky not to see a Tiger in Bandhavgarh”, I was certain: it was a hoax! A tourist trap.

I had taken 8 safari’s already in the park without seeing a sniff. Of course I had seen pugmarks on the road, but I also saw forest guards walking with sticks in the park. As far as I could see the Tiger pugmarks were made by the forest guards, just to give tourists an idea that Tigers were around. All the other guest who were staying at the fabulous Monsoon Forest lodge had seen Tigers of course, but I was convinced that they had seen plastic dummy’s that were mobile steered on remote control devices that were also controlled by the same forest guards. The photo’s the tourists showed me were previously taken in a zoo of course. One time I had heard 4 young Tigers cubs in a Bamboo patch but as far I could tell that was a tape playing with pre-recorded cub sounds; just for passing vehicles, to give them hope.

Bandhavgarh consists of a five zones, three that are accessible for vistiting cq paying tourists who were also buying the hoax: Tala, the main Tiger zone, andMagdhi In both I had seen zero Tigers. And there was Kitouli, an area where nobody went to because there was nothing to see.

The ninth safari didn’t start too well; the driver was a half hour late,we had to pick up two other tourists, and before we could get the tickets there was some confusion about payments for the park fee that costed some precious time. If you wake up at 4.30 you want to be in the park when it opens, otherwise there is no point in getting up so early! Finally we were off, well after opening hours, and it turned out that we were also going to Kitouli instead of the two core zones – the area where no ones goes because there are so very veryfew Tiger sightings…

I had given up the idea that I was going to see Tigers that morning and actually was looking forward to visit the Kitouli area because I could dream the empty Magdhi roads by now and a newfresh surrounding is always good. I wanted to see how the landscape look liked compared to the other zones. Besides, there were only 2 cars going in this area (instead of the 44 that tour around the dusty roads ofMagdhi) so we had the whole area for ourselves – which I prefer.

The safari started promising with an alarm call from a Spotted Deer that usually means a Tiger is around, and some Muntjacs in the forest, a small deer species that I hadn’t seen before in the other zones. We just took a road into the forest which looked great, looking for signs of Tigers. We came along a small guard post; this area is divided by the ‘main’ road, and both sides were blocked by bars which had to be opened. We crossed the road and drove on but still no sign of Tiger, eg pugmarks on the road or alarm calls of Deers or Monkeys.

It was all very quiet in the forest and after driving through a scenic river we moved on through a bamboo desert – thick vegetation with no decent views of the forest undergrowth so mostly crossed fast by car – because there is nothing to see.

I was standing in the back of theopen and small jeep, enjoying the moment, taken in all the smells and sounds of the jungle when suddenly all the people in the jeep where brutally taken back to reality when a deafening roar came for the left side and, as if appeared from nothing, a huge orange cat with black stripes was standing next to the car. A big female Tiger had charged the car whilst driving past! So overwhelming was the experience that I had fallen back into my seat looking straight in the eyes of a Tigress just two meters away! Wow!

The car stopped a few meters further on and the Tiger gave another roar and stepped back into the jungle. Before I could say anything the driver reversed and drove straight back to the place were she went back in. I considered this not a very good idea given the charge that she made. We stopped and saw the female lying in the bamboo,starring straight back at us. What an animal! I had the feeling that she was going to charge us again so I sat on the bench as far away as possible, grabbed my camera and started shooting. The Tigress was not at ease and she gave a few deafening growls and a good look at her teeth. Which are big at just five-six meters away. And then she had it, with a load roar she leaped out of the bamboo and charged the car again! The driver was just in time to drive off with spinning wheels which stopped the Tiger in her tracks.

Stopping thecar50 meters further along the road, we looked back and sawthe Tiger stepping onto the road, looked at us and decided to walk on the road away from us, occasionally looking back over her shoulder to see where we were. She did some littering at the base of a tree, looked up and she disappeared from sight when the road made a corner.

Slowly we drove closer up to the bend, expecting here to see her still walking on the road, but she was gone! Puzzled we stopped in the bend. Something made me look to the right and hidden in the bamboo I saw an orange shape ready to leap! I hid the top of the car car yelling ‘GO! GO!GO!’. The driver spun off with the Tiger jumping on the road, roaring, where we just stood, and this time chasing after the car!

After 50 meters she gave up and some 100 meters further we stopped. All in the car gasping and all visibly shaken! This was no ordinary encounter! The Tigress started walking slowly towards the car. That was better. The driver turned off the vehicle to avoid shaking to make better photo’s. That was for some reason an ignition for the Tigress to make another charge. This time she took no prisoners. At full speed and full power she made a run for the Jeep, this time with no holding back! The car came at life and again with spinning wheels we drove of with the Tiger in pursuit for some 100’s of meters until we made a huge gap.

The Tigress stopped finaly and if nothing happened she finally strolled back into the bamboo, no doubt satisfied that she had won.
We never saw here again and we made sure that we didn’t by driving straight back to the guard post at the main road where we all had to sit and relax for a while, contemplating about the extraordinary wildlife encounter we had witnessed. A once in a lifetime experience!

So there were Tigers in Bandhavgarh!

The female Tiger, just a nano second before she charged us…

Marc Guyt is a Dutch photographer and owner of birds & nature stock agency AGAMI.A Wanderer by birth, Marc has always made his way to the door searching for new adventures. Even at three years old he sneaked out and left his parents searching and they usually found him somewhere near an open area or some water edge. The need to see for himself was strong.The combination of Birding, photographing and travelling has brought him to many stunning places on this beautiful globe, and it will bring him no doubt in many more. It is in his blood.Owner of Dutch stock agency www.agami.nl.

Marc Guyt is a Dutch photographer and owner of wildlife stock agency AGAMI.A Wanderer by birth, Marc has always made his way to the door searching for new adventures. Even at three years old he sneaked out and left his parents searching and they usually found him somewhere near an open area or some water edge. The need to see for himself was strong.The combination of Birding, photographing and travelling has brought him to many stunning places on this beautiful globe, and it will bring him no doubt in many more. It is in his blood.Owner of Dutch stock agency www.agami.nl.