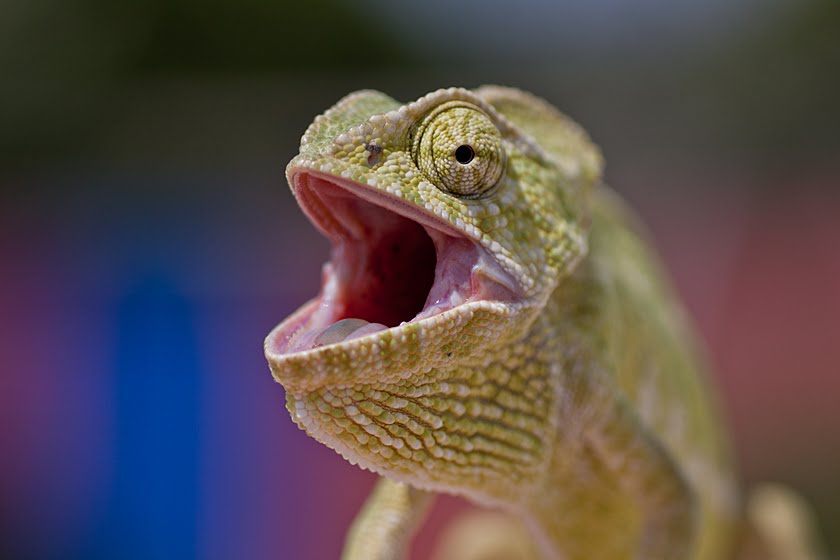 He’s back! Our Mediterranean Chameleon that visits our garden casually strolled across the grass as I was working outside yesterday. He looked up at me and walked slowly up to my leg. Amazed, I stared talking to him like some mad man. I then picked him up to see how he was and saw that he was in excellent shape. He didn’t inflate himself or hiss at me as they do when startled or frightened, but opened his mouth wide in a kind of half-hearted gesture. 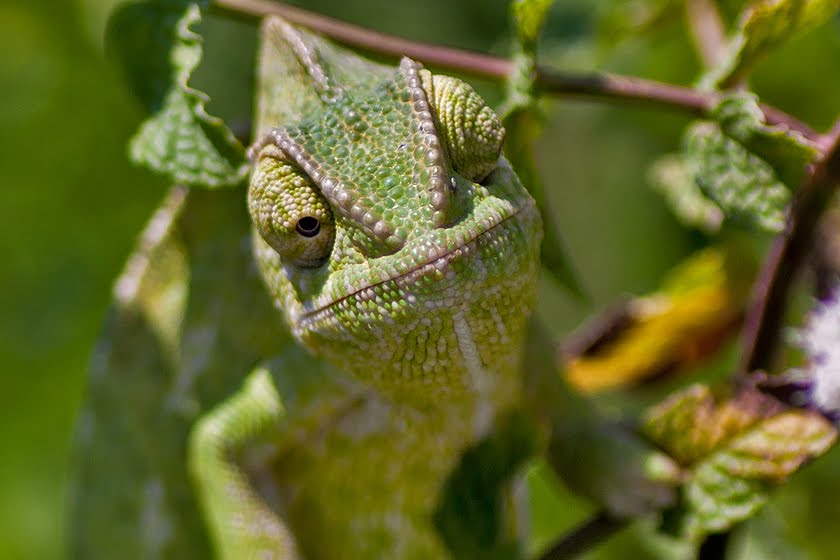 I had been photographing some of the insects on the mint bed earlier on, so my camera was at hand in the shade. Just in case any wanted to know what I’ve been shooting the recent macro subjects with, I use a 90mm Tamron SP DI macro lens at f/2.8 with my older Canon 50D body. 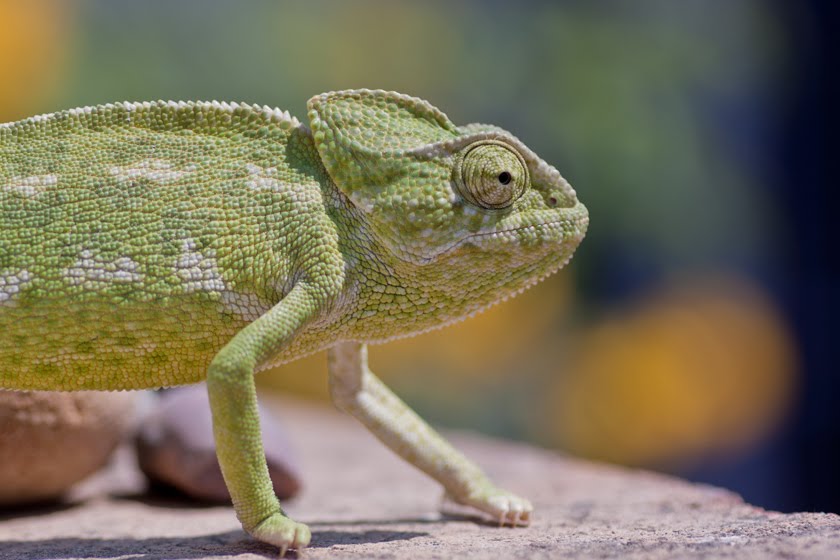 I started taking a few shots of him on the small wall then placed him on the mint while I settled down to see if he would hunt any of the insects as the flowering mint is buzzing with insects. 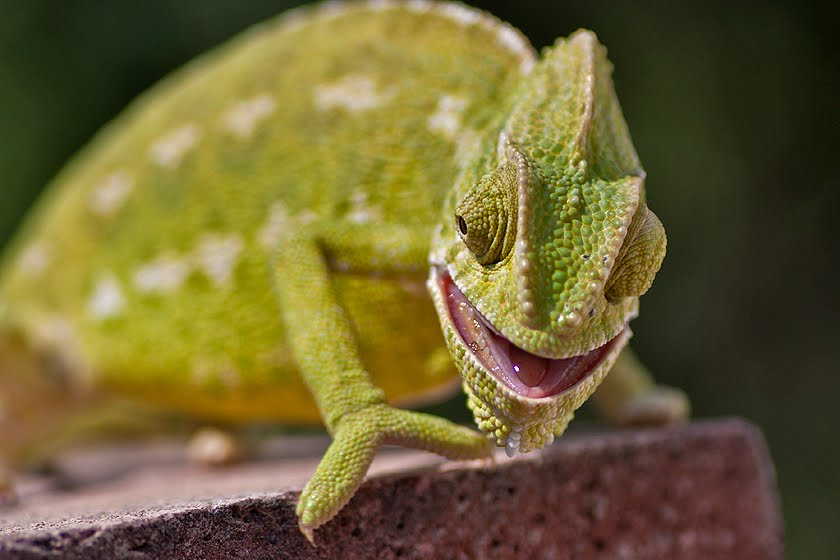 He quickly focused with one eye on a few wasps and inched forward to within striking range. The other eye was scanning the other side of the flower bed and some flies, beetles and butterflies were on that side. Their independent rolling of their bulbous, somewhat external eyes work a bit like some of those security cameras you often see on walls or ceilings. It’s a bit disconcerting to watch and I was wondering what insects if any he’d try and capture. 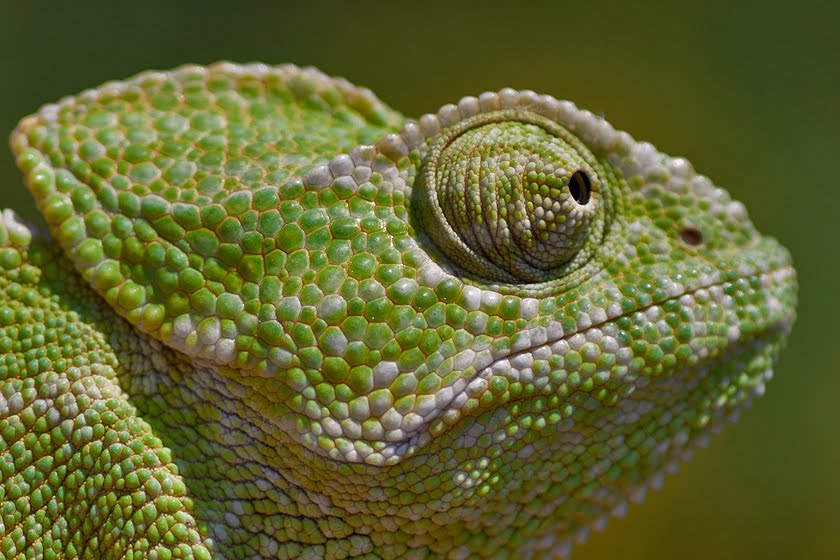 I waited and watched, fascinated by his eyes and taking in all the fantastic patterns and shapes of each of his reptilian scales. Chameleons have fascinating skin and his colour was almost matching the fresh greed leaves around the base of the plants and as he inched forward you could quite easily loose his exact position, but then he stopped again and stared at movement to the side. 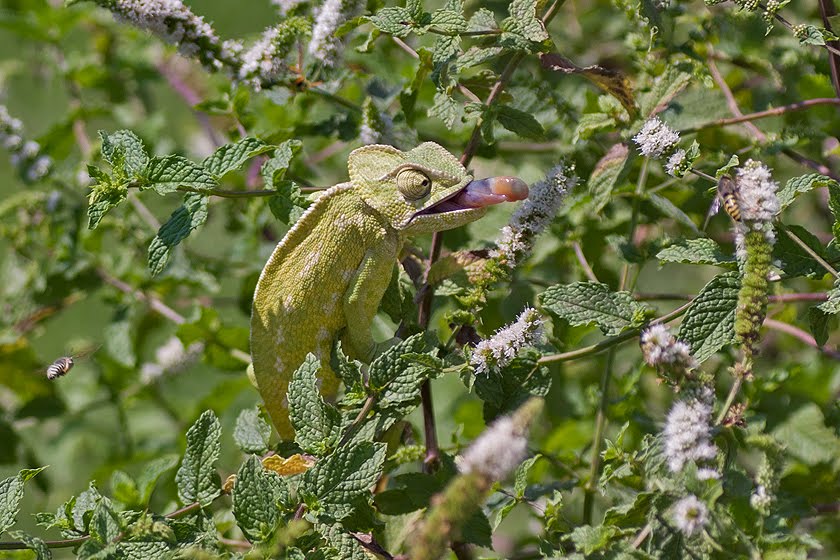 There was a wasp to his right and he was preparing to strike. I could see that he was bringing his long tongue up from the back of his mouth and adjusting it forward in a pile. A split second later he opened his mouth slowly and launched his long tongue out at the wasp, smacking it fully on the back with the sticky tip, then with the same speed, pulling it back into his mouth, letting the tongue go back but biting the wasp as it came onto the fine rows of tiny teeth. A few crushing chews later he swallowed the insect whole. I was so pleased to have witnesses something like this in our own garden, which was completely natural and not staged or set up in any way. 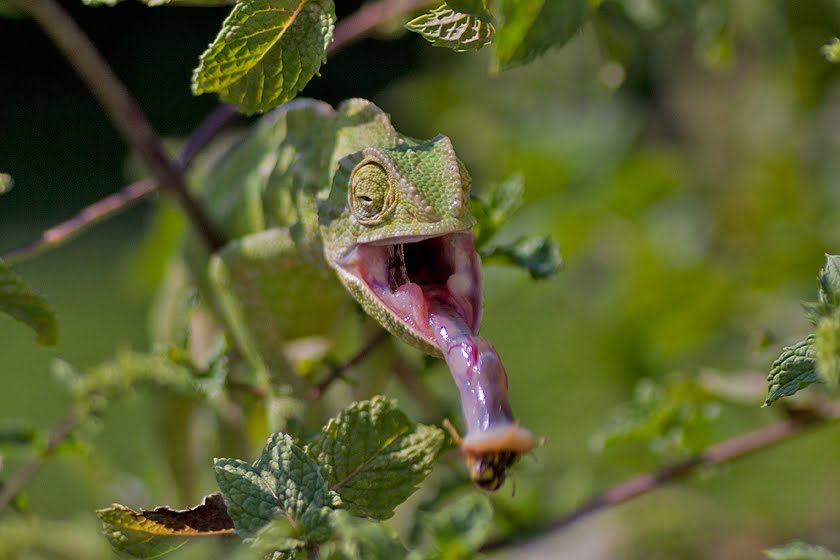 The Chameleon then put on a great show catching mainly wasp species and taking advantage of the high density of insect life. Amazingly I did manage to get some actions hots of him hunting. I used a very high speed for this at a 3000th/sec and was till too slow. In this shot I focused on the Chameleon rather than the wasp which was closer to me and managed to get an open view down the Chameleon’s throat just before he brought the was back and closed his mouth! All this in a nano-second and all the shots were hand held… When I looked for him this morning he wasn’t anywhere to be seen but the again they do have fantastic camouflage and he was probably sleeping off yesterday’s feast…