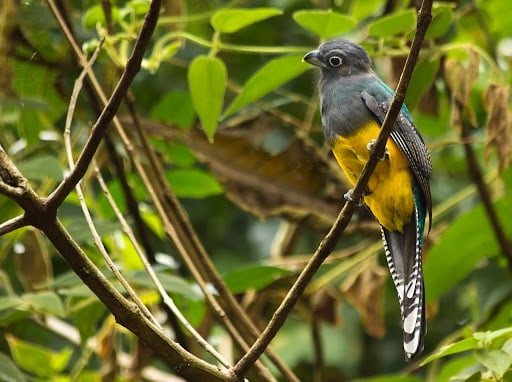 Want to restore a degraded forest? Why not let the birds do the work! Find out how – with a little help from BirdLife – some of Brazil’s most threatened birds are coming back, and bringing the whole forest with them…

When you think of Brazilian forests, the Amazon is probably the first place that comes to mind. But Brazil is also home to the Atlantic Forest, which originally covered about 15% of the country, and where 72% of the Brazil’s 200 million citizens now live.

The Atlantic Forest was once a continuous swathe of green, but was rapidly cleared and converted into sugarcane plantations, pastures and cities, leaving small patches of vegetation scattered along the east coast of South America. Today, just 12% remains in Brazil. These forest islands are the final refuge for a large number of bird species, many of which are threatened with extinction. Of the 1,919 bird species in Brazil, 891 (nearly half) can be found in the Atlantic Forest.

The forest patches in northeast Brazil are currently under the greatest threat. Tragically, the region has just lost two of its unique bird species: the Alagoas Foliage-gleaner Philydor novaesi and Cryptic Treehunter Cichlocolaptes mazarbarnetti were declared officially extinct by BirdLife in 2019. Yet despite this bleak situation, there is still hope to turn the tide on extinction with other species.

Serra do Urubu and Murici are two Important Bird & Biodiversity Areas found 100 kilometres apart, with only a few small forest patches between them. Murici is home to 242 bird species, 17 of which are threatened – including the Alagoas Antwren Myrmotherula snowi (Critically Endangered), which has a population of fewer than 50 birds.

This alarming situation first drew SAVE Brasil to Murici in 2000 to secure protection for the area. Working with its partners, in 2001 they helped to establish the Murici Ecological Station, run by the Brazilian Environment Federal Agency.

However, even though it was officially declared a protected area, key parts of Murici’s conservation plan are still not being carried out properly, and the forest is still vulnerable to being degraded and encroached upon at its edges.

At the other end of the ‘corridor’, SAVE Brasil purchased land in Serra do Urubu in 2004 and turned it into a private reserve, kicking off a bold conservation project. With a tried-and-tested combination of community engagement, on-site monitoring, restoration, bird surveying and ecotourism, the project has been successful in keeping Serra do Urubu’s trees standing. In addition to halting timber extraction, conservationists have restored 40 hectares of degraded forest – with dramatic results. Back in 2005, only three bird species were recorded at this site, but today more than 70 species can be found here. These include fruit and nectar-eating birds (such as nine species of hummingbird) that spread seeds and fertilise flowers, further replenishing the habit’s plants in a beneficial cycle.

Birds are exceptional indicators of a site’s biodiversity, because they are well-studied and respond quickly to changes in the world around them. By looking at birds, we can learn about the the type and quality of vegetation, the lie of the land and even the altitude. Learning from the successes of Serra do Urubu and using birds as indicators, our next step is to connect the corridor between the two forests. Supported by BirdLife International/Aage V. Jensen Charity Foundation and WWF-Brazil, our new project aims to restore 70 hectares of Atlantic Forest between Serra do Urubu and Murici between by the end of 2022. By planting trees and protecting habitats we will attract more birds, and just like before, the birds themselves will do the rest of the work in regenerating these ecosystems.

Meanwhile, over in southeast Brazil, SAVE Brasil is working on a different approach: battling local extinctions in order to stop a species from dying out entirely. The Black-fronted Piping-guan Pipile jacutinga was originally found across Brazil, Argentina and Paraguay. But today, poaching and habitat destruction has driven it from all but a handful of forest patches, and it is now Endangered.

In response, SAVE Brasil launched a project to reintroduce the guan to locations were it had become extinct. Starting in 2010, researchers bred birds in captivity and, in 2016, began releasing them in three patches of well-preserved protected forest inside the species’ original distribution. Once again, the recovery of this majestic bird helped to restore entire forest. The Black-fronted Piping-guan swallows the fruits of more than 40 tree species whole, dispersing large seeds that other birds cannot. This helps to fight climate change by aiding the regrowth of forests, especially large tress that absorb more carbon. One of its favourite foods is the Jussara Palm Euterpes edulis, a threatened species in Brazil, and a victim of heavy illegal logging. By bringing back the guan, we are bringing back this tree, and many more.

Over the past 5 years, this successful project has created a model that can be replicated in other sites across Brazil, Argentina and Paraguay. Since 2016, researchers have housed 75 birds in partner zoos and breeding facilities, and released 30 individuals across three sites. The released birds are monitored using radio transmitters, and also observed in person by local citizen scientists. The project also has a strong education and outreach component – including publications for students and teachers – and has reached more than 12,000 people. Besides its ecological role, the Black-fronted Piping-guan is proving to be a charismatic flagship species, helping to engage communities in the conservation of the entire Atlantic Forest.

The project is now getting ready to release a new group of Black-fronted Piping-guans. These birds have been undergoing training over the past two months in a large enclosure that mimics their natural habitat. During this training, the birds learn to eat the food they will find in the wild, improve their flying skills and recognize potential predators. Once they are released, they will be able to join their fellows in fulfilling their natural role in the ecosystem.

We are about to enter the UN Decade on Ecosystem Restoration, running from 2021–2030. The Atlantic Forest and its birds give are the perfect way to demonstrate that, with collective efforts and innovation, it is possible to save the world’s biodiversity before it’s too late.