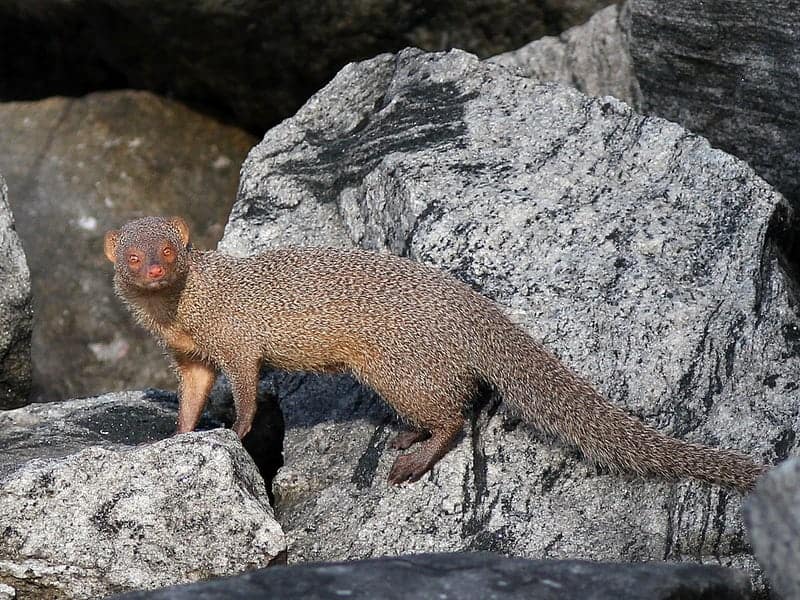 This nightmare situation is again being potentially reenacted with the escape in Tonga last month of six small Indian mongooses that hitched a ride from Fiji inside a shipping container along with assorted hardware supplies. It was not inspected until after a startled local realized the super large rat he was watching was actually a big mongoose. In a lesson for the future, Tonga Quarantine was not called immediately. They subsequently learnt of the six stowaways. Two were dead, one killed by the staff of the importing company and another by a close by trap. But two escaped and while they have been seen, they are still at large.

Tongan Quarantine and Environment agencies together with regional partners SPREP, BirdLife International, Island Conservation and the Pacific Invasives Initiative coordinated in providing an immediate response to the incursion. The BirdLife Pacific Invasive Programme Manager Steve Cranwell joined Viliami Hakaumotu from Tonga’s Environment Department and Graham Mala’efo’ou and Siutoni Tupou from the Quarantine Division in establishing a network of traps in the area the mongoose escaped into. Located in people’s backyards and areas where the mongoose are most likely to be active these traps have been maintained continuously for the past three weeks. An awareness campaign has also sought information from the public on sightings.

The latest sighting was on Monday 25 July in a drain near the site they escaped from. They are clearly using this drain network to move around the area and it is proving difficult to trap them. However, the ‘good news’ is they appear to have remained in the area the trapping is concentrated in and with some modifications to the trap placements, persistence and a bit of luck there is hope they will be caught.

Mongoose were deliberately introduced to Fiji in 1883. Sugar planters imported the small Indian mongoose from Jamaica to four Hawaiian islands and to the Fijian island of Viti Levu where they subsequently established.

“The theory was that mongoose would help control the rat population that was a problem for the sugar plantation. But like so many introductions of one predator to control another this did not work, mongoose are only active during the day and sleep at night and rats are mainly only active during the night, so they never really meet,” he said.

Steve Cranwell said that in Fiji, mongoose is implicated in the extinction of at least one of its native ground birds and the extirpation of others. The barred-wing rail was common in 1875 and within a few years of the mongoose introduction (1883), the rail was never seen again. They’re also a problem for other wildlife and are linked to declines in Fiji’s endemic ground frog and are a problem for chickens. “Wild junglefowl common throughout the Pacific including Tonga are rare on islands with mongoose, and it’s likely if mongoose establish on Tongatapu it will be difficult to sustain free ranging chickens there too,” said Steve. They are also a danger to people’s health as they can carry and spread diseases such as leptospirosis and rabies.

A situation that further highlights the invasive species crisis for Pacific Islands and the importance of prevention in protecting the Pacific way of life. A story we remain hopeful will end well…

This article was first published by BirdLife International on 31 Jul 2016.

I fear it is all due to global warming and the Illegal wildlife trade.

As always these are catostrophic problems. They must best be avoided in the first place but once happed should be dealt with as best it can.