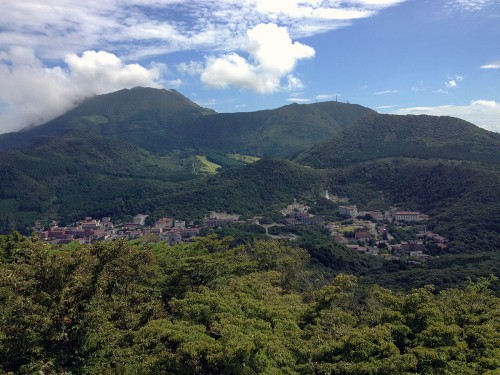 Rising up 870m and situated just to the west of Mount Unzen, Mount Kinugasa has a magnificent 360 degree panoramic view of the Shimabara Peninsula. To the east is the hot spring town of Unzen and then the peaks of Mt Unzen itself; to the south are the Amakusa Islands; to the west is Tachibana Bay and Nagasaki, while to the north is Isahaya.

Mount Kinugasa is also one of the more easily accessible peaks in the Unzen range, with a well-marked 2km trail leading from the carpark at Shirakumo Lake. The hike up takes about 25 minutes or so.

Kinugasa was itself an active volcano that erupted hundreds of thousands of years ago, and now serves as a weather station mainly for monitoring winds but also for collecting other basic data such as air temperature, humidity, pressure, rainfall, hours of sunlight, etc. The summit has a lawn area about 30 metres square; an observation balcony that overlooks Unzen hot spring town; and the main panorama observatory tower.

There is no shade or shelter, however, unless you want to sit under the tower itself (no view from there!), so you are pretty exposed on the top. For birders, Mount Kinugasa’s attraction is that it is one of the points to watch migrating Chinese Goshawk during September. Other migrating birds also pass by, such as Oriental Honey Buzzard, Grey-faced Buzzard, Asian House Martin, Pacific Swift, White-throated Needletail, but it is for the range-restricted Chinese Goshawks that it is the most popular.

However, as some other raptor migration observation spots are more reliable and famous (such as Uchiyama Pass, Tsushima; Mt Hiyamizu, Sasebo; Osezaki, Goto Islands), the top of Kinugasa is usually pretty deserted even during September – just the way I like it!

Late this morning I hiked up and started observations at 11:30. Things were pretty quiet and there was no real wind to speak of. What wind there was was changing direction all the time, and basically went from NW to SW to SE to NE and then back again…when I left it was coming from WNW but winds this slight would not have much impact on migration. Anyway, at 13:30 as I was watching a Eurasian Jay on the west flank of the mountain, I suddenly noticed a fast approaching shape out of the corner of my right eye. I turned and saw a blur hurtling toward me and managed to get the camera up and focused as it came on in – a juvenile Chinese Goshawk! I took a burst of shots as it flew low straight over my head and then turned in time to see it bank sharply and try to snatch a dragonfly in mid-air…unfortunately it failed to grasp the dragonfly properly, although it seemed to have dealt it a killer blow. The young raptor then soared up, gained elevation and headed on south toward the Amakusa Islands. I immediately scouted the area to the north and east, expecting other birds to be close behind but, alas, it appeared as if this goshawk was alone.

After that the conditions got murkier and murkier as the sun lowered behind increasingly thickening high-altitude clouds. But at 16:00 I observed another six Chinese Goshawks on the west flank of the mountain. Again, it was impossible to determine whether the birds were juvenile or adult or a mix, as they were silhouetted by the late afternoon sun….. Soon afterwards I called it a day and hiked back down to my car. But I was satisfied – any sightings of Chinese Goshawks in Kyushu are very rewarding! However, this is probably toward the end of their migration, so I doubt if there will be many more chances to spot them this year.