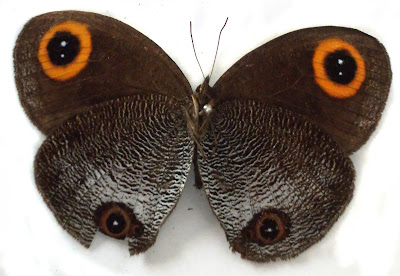 Dibang Valley in the North Eastern State of Arunachal Pradesh in India is gifting many pleasant surprises to butterfly lovers recently. There were two very rare rediscoveries reported from this area in 2012 and now a researcher has described a new butterfly species from this valley of lush greenery.

According to a study published in the Journal of Threatened Taxa , a new butterfly species is described from Mithun Valley of Upper Dibang Valley in Arunachal Pradesh recently. The butterfly which belongs to Callerebia genus, is named as Callerebia dibangensis , after the biodiversity rich Dibang Valley.

However, Purnendu Roy, who discovered the new species, decided to offer the right to give it a common name to the local people of the valley. Usually, those who describe a new species, offer a scientific name and common name for a species. Perhaps, the butterfly already have a local name, since the weaving patterns in the local culture are known to be influenced by the patterns of beautiful butterflies in the area, says a press note on the species discovery.

A combination of very distinctive characters like large size; highly rounded wings; striking under hindwing white scales; distinctive under hindwing tornal ocelli (an eye like marking on the posterior corner of the wing); large round orange spot on the anterior corner of the forewing and a dark brown underground colour distinguishes Callerebia dibangensis from its similar looking relatives in the Callerebia genus, says the study.

Though, the butterfly was spotted in 1987, it took almost 26 years to describe it scientifically. Interestingly, within this period, no other researcher/naturalist zeroed in on it. The area is considered one of the most remote places in India, due to recurring landslides during tough weather. According to experts, it could be a reason why very few butterfly surveys have taken place here so far, which in turn left this species overlooked for so many years.

However, there could be more surprises waiting nature lovers from Dibang valley. “If in a well studied group such as butterflies a new species has been overlooked then I think it does illustrate that more new species especially in the less studied fauna will be discovered. There is certainly a need for more systematic studies so that a greater range of altitudes and seasons are covered.”, says  Roy.