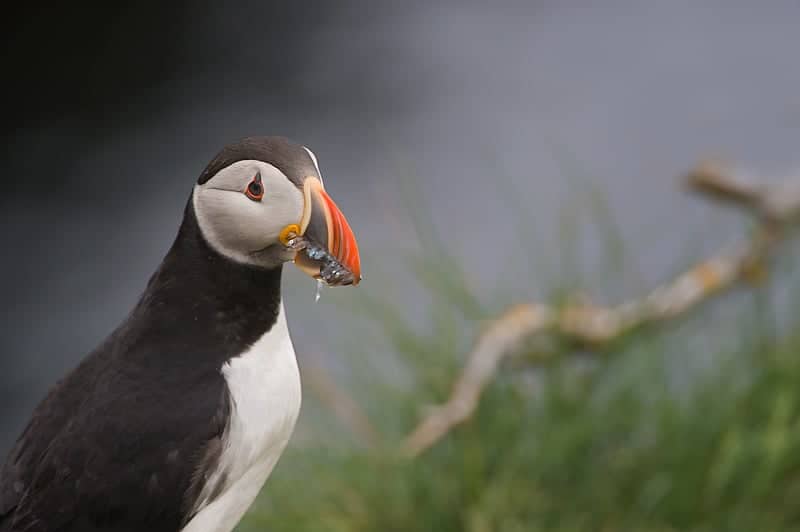 This land of fog and icebergs is jut a few hours North of us by plane. We visited last year and decided to make it a regular destination. Wherever you look, there are lakes and pines along the road, and the pristine environment captivates the visitor as much as the friendliness and hospitality of the people.

This trip included an adventure for us. We had been granted a permit to land in one of the islands forming the Witless Bay Ecological Reserve. The reserve is formed by four Islands, Gull, Green, Great and Pee Pee. The Division of Parks and Natural Areas, in an effort to protect nesting birds, only grants a few permits and year and you must go in the company of a biologist, which was a blessing, because we learned a lot from our knowledgeable guide, Tony Power.

The permit allowed us one landing during a three day period, making allowances for bad weather, since the condition for landing, no dock and big rocks, call for fair conditions in the ocean.

We arranged for the Zodiac to take us there on a good day, and a few minutes later we landed on a cove that granted reasonable access. I am not a good climber, so it took me a while and the help of my husband and the biologist to finally make it up the first climb of rocks. Phewwww, I’m not getting any younger, but these experiences are sure rejuvenating. I kept thinking, if I get out of this, I’ll be a better person. Well, no sense in boring you with my perils.

Next climb was the Herring Gull colony, some of them with chicks. The routine is to hold the tripod or a walking stick over your head, to discourage attacks if the birds feel we may be a threat. Luckily we did that part without any incidents.

What joy it was to climb through untouched terrain, ferns at your side and the sounds of birds all around you. Puffins were at the top of the island. They nest in burrows in the grass and the trees sustain damage from this practice. This time of the year, mid July, there were chicks in the burrows, so it was relatively easy to spot parents carrying fish.

We set up in separate places, in areas designated by our host, and tried not to disturb the birds and pay attention to the ground and the presence of burrows.

Pretty soon we had a bunch in front of us, very relaxed and totally unconcerned by our presence. It was easy to get images of one, two or even a bunch, with or without fish. The backgrounds could be as diverse as black rocks, white sea foam or yellowish lichen. Since I was using Aperture value as a camera mode, I compensated accordingly, minus for dark backgrounds, plus for lights and mostly even for the lichen. Since the day was overcast, we didn’t have problems with exposure of the whites even if it was close to noon.

After a while, we changed locations to avoid disturbing the birds there, and the new place, a little higher and a little more in the open, gave us a better chance for flight images. Since we had overcast conditions, all the images were high key, with white skies, which is not too bad for my taste. I could always use Viveza, the PS plugin, to make the sky blue. 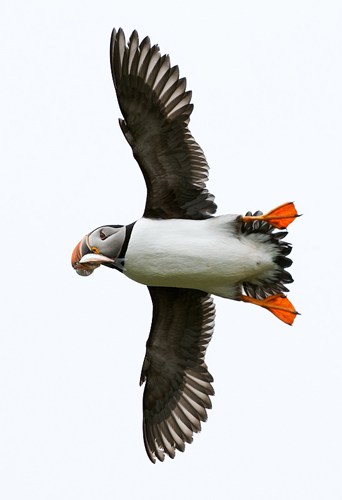 Puffin in flight with fish.

A couple of hours later, happy and with many images as a result, we headed down, thankful that we had visited this incredible place. We made it to the Zodiac without incident and the trip back was great, since the wind had not picked up yet, as it did later in the day and for the reminder of our stay in Witless Bay.

Our next adventure was another Zodiac trip for whale watching. Sea was rough today, and we had to get the cameras inside the floating suit to avoid getting them wet, but again, the experience was thrilling. We were rewarded with a Humpback breaching a few times, something we had never seen, so we decided to give it a try once more the next day. Second time around, the sea was not as rough, but we had some fog, which added to the mood of the pictures. We saw tails, heads and fins, from a mother and calf, who took a liking to the boat and kept following us. The calf was especially playful, coming very close and even going under the boat. They are beautiful animals and to be able to see them free and wild is something we will always treasure.

The end of our trip was approaching. We headed for Cape St. Mary’s Ecological reserve, home to one of Newfoundland major nesting seabirds colonies.

Thanks to the Parks and Natural Areas Division, Environment and Conservation of the Government of Newfoundland and Labrador for granting us the permit.

Northern gannets, Kittiwake gulls, Common murres, Razorbills and others choose the Cape as their home, from approximately May to August. It is a very impressive rocky cliff that drops steeply to the ocean and is almost totally covered by birds, with hundreds of them flying about.

The month of July is by far the foggiest, with fewer clear days than May and August. Our Floridian sunshine followed us here and we had two clear days in a row. After a 1 km path from the Visitor Center, you arrive to “the rock,” where real estate is very scarce and it represents the ultimate nesting location for gannets. It is amazing to see them flying over it even if they nest somewhere else, probably thinking, “Geez, I’d love to have the little parcel to the left on the 7th tier.”

When the time came to go home, we were filled with the desire to come back again. It’s not easy to get tired of this place. We would probably pick July again, although icebergs don’t last that long. It is an enchanting land and one that visitors will always remember.

For more information on the reserves, please visit their website at: