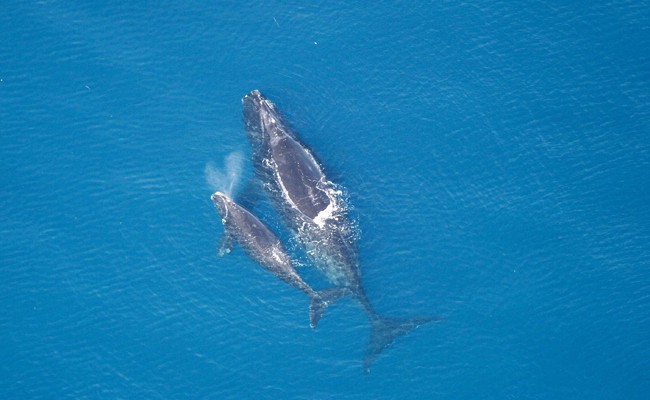 Scientists were already worried about the survival of North Atlantic right whales following a slew of tragic deaths over the past year. Now, even more concerns are being raised about the lack of calves this year.

Once considered the “right” whales to kill, this species was nearly hunted to extinction. Today, there are estimated to be fewer than 450 in existence, which has earned them the distinction of being one of the most endangered marine mammals on earth.

While right whales were protected under the Endangered Species Act decades ago, and kept safe from being slaughtered with a moratorium on commercial whaling, they have yet to recover. Today, they face a barrage of modern-day threats ranging from pollution, energy exploration and climate change to being hit by ships and entangled in fishing gear.

Entanglements and ship strikes are now believed to be the biggest threat to their survival, and are also believed to be responsible for recent losses. Over just the past year, 18 deaths have been documented off the coasts of the U.S. and Canada. Those losses were catastrophic for a population that’s so small, and raised concerns about their ability to withstand these pressures.

Still more concerning is that among the entire population, only 100 individuals are believed to be breeding females. Fewer and fewer calves have been born over the past few years, and this year there were none at all in their breeding grounds off the coasts of Florida and Georgia. Scientists think it’s possible that there may have been births that weren’t spotted, but it’s still unclear, and not looking promising.

“This is the worst-case scenario,” said Barb Zoodsma, a biologist who oversees the right whale recovery program in the Southeast for the National Oceanic and Atmospheric Administration. “This season appears to be a total bomb. You don’t have to be a math major to see that things are going in the wrong direction.”

The tragic deaths, combined with no births this year, have scientists predicting the species will go extinct by 2040 if drastic action isn’t taken in both the U.S. and Canada to protect them.

Canada recently added restrictions to its snow crab fishery and ship speeds in the Gulf of St. Lawrence, but right whale advocates argue they don’t go nearly far enough. In the U.S., conservation and animal advocacy organizations recently sued the National Marine Fisheries Service for failing to protect right whales from entanglement as they’re required to do under both the Endangered Species Act and the Marine Mammal Protection Act, and have continued to call for meaningful action that will protect them from ship strikes.

Hopefully increased public interest in the plight of these whales and pressure on governments to enact meaningful restrictions on the threats to their survival will help right whales rebound before it’s too late.

For more on how to help, check out Whale and Dolphin Conservation.

I HAVE NO WORDS ONLY DISGUST !!

Its is a stale truth the whales are on the list of the endangered wild life owing to the killing spree unleashed on them. it is pertinent to conserve and save these wild lives, more so, the killing should be discouraged.