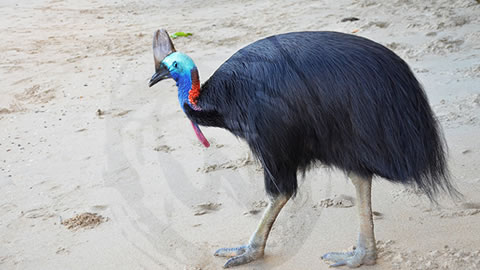 When we face wildlife – our deepest “parental love” will spontaneously rise with no apparent mental exertion from our part. It’s like observing a sign that says “Fresh Paint – Do Not Touch”, we impulsively have to test it.

These complex and voluntary events in our brain, can eventually deliver catastrophic results toward the next unsuspicious wildlife/nature visitor, as they come to have their rear end kicked by the almighty Cassowary.

Our reactions to the well known “puppy look”, is to show any animal our affection by submission, using a gentle and affectioned pat, or by holding them caress-fully or giving the ultimate reward “food”, so we can finally and effortlessly harness their presence and admiration.

Coming face to face with a wild Southern Cassowary while peering through your cameraviewfinder, gives your imagination and immediate sense of a Jurassic reality.

The boosting stimulus that this wild beast has you in his sight, triggers a fear within you that is absolutely relentless. With a majestic posture at 1.8 metres or 4.9-5.9 ft tall, powerful legs and a razor sharp inner claw in their feet, is as if you just came face to face, with a 21st century velociraptor.

All cassowaries species (the Northern/Southern and Dwarf) are usually shy birds of the deep forest, vanishing quickly in the blink of an eye. The adventurous attitude of the Australian Southern Cassowary species could be now imprinted, thus why more and more cassowaries in N. Queensland, are undaunted from having contact with humans, resulting in senseless road kills and dog attacks, just because our persistent actions.

When exploring these magnificent cassowaries sightings, please remember unnatural feeding poses the biggest threat to their survival and your absolute safety. Feeding no matter how small the amount is, will unintentionally lure the animal to remain dependent of the area and gaining the least fear of human interaction.

In an surprise encounter and believe me, when you least expect they will be appearing in front of you or running towards you, so never run away from them as theythey will outrun you at 50Km/h (31 mph).

Stand your ground, never move forward forcefully to an approaching cassowary as they will charge you as an opponent, keep an observing safe distance (that’s what zoom lens are for), show them your open hands (no food) and never loose eye contact or turn your back on a cassowary, unless safe to do so.

So please “Be CASS-O-WARY” and enjoy the following snippets montage, these were never broadcasted publicly until now, the “Cassowary” Chronological Vault at WildCAM Australia. Video is over 13 minutes duration.

If you enjoyed such unveiling, please let me know by leaving a comment on this page, there is also a possible continuum “cassowary releases and tracking” all depending on your valuable feedback.
Also I will be presenting soon a segment on the Australian Saltwater Crocodile, “Armoured and Dangerous in Cairns ©”.