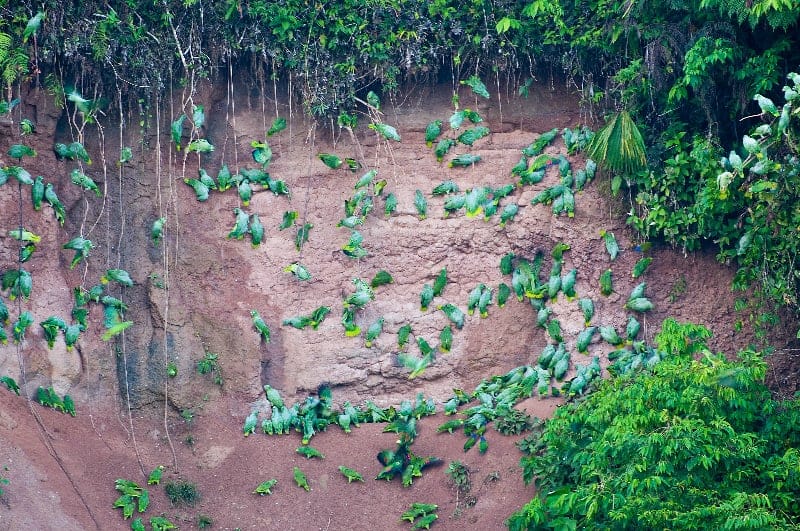 Many of the seeds and nuts found in the rainforest have toxins in them and animals come to clay licks to neutralize those toxins. This is a daily ritual for many birds in the Amazon.

Ecuador has two of the most accessible clay licks in the Amazon and both can be visited on the same day. The clay licks are in Yasuni National Park along the Napo River. Technically, the Napo Wildlife Center owns the land on which the clay licks are located but visitors from other lodges frequent them as well for an additional charge.

The first clay lick becomes active at around 7:00 in the morning on non-rainy days. It is located on the banks of the Napo River. Five different species of parrots frequent this clay lick including the Dusky-headed Parakeet, White-eyed Parakeet, Blue-headed Parrot, Yellow-crowned Amazon Parrot, and the Mealy Amazon Parrot.

The morning of our visit this clay lick was quite active. We saw four of the five species mentioned above in the hour or so that we were at the lick. All told there were hundreds of birds flying to and from the lick and the sound was tremendous.

The second clay lick becomes active at around 10AM in the morning. To get to this clay lick you need to hike through the rainforest for about ½ hour. It’s a very nice walk and we spotted some nice critters along the way.

Once at the clay lick, visitors sit in a covered shelter about 75 yards from the clay lick and wait. Because this clay lick is in the forest, the birds are very wary of predators and can take hours to get up the nerve to fly down to the ground. The whole process is pretty fascinating because when you arrive at the lick, you can hear the birds high in the trees. Then, over time, the sound gets louder and closer as they fly down lower a branch or two at a time. However, it is not until they are almost at ground level when you can finally see them and the sound intensifies.

Because this lick is at ground level, some mammals have been spotted here including Tayra and Tapir so it is very important to be quiet at this location and stay low in the shelter since you don’t know what will show up. Once the birds come though, the quiet is lost. The sound of hundreds of birds in this natural amphitheater location is deafening.

Here is a short video of both clay licks:

Anyone venturing to the lodges along the Napo River must make a stop at these licks. Even non-birders will be in awe of this fantastic experience. For more pictures, videos and trip reports please visit my website: http://www.focusedonnature.com/

Thanks for posting great Images and videos.

Thanks for posting great Images and videos.

You are welcome Charlie. This experience was fantastic and I am glad that I could share it.

Alan-
Thank you for sharing these photos and videos. Life is such that I will never see the sights in person. It was delightful to be able to visit vicariously through you. Thank you!