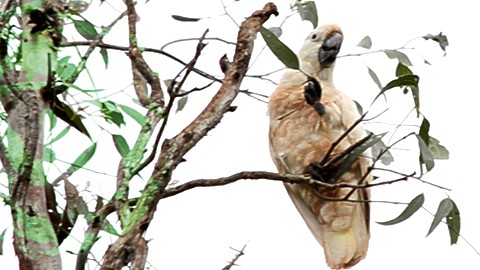 Laterality is the motor and sensory controls in our body.

In another words in humans is mostly identifiable as utilising either the right or left side of our body in our motor and sensory control. Most humans are right handed, although the trend from decades ago has undergone some social changes, it is said that the right side of our body is generally stronger than the left. Although it is also suggested that the left side of our brain is more dominant over the right side, because somewhere around 90-92% of humans the left hemisphere is the language hemisphere.

So in theory, if you where born with a tendency to use more your left side, but under the early social enforcement you were made to use the right side of your body, you may find it interesting that you actually have better natural aptitude to understand and develop a multiculturalism advantage when it comes to learning other languages.

But do our feathery friends i.e. parrots also have these favourite motor control tendencies?

Yes they do, and laterality in animals in this case parrots is also called limb dominance, therefore they tend to favour one foot when grasping objects i.e. Sulphur-crested Cockatoo, when feeding and occasionally drumming for nesting a female such as the Palm Cockatoo.

Well I do appreciate this laterality, it is like being able to drive a car on different sides of the road – Thanks “Napoleon Bonaparte” you understood the beginnings of laterality in Europe, but only some see why.