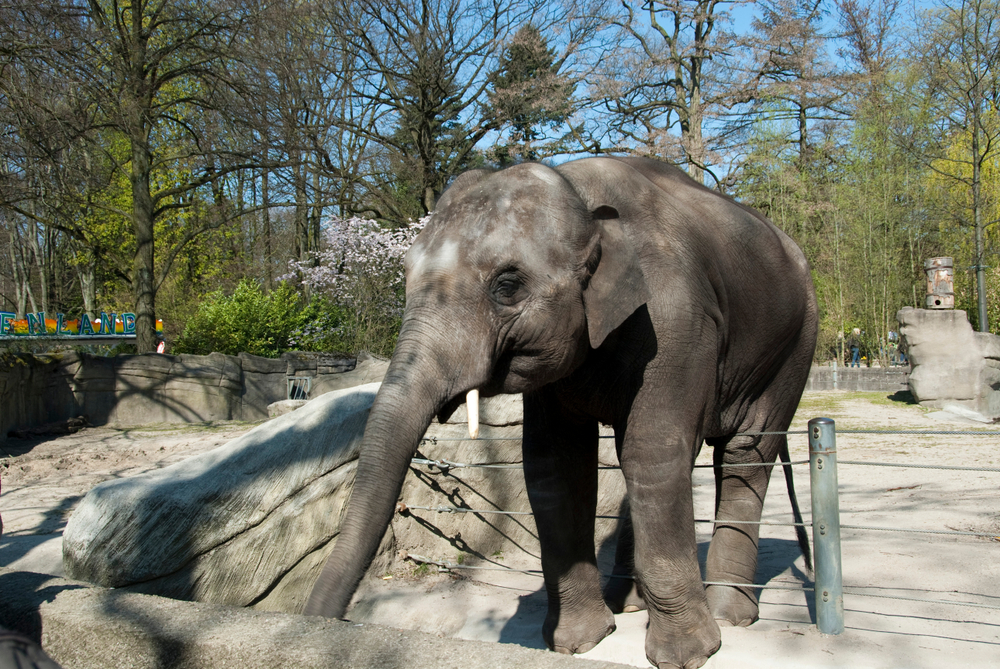 The many heartbreaking ways zoos are causing more harm than good for elephants has been exposed yet again by In Defense of Animals, which recently released its annual list of the 10 Worst Zoos for Elephants in North America.

“Our 2019 list of the 10 Worst Zoos for Elephants exposes many tragic examples of how elephants suffered in U.S. and Canadian zoos,” said Marilyn Kroplick M.D., President of In Defense of Animals.

“The zoos featured on this year’s list demonstrate how public display facilities can cause elephant suffering, regardless of space, ‘enrichment’, or financial investment. We call on all zoos to stop the harmful domination of elephants.”

Just some of the problems exposed by In Defense of Animals include the use of bullhooks, reckless breeding, premature deaths, elephants suffering from chronic and deadly health issues caused by captivity and keeping incompatible elephants together, or even worse, isolating them completely.

Shockingly, many zoos also exploit elephants for entertainment, tear bonded animals apart, and keep them in inappropriate climates. All are kept in enclosures that inherently fail to meet elephants’ needs, and don’t come close to approximating their lives in the wild.

In zoos, elephants are tragically denied space to roam, to make meaningful choices about their own lives, to decide who their friends and mates will be, or to escape violent conflicts.

They’re simply denied everything they need to thrive, and no amount of improvement will ever make zoos suitable for these incredibly intelligent, social and far-ranging animals.

Some of the worst offenders in North America featured on this year’s list include:

Not only are the Pittsburgh Zoo’s substandard and dilapidated enclosures harmful for its imprisoned elephants, it continues to mislead visitors about its accreditation and refuses to follow a safer system for handling elephants. Beyond that still is the Zoo’s callous disregard for the social bonds elephants can form. It has separated elephants who have been together for decades and put them at risk of emotional and physical trauma.

Zoo Miami’s troubling death toll continues to raise concerns about its ability to keep elephants alive. Four have died in its care since 2012, and the Zoo continues to deny them the opportunity to escape conflict among each other. Tragically, one bullied elephant likely lost her life because of it in 2019.

The Bronx Zoo, operated by the Wildlife Conservation Society (WCS), continues to deny the physical and psychological needs of its two Asian elephants, Happy and Patty. Both are kept in isolation, in defiance of accepted standards designed to maintain the bare minimum of captive elephant welfare, and are forced to spend much time indoors because of the Zoo’s inappropriate climate.

The Oregon Zoo’s selfish desire to produce another crowd-pleasing calf put one of its elephants at serious risk. Despite having been exposed to tuberculosis (TB), the Zoo bred Asian elephant Chendra anyway. She was later diagnosed with TB and suffered from a number of health issues. Heartbreakingly, she suffered a miscarriage all alone because she was quarantined from her companions for months.

After seven years of trying, the Louisville Zoo finally got African elephant Mikki to give birth, but only after repeatedly forcing her to endure multiple unnatural and invasive artificial insemination procedures, during which she was chained down. Sadly, her calf will never know what it’s like to live in a herd, as the Zoo continues to house both him and his mother with an Asian elephant, which is unsuitable for all of them.

The Natural Bridge Zoo remains proud of the fact that it’s one of the only zoos in the U.S. to allow elephant rides; most have ended the practice because it’s unsafe for elephants and members of the public. Tragically, the Zoo’s lone elephant Asha has been isolated there for almost two decades, and continues to be forced to give thousands of rides while under the threat of being beaten or stabbed with a bullhook.

The Edmonton Valley Zoo has continued to come under fire for dooming Asian elephant Lucy to die in a frigid prison. Lucy’s health has declined over the years, yet she’s forced to continue to endure Canada’s freezing winters, where she spends most of her time confined to a small barn, all alone.

The Hogle Zoo has kept African elephants Christie and her daughter Zuri in a barren exhibit alone since 2015, which is one of the worst cruelties for this social species. The pair are also forced to spend much of their time indoors to get through Utah’s freezing winters, while the Zoo continues to fail to recognize their most basic needs.

San Diego Zoo Global, which operates the San Diego Zoo and San Diego Safari Park, continues to operate irresponsibly as an elephant factory. Sadly, it produces numerous calves without the space or social structures to support them, and separates young elephants from the only families they’ve ever known.

The Rosamond Gifford Zoo recently publicly celebrated the birth of a new calf, but failed to acknowledge the legacy of family tragedies it has caused. Among a miscarriage, death and separating elephants to ship them around to other facilities, this Zoo disregards the most basic needs of its elephants and treats them like commodities.

While the Roger Williams Park Zoo did announce it would stop using bullhooks after being featured on last year’s list, it still has a lot of problems. This Zoo continues to miseducate the public with information about elephants, their habitats, and their behavior that is false, unscientific and self-serving.

Fortunately, as people become increasingly aware about the heartbreaking ways captivity harms elephants, and how zoos are misleading the public about captivity, the list of zoos closing their elephant exhibits is growing. Elephant advocates like In Defense of Animals are working to encourage yet more zoos to release their captive elephants to sanctuaries, where they can live out their days in conditions that meet both their physical and psychological needs.

Since In Defense of Animals released the list and and accompanying video evidence, two of the worst-ranked zoos have already put plans to separate bonded elephants on hold. Still, more public pressure is needed to help keep positive changes coming for elephants who are still waiting. We know too much about what elephants need to allow their suffering to continue in zoos.

For 16 years, the 10 Worst Zoos list has highlighted some of the worst zoos and exposed the senseless suffering of captive elephants across North America. Reading and sharing the list helps raise even more awareness about the problems that are inherent with captivity and the harm it causes—all without any benefit to individual elephants, or to them as a species. Ultimately, captivity kills. Every zoo must phase out their elephant exhibits and focus on truly protecting elephants… in the wild, where they belong.

You can help by signing and sharing In Defense of Animals’ petition calling on the Pittsburgh Zoo to permanently halt its cruel plans to separate bonded elephants Seeni and Sukiri, who have been together for more than two decades.

This article was first published by OneGreenPlanet on 16 March 2020. Lead Image Source : karegg/Shutterstock