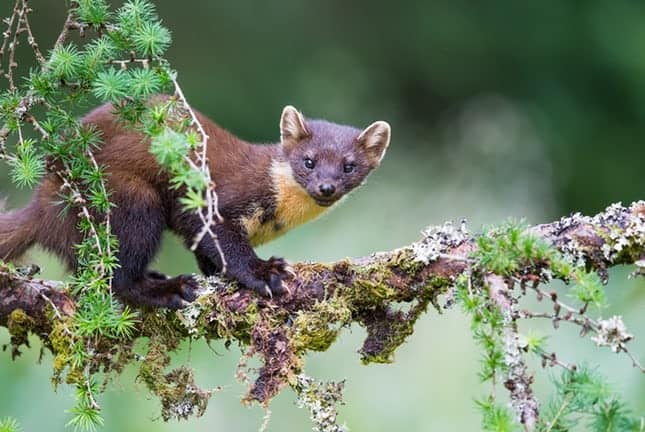 The pine marten, a fearsome but diminutive predator driven to extinction in England, has returned to the country’s largest forest for the first time since 1926.

Stills and video from a camera trap have recorded a mature pine marten devouring peanut butter put out for red squirrels at a secret location in Kielder forest, Northumberland.

It is the most conclusive evidence of a resident pine marten population in Northumberland and confirms the resurgence of a once-persecuted and still vanishingly rare mammal. A pine marten was spotted in Shropshire three years ago and there have been sightings in the New Forest. Next year, the pine marten will be reintroduced into the Forest of Dean, and a programme to boost numbers in Wales is going well.

The images were obtained by John Hartshorne, who volunteers to monitor red squirrel populations as part of an effort to stop their decline following the incursion of grey squirrels.

Hartshorne said: “I was getting loads of great shots of red squirrels and then thought, ‘Oooh, what was that?’ I zoomed in and for a moment or two I thought a badger had got up to the baited feeder but focusing in it was incontrovertibly a pine marten, which is superb.

“We know that there are pine marten around in Northumberland from anecdote but we’ve been waiting for a clear picture of evidence that they are here.”

The fact that the same individual was filmed on separate occasions suggests it could be a resident animal, said Hartshorne, and was therefore likely to have “colleagues” – or possibly a mate – in the area.

The pine marten was found in woodland owned by the Forestry Commission and their ecologist, Tom Dearnley, said: “Pine marten returning to England, over the Scottish border, have been anticipated for some time, encouraged by the efforts we are making to create ecologically diverse forests. We are delighted to see photographic evidence of their return, in a forest valued by so many people.”

For decades, the pine marten was killed by gamekeepers protecting their gamebirds but conservationists seeking to save the red squirrel are particularly keen to see the pine marten return because of evidence they predate grey squirrels and create a “landscape of fear” for them.

Simon O’Hare, project manager for Red Squirrels Northern England at Northumberland Wildlife Trust, said: “It is well documented that grey squirrels out-compete red squirrels for food and also pass on a deadly virus, squirrel pox, to reds: this is one of the main reasons that the species in under threat. The natural return of pine martens in areas of northern England is an exciting prospect, as it could have a knock on effect by suppressing grey numbers, allowing native red squirrels to prosper once again in our woodlands.”

The pine marten is one of the rare species being targeted by the Back from the Brink project as a range of different conservation groups seek to re-establish a colony in Northumberland.

This article was first published by The Guardian on 15 Aug 2018.