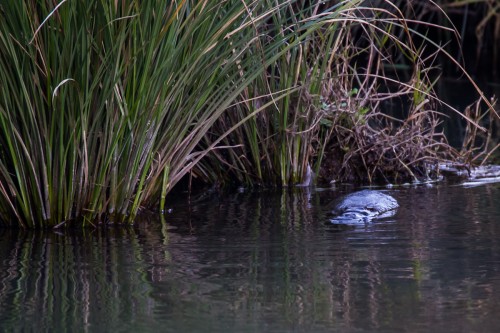 Early one morning during my Australian trip I headed out along the Condamine River to a quiet spot that I had noticed on a previous excursion.

Here the river widened around a bend, forming a slow-flowing, lagoon-like stretch of water that had reeds and grasses along its edges.

When I first saw this part of the river, I immediately thought it might be a good spot to look for the shy and secretive Platypus – a species that I had not observed before in the wild.

The Platypus is a unique creature, and one of only five monotremes – mammals that lay eggs rather than giving birth to live offspring.

It is also unique in that it is the only venomous mammal, with the male having spurs on its hind feet that can administer a very nasty dose of toxin that is very painful even to humans.

This creature is additionally semi-aquatic, and its combination of duck-bill, paddle-tail and webbed feet make it one of the most unusual animals on the planet.

Notoriously shy, the Platypus is usually never seen by people even though it may be quite common in suitable habitat within its range. It is normally active at dawn and dusk, or nocturnally or on overcast days.

However, during the cold winter months they need to feed all day to get the energy intake they require to maintain their body temperature (even though it is lower than most mammals in cold conditions, with the Platypus being endothermic), so this is the best time to try and locate and photograph them.

Even so, their habitat is usually well shaded and they are almost always in motion, so taking any kind of acceptable image of a Platypus is very rewarding as slow shutter speeds and high ISOs create very limiting parameters.

And I had to hand-hold the camera as I didn’t bring my tripod with me on this trip!

This particular morning was fine but foggy and frosty. Despite the murkiness, soon after quietly approaching the river I spotted one Platypus floating on the water surface directly beneath where I was standing on the bank!

It was as surprised as I was, but didn’t panic – it just slowly submerged and swam underwater toward the opposite bank. So I waited patiently and after about 10 minutes it reappeared on the surface not too far away and I was able to take some images as the sunlight began to penetrate the mist.

I noticed its mate feeding further upstream, so after taking my photos I just sat there watching the pair for an hour or so as they went about their early morning breakfast activities. It was quite a privilege to observe them alone at such close range and in a magnificent setting – definitely one of the highlights of this trip!

What a nice experience with this elusive critter. I would love to see and photograph one of these. Just one more reason to visit Australia someday.