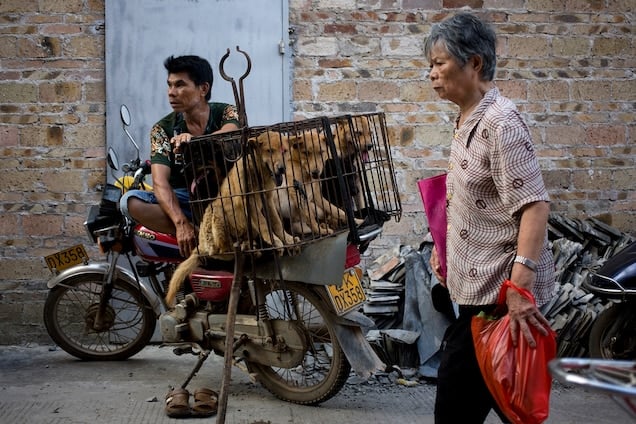 Although dogs have been eaten in parts of East Asia for hundreds—and possibly thousands—of years, a relatively new festival in Yulin, China, has sparked global controversy and polarized many Chinese, over both the treatment of the animals and the practice of eating them.

The ten-day Lychee and Dog Meat Festival started in Yulin, in southern China, on June 21. The annual festival, timed to the summer solstice, has been held for the past decade.

About 10,000 dogs are likely to be slaughtered over the course of the festival, many of them served in hotpots.

The festival, while organized by private citizens and businesses, is not officially endorsed by the Chinese government, at either the local or national level. Local support is mixed, with some enthusiastically welcoming visitors from out of town and others complaining that it gives their area a bad name. Online petitions have recorded millions of signatures condemning the event.

Watch: Dogs are rescued from the meat trade in South Korea. The same group, Humane Society International, is rescuing dogs this week from the Yulin festival in China.

“It’s embarrassing to us that the world wrongly believes that the brutally cruel Yulin festival is part of Chinese culture,” said Qin Xiaona, director of the Capital Animal Welfare Association charity, which sponsored the poll. “It isn’t.”

In response to protests, security has been increased in Yulin. On Chinese social media, the festival has become a hot-button issue. Some users decry the event while others defend the custom of eating dogs, saying it’s no different than consuming pigs or other animals.

In the U.S., Congressman Alcee L. Hastings (D-FL) has introduced a resolution that condemns the festival and calls on China to end the dog meat trade. More than 10 million dogs are killed for human consumption every year in China, the congressman notes.

“The trade involves animal cruelty, criminal activity including theft of pets, and serious risk to human health, with the World Health Organization linking the trade to cholera and rabies,” the congressman writes in a press release.

The resolution is supported by the Humane Society International, which criticizes the Yulin festival for what it calls cruel treatment of the dogs, including crowding and lack of food and water. The group also alleges that some of the dogs are beaten to death and even cooked alive, sometimes in front of guests.

The festival organizers dispute those claims, arguing that the dogs are killed humanely. In response to criticism, they have also said the dogs won’t be killed in public any more.

The Humane Society International has been working to remove dozens of dogs from the festival and find them adoptive homes, sometimes in the U.S. (which the group says raises awareness). Some of the dogs may be stolen pets and others are likely strays, the group alleges.

The Humane Society has done similar rescue work in South Korea, where it has also helped dog breeders transition away from the meat industry to other lines of work.

“The inhumane slaughter of thousands of dogs in China during the summer solstice, and millions more every year, deserves international attention,” said Hastings in a statement.

This article was first published by National Geographic on 21 Jun 2016. Lead Image: These dogs are for sale at the Yulin dog meat festival in southern China this week. Photograph by Andy Wong, Associated Press.

We invite you to share your opinion whether China’s dog meat festival should be banned? Please vote and leave your comments at the bottom of this page:

In the event that you voted to ban China’s dog meat festival please sign the petition: