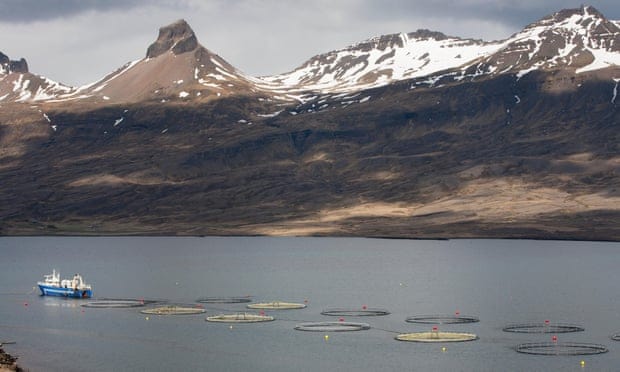 A five-fold expansion in open net fish farms that scientists believe could decimate Iceland’s wild salmon stocks is pitting Big Aquaculture against ecologists in the country.

Next month, a parliamentary bill is expected to extend farm licenses from 10 to 16 years, while omitting critics from oversight panels and handing primary monitoring powers to industry.

Jon Kaldal of the Icelandic Wildlife Fund said: “We are at a crossroads. If industrial-scale open net salmon farming is allowed to take over, it will cause massive pollution and a dramatic increase in the risk of farmed fish escaping. Iceland is the final frontier for north Atlantic salmon.”

It is also a new horizon for a multi-billion euro Norwegian industry that campaigners say has halved its own wild salmon population and steam-rollered opposition.

But scientists say that they are under pressure from the industry to play down their findings. The Guardian has seen evidence of targeted pressure against Icelandic environmental scientists, although a fear of reprisal prevents many from speaking out. One scientist said: “I felt that I had to be careful because everything I said would be scrutinised for its potential to benefit industry.”

A leap in annual salmon volumes from 13,000 to 71,000 tonnes has already been agreed, with hundreds of new jobs likely to follow in the country’s deprived Westfjords region. Industry leaders see this as just the “early phase” of a rapid expansion that could take the country’s salmon production as high as 200,000 tonnes a year.

Kjartan Olafsson, the CEO of Arnarlax, Iceland’s largest salmon farming company, said: “The new parliamentary bill is an important step to get the industry growing. We have a long way to go to get to 70,000 tonnes – probably between five to 10 years. I think that the bill is a careful but smart first step.”

Last year, Arnarlax lost 200,000 salmon at its Laugardalur pen, when the fish had to be moved in icy waters after an outbreak of bacterial kidney disease (BKD). In January, a tear was reported at a pen containing 157,000 salmon.

Olafsson blamed the tear on a storm and described the BKD outbreak as “a national plague in Iceland” unrelated to open net farms. These are “the best available techniques in the world today,” he claims.

But Norway has been putting the brakes on expansion. Salmar bought a majority stake in the Icelandic company after Norwegian authorities began declaring a halt to new licenses for open net farms, after native wild salmon stocks fell by 50% in two decades.

An estimated 200,000 salmon escape from Norway’s farms every year and studies suggest that 71% of the country’s rivers have now been “genetically polluted” by these farmed escapees.

Iceland’s Marine Research Institute projects that for every tonne of farmed fish, one will escape, meaning that an extra 7,000 Norwegian escapees each year could soon mix with Iceland’s population of 80,000 wild salmon.

A government scientist, speaking on condition of anonymity, said: “In a worst case scenario, we will see a lot of genetic integration in small populations that are common in the Westfjords. It could lead to a population collapse.

“You could also get a hybridisation cascade coming out of this area and there would be nothing you could do about it. Iceland’s salmon populations come from a specific evolutionary line and we are putting this biodiversity at risk when we introduce farmed genes.”

Last month, Iceland’s fishing minister Kristján Þór Júlíusson called for dialogue after “too much anger and tribulation” in a national debate that Elvar Fridriksson of the North Atlantic Salmon Fund acknowledged was sometimes “full of hatred” on social media.

“Unfortunately, the voices that have been loudest until now have been the people fighting for what makes them a lot of money,” Fridriksson said. But the plans were “a great threat” to Iceland’s fragile ecology and small salmon population, he argued.

A keen angler himself, “people here devote their lives to salmon,” he added. “They’re the king of fish.”

In Borgarnes, Guðrún Sigurjónsdóttir, a farmer for three generations, said that escaped rainbow trout from fish farms upstream had already been found in the Nordura river, which she partly owns.

Apart from a dairy farm, Sigurjónsdóttir’s livelihood depends on licensing fees to wild salmon fishermen – which seasonally reach €1000 a day – and that depends on wild salmon.

“Money from fishing is one of the supports for our livelihood,” she said. “If it hadn’t been for the river, the farm would have gone bankrupt.

“My main worry now is genetic pollution,” she said. “It seems those fish are now being caught everywhere, all over Iceland. What will happen if this salmon is caught here in Nordura?”

Local fly fishers say they can identify the river a salmon has come from by its features. In a carnival of biodiversity, each river has its own small population. Eidur denied that any invasive salmon species had yet been caught in the Nordura but believes it is only a matter of time.

Sea lice are also a problem – parasites that gnaw on the mucous and flesh of fish, before moving on to their muscle and fat, weakening their hosts and making them vulnerable to other infections and early death.

Crammed open net farms are an ideal environment for their spread and scientists say that industry attempts to kill them with chemicals such as iflubenzuron, teflubenzuron and emamectin benzoate can pollute pristine waters, damaging prawns and other sea life.

Sea lice are emerging that are immune to pesticides raising the spectre of a chemical arms race against the pestilence. An Icelandic environmental scientist said: “We received scientific advice that we could use the chemicals here for five years and then we would get strains that were immune to the chemicals.”

Adding to the ecological toll on the oceans is the sewage created by immense volumes of fish crowded into pens. A medium-sized fish farm of just over 3,000 tonnes can produce as much effluent as a city of 50,000 people, according to the Norwegian Pollution Control Authority, and eutrophication problems may follow.

The environmental backlash has spurred a new film and campaign led by the outdoor clothing firm Patagonia.

Futuristic egg-shaped closed containment farms at sea or tanks on land avoid the risks of genetic dilution and pollution and contain the threat of sea lice infestation.

Oli Bjorn, an MP with Iceland’s governing Independence party says he: “would like to see more emphasis on building economic incentives for fish farming in closed circle pens.”

Despite their higher cost, environmentalists see closed pens as the future for the industry and point to surveys showing that consumers will pay more for sustainably farmed fish. Around half of the cost for closed container farms comes from license fees – which Iceland is considering reducing – but which campaigners want waived altogether to boost the fledgling technology.

Such a move is likely to raise the potential costs to Iceland’s ecology, and self-image.

As Bjorn put it: “We are a nation of fishermen and our general feeling is that we have to take care of nature. When you sit on the bank of a river and watch salmon try to swim upstream through the waterfalls, there is nothing in the world like it. Nothing.”

This article was first published by The Guardian on 19 Apr 2019.

We invite you to share your opinion whether fish farming should be forced to use closed pens to protect wild fish? Please vote and leave your comments at the bottom of this page.

WHY would anyone need to farm fish in Iceland? Sea lice, pen collapse (happened in the San Juan Island, WA, USA) and thousands of fish escape into the wild…and with Iceland’s weather??

FIsh farms must be permanently banned !!!

No! Fish Pens//Farming should be Permanently Banned!

No!!! Everyone knows that closed pens makes fish sick and the have to give them antibiotics because they are caught in their own feces, etc. NO!!!