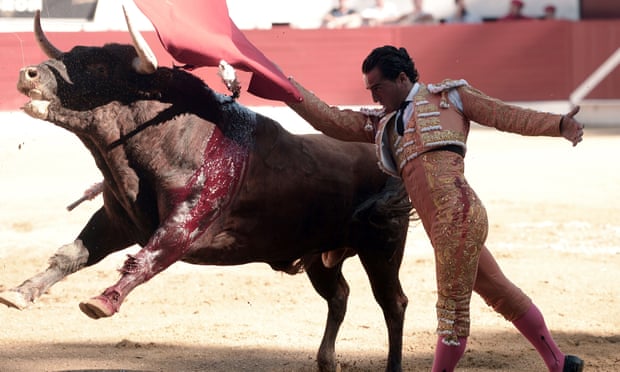 A Spanish bullfighter died after he tripped in the ring and was gored by the bull in south-western France, according to media reports.

Fandino stumbled during a fight in Aire-sur-l’Adour on Saturday after he tripped on a cape used in a turn to engage and distract the specially bred fighting bull. The animal then pierced the matador’s torso with its horns, EFE said.

He is the second Spanish bullfighter to die in the ring in the past year. Victor Barrio was killed after being gored by a bull in front of spectators last July, the first time since the early 1990s a professional matador had died in the ring in Spain.

Every year several people die in Spanish summer festivals involving bulls running through towns or being chased in the countryside, which often attract tourists.

This article was first published by The Guardian on 17 Jun 2017.

We invite you to share your opinion whether the cruel sport of bullfighting should be banned? Please vote and leave your comments at the bottom of this page.

Why this barbaric ???game/sadistic entertainment is still not banned?

BAN THIS BARBARIC CRUELTY TO ALL ANIMALS ALL OVER THE WORLD, HAVE YOU NO COMPASSION FOR ANIMAL LIFE, .? ANIMALS SHOULD NOT BE TORTURED AND KILLED, ! STOP NOW, WHERE IS MAN,????? I SEE EVIL MONSTERS WHERE MAN SHOULD BE,!!!!!

all this while when the bulls were killed, no one bothered. now that a matador is killed, there is a poll. any activity that involves hurting an animal is sick, sick, sick

You need to ask?

Amazing how it is perceived a horror when a man kills a bull and not when a bull kills a man! Strange thing about people … it is always how and what they believe to be acceptable. Bull fighting is savage, brutal, horrific, cruel and abhorrent! Horses and other animals are also exposed to this savagery! When will this be found to be unacceptable and banned? Surely we are informed and educated and know this to be desperately wrong!

Each and everywhere wildlife disturb or destroy

There are way too many evil people in the world. I can not believe that the governments, the leaders of the world, the legal system continue to let this happen. We need leaders that are ethical, strong, people with great hearts and souls. STOP BULLFIGHTING WORLDWIDE. Knuckledraggers and all the evil POS that take pleasure out of watching a trapped animal with zero chance of coming out of it alive and they must know that. They must feel that. It’s horrific evil that has to stop. END ANIMAL ABUSE WORLDWIDE.

DO NOT CALL IT SPORT. IT IS JUST CRUEL SENSELESS CRIMINAL ACT. HOW CAN SOMETHING LIKE THAT STILL BE TOLERATED IT THIS CENTURY AND IN EUROPE?

This is barbaric and should be banned these beautiful bulls are tormented for other people pleasure its disgusting.

Torturing Bulls to death is barbaric, sadistic and atrocious. Anyone that finds this entertaining should be considered mentally unstable.

Bull fighting should definitely be banned

cruel not even a true sport needs to end. Just barbaric

tradition is NEVER AN EXCUSE for such mind-bending cruelty, period! i feel kind of sorry for the males in your society, since apparently in order to “feel like a man” they have to feel they’re dominating another living, feeling being…kinda makes me wonder how they interact w/the women as well… perhaps your country should require psychological help for these pitiful humans!

YES. This bull was subsequently hanged in public according to tradition. http://nordpresse.be/as-tradition-calls-it-the-bull-that-killed-the-spanish-bullfighter-was-hanged-in-public/

Ban bull fighting. In this 21st century it is outrageous it has not been banned a long time ago already.

Yes – murdering an animal for show is blood lust insane!!!!

It’s not a sport. It’s an egoistic practice by mostly males that deals in torturing a bull to death.

Of course, this is a cruel sport.. Man created this culture or tradition, not God!!… There is no reason for this in the first place.

Just so you are aware. Using a word like cruel in the question regarding banning bullfighting looks biased and can bias the question. Especially when there is no need to add bias. Nuetral questions actually add validitiy to any argument you are trying to present using polls. There are some great articles explaining how surveys, polls, questionaires,etc should ask/phrase quesitons.

as human beings are the only animal who kills for fun – should humans then be banned???

YES! ban all abuse of animals!

yes it should but i won’t hold my breath. this is an extremely cruel world and Spain is at the top of the list.

Yes. This bull was subsequently hanged in public according to ‘tradition’.

This barbaric “entertainment” is one of the most despicable, twisted and disgusting things humans ever though up!! ANYONE who supports this in any way deserves to be gored right up the ass!! It absolutely makes me sick~ what animals have to endure because of sick humans!!!!!!!!!!!!