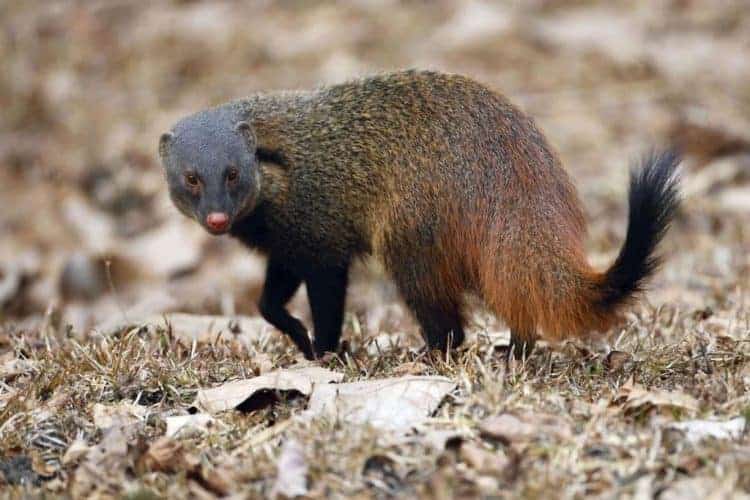 The fearsome mongoose. It can fight a cobra, kill a snake with one bite, and keep a farmer’s field clear of mice, rats, and insects.

But to some in India, which is home to six species of the ferret-like animal, they’re valuable in another way. Their fur makes expensive—and illegal—paintbrushes for artists.

As long ago as 1972, India prohibited the hunting, selling, and buying of mongooses and mongoose parts, including their hair, because of overhunting for their fur. Yet the poaching and the black market continue to this day. As recently as August, Indian officials arrested people suspected of smuggling 12 pounds of mongoose hair, the equivalent of more than 130 animals, the New Indian Express reported.

In the early 2000s some 50,000 mongooses—the most recent data available, according to the nonprofit Wildlife Trust of India—were being killed annually. Although we don’t know how many are killed today, experts say the black market continues to thrive.

“The production of mongoose-hair brushes is still ongoing,” says Jose Louies, of the Wildlife Trust of India. “The domestic trade is down, but the international trade is what drives the trade. Mongoose brushes are considered as fine brushes by artists across the world.”

These brushes are sometimes sold directly to buyers in the United States, Europe, and the Middle East, and sometimes they’re passed off as sable or badger paintbrushes, which are legal.

Hunting can be brutal business. Indigenous hunters typically trap mongooses using snares or nets and then beat them to death with clubs, according to a documentary the Wildlife Trust of India produced. Hunters pull the fur off the skin, keeping the meat for themselves and selling the hair to middlemen. One mongoose provides a small handful of hair. The middlemen consolidate hair from many villages and sell it to factories to produce paintbrushes.

It can be a large-scale operation. In 2015, Indian law enforcement seized 14,000 mongoose-hair paintbrushes from a distributor in a coastal town of southwestern India, the Times of India reported. They’d been manufactured in the state of Uttar Pradesh, in an area the Wildlife Trust of India has said is home to many brush manufacturers.

“There is little knowledge among the artists or the buyers about this cruel and illegal practice,” says Shekhar Kumar Niraj, the head of the Indian office of TRAFFIC, the wildlife trade monitoring organization. Those who knowingly seek out mongoose-hair brushes tend to be professional oil painters, says Richard Llewellyn of ColArt, the English company that owns the Winsor and Newton art materials brand, which does not sell mongoose-hair brushes.

Mongooses are protected in India under the Wildlife Protection Act of 1972, which sets a three-year minimum sentence and a fine of 10,000 rupees (U.S. $146) for anyone convicted of killing, possessing, or trading a mongoose or its parts. There’s also effectively a ban on the international trade of Indian mongooses and their hair under the Convention on International Trade in Endangered Species of Wild Fauna and Flora (CITES), a global treaty that regulates the cross-border wildlife trade.

The illicit trade in mongoose hair is also an issue with which U.S. law enforcement is concerned. “The [U.S. Fish and Wildlife] Service takes illegal trade in wildlife very seriously and is aware of the [mongoose hair] issue,” said a spokesperson in an email.

What’s in a Brush?

Artists use different brushes for different purposes. Hog bristle, for example, is stiff, so it’s good for spreading thick oil paint around. Kolinsky sable, which is actually from a type of mink, is very soft, so it’s used for watercolor painting or glazing. Mongoose falls somewhere in the middle, says Mark Aronson, the chief conservator at the Yale Center for British Art. The hairs are a medium thickness, come to a nice point, and are stiff enough to paint fine details, he says.

Still, the availability of alternatives has not stamped out the trade in mongoose-hair brushes.

“Sometimes it is cheaper for the traders to source raw materials illegally from the wild than to invest in the alternative,” says Niraj. And sometimes consumers don’t know any better, or don’t care.

Llewellyn says ColArt hasn’t sold mongoose brushes for at least 30 years because of India’s conservation laws. And Blick Art Materials, owner of the Dick Blick art stores in the U.S., made a conscious decision to stop selling mongoose-hair brushes several years ago for the same reason.

“It was considered an endangered species, and we don’t support that kind of harvesting of animal hairs,” says Nancy Hansel, the vice president of merchandising at Blick.

This article was first published by National Geographic on 15 Dec 2016.

We invite you to share your opinion whether the illicit trade in mongoose hair should be strictly enforced? Please vote and leave your comments at the bottom of this page.