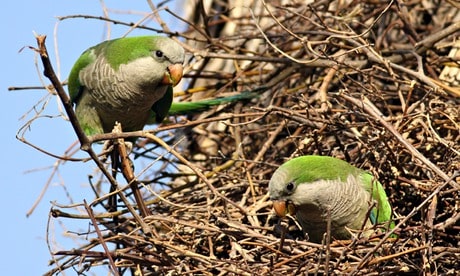 It has taken nets propelled by bungee cords, egg stealing and £260,000, but the days of the monk parakeet in the UK are now numbered. A programme to eradicate the colourful but non-native bird that started in 2011 has brought the population down to the last 50 birds, according to the latest government estimate.

How the birds arrived from the tropical forests of Brazil and Bolivia is not known for sure, but as popular cage birds it is likely the colonies started with birds escaping from captivity. Locals on London’s Isle of Dogs, the monk parakeets’ UK heartland, have welcomed the exotic addition to their streets. But the Department for Environment, Food and Rural Affairs (Defra) concluded eradication was necessary after considering the damage caused by the feral birds in other countries and had to be carried out before the population got out of control.

The key problem is the huge communal nests built by the monk parakeets as these can cause blackouts when built on pylons and then drenched by rain. The US has already spent millions of dollars removing nests for this reason. The nests have also been linked to fires.

In the UK, Defra has revealed in response to a Freedom of Information request that the monk parakeets have already made a home in a mobile phone mast and that “they are causing a hazard to householders due to the droppings below their colonial nests”.

Since 2011, 62 birds have been captured by hand, tempted into cages or snared by “whoosh netting”, a bungee-powered net that launches from the ground over a target. A further 21 nests and 212 eggs have been taken. Most of the birds caught are then kept captive, but about 30% could not be re-homed and were put down.

“Monk parakeets can pose a threat to national infrastructure, such as pylons and substations, crops and native British wildlife,” said a Defra spokeswoman. “That is why work is being carried out to remove them in the most humane method appropriate.” She said the £260,000 cost was considerably less than having to tackle a large established population and the damage it would cause.

The RSPB has not objected to the cull, although it does not believe the monk parakeet poses a threat to indigenous wildlife. Instead, its spokesman Grahame Madge accepts removing the currently small population is prudent. “The warming climate means it could grow into a big problem in the future. In southern Spain, for example, there are monk parakeets everywhere,” he said. “And once the genie is out of the bottle, there’s little you can do.”

But while the monk parakeet is on the way out, the ring-necked parakeet is here to stay. There are now estimated to be about 8,600 breeding pairs of the bright-green birds, widely distributed across the whole of the country. “It is no longer cost-effective or viable to eradicate this species, which means that we now must bear the on-going environmental, economic and social impacts from these birds,” said the Defra spokeswoman. “This is why it is vital that we take action against invasive non-native species such as the monk parakeet before they become more widely established.”

The origin of the UK’s ring-necked parakeets is also a mystery, although there are suggestions they were first released during the filming of the film African Queen at Shepperton studios, or set free by Jimi Hendrix in Carnaby Street, London. However they arrived, in the eyes of the London Wildlife Trust, they are now “as British as curry”.

We invite you to vote whether the Monk Parakeet should be eradicated in the UK? Please vote and also leave your comments at the bottom of this page.

This article was first published by The Guardian on 24 Sep 2014.