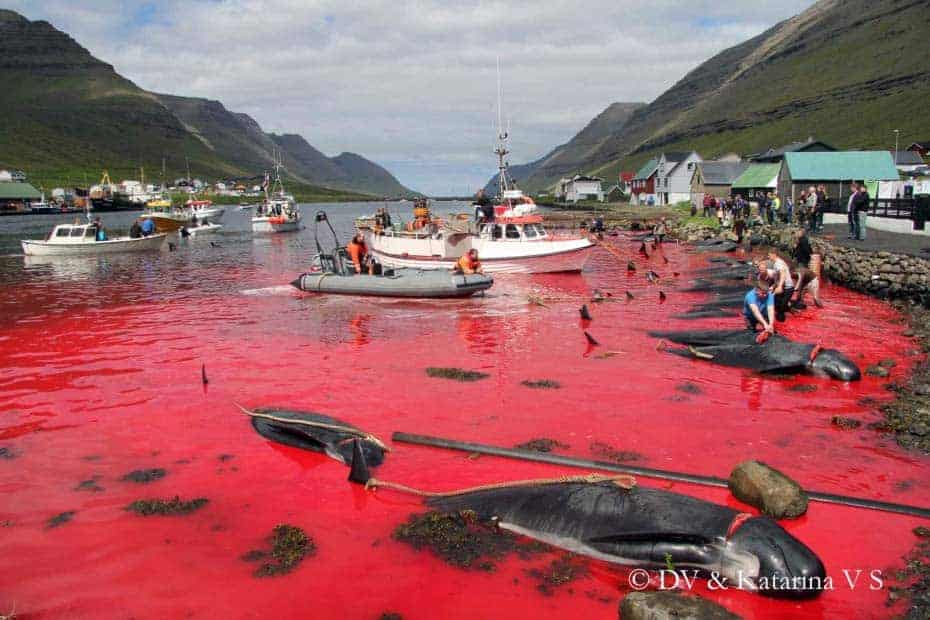 Last week a pod of 30-50 pilot whales was slaughtered in the first grindadráp (grind) of the year, on the island of Viðoy in the Danish Faroe Islands archipelago.

The ordeal began this morning when locals spotted a pod of between 100-150 pilot whales passing by Svínoy.

Several boats then drove the pod of whales approximately 11 kilometres to Hvannasund, where the whales were forced to beach, and slaughtered by locals.

Faroese media outlets have confirmed between 30-50 pilot whales have been killed.

“Is it exactly these kinds of atrocities that authorities in Denmark and the Faroe Islands are attempting to cover-up, by refusing Sea Shepherd crews entry to the archipelago,” said Sea Shepherd Operation Bloody Fjords Campaign Leader, Geert Vons.

“And this is exactly the reason why we continue to push the increasing global momentum to end this bloody and brutal practice.”

In 2015, the international crew of the Sea Shepherd ship, Bob Barker, was unlawfully denied entry to the Faroe Islands by Denmark.

In 2016, a new law was passed in the Faroe Islands which requires that all Sea Shepherd volunteers must have a visa to enter the archipelago.

As a result, Sea Shepherd has modified its tactics in the battle against the grindadráp.

The organisation’s 2016 Pilot Whale Defense Campaign, Operation Bloody Fjords, sees Sea Shepherd take its battle against the grindadráp to the heart of the Faroese and Danish institutions that continue to promote this outdated practice.

This article was first published by Seashepherd.org on 06 Jul 2016.

We invite you to share your opinion whether the slaughter of pilot whales in the Faroes should be stopped? Please vote and leave your comments at the bottom of this page:

In the event that you voted to stop the whale slaughter in the Faroes, please sign the petitions:

Stop the Bloody Whale Slaughter on the Faroe Islands