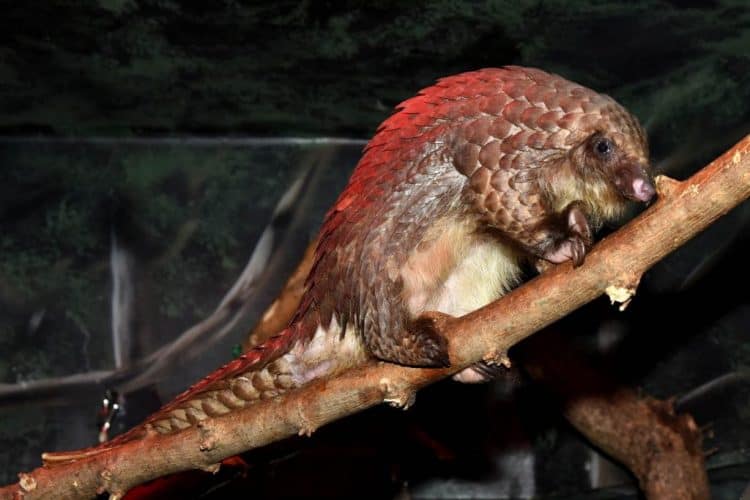 If during the past decade you’d wanted to see a scaly creature about the size of a house cat with a long skinny tongue for slurping up ants, California’s San Diego Zoo was the place to go in the U.S. Baba the pangolin arrived there in 2007 after wildlife officials intercepted him in an illegal shipment.

He survived in the zoo until last year, when he died after keepers noticed he was behaving abnormally, according to the San Diego Tribune. As it turns out, pangolins are hard to raise in captivity and often die prematurely.

Nevertheless, that hasn’t deterred six U.S. zoos and one nonprofit organization, Florida-based Pangolin Conservation, from quietly bringing in about 45 pangolins of their own from Africa during the past year. The institutions say they’re doing this to help save pangolins, which are doing very badly in the wild, and in the process they’ve ignited a debate over the role of zoos in helping save highly threatened species.

“We thought we have an opportunity to do something to help, and so we wanted to take a step toward that,” says Bill Zeigler, senior vice president of animal programs for the Chicago Zoological Society, which runs the Brookfield Zoo, home now to four baby pangolins and nine adults. Only one of them is on display. “The exhibit isn’t going to drive revenue, greater numbers,” Zeigler says. “It was to take an opportunity to address to visitors what’s going on with pangolins.”

Here’s what’s going on with pangolins: All eight species—four in Africa and four in Asia—are now threatened with extinction. Pegged by wildlife experts as the most trafficked mammal on Earth, pangolins are hunted for bushmeat across their range and are poached to supply demand for their scales in Vietnam and China, where they’re used in traditional medicine. As recently as late May, customs officers in Hong Kong seized more than seven tons of pangolin scales from a shipping container that originated in Africa.

In addition to educating the public about the little known animals, the zoos want to discover more about pangolins through on-site research and by sponsoring field research in Africa. And they want to establish a self-sustaining population of genetically diverse pangolins for potential reintroduction into the wild.

“We didn’t want to get ourselves in a situation like the vaquita, where we don’t know anything about them,” says Lewis Greene, of Ohio’s Columbus Zoo, referring to a porpoise found in the waters between Baja California and mainland Mexico that gets tangled in nets used to illegally catch a valuable fish called the totoaba. There are now estimated to be only about 30 vaquitas left on Earth. “If we could learn about the pangolin, then when it came down to a crisis like the vaquita, we’ll have the knowledge to maintain an insurance population.”

But some conservationists and animal welfare organizations at the forefront of the fight to save pangolins don’t support the new breeding plan, arguing that the animals are uniquely unsuited to zoo life.

“When it comes to elephants and dolphins, you’ll encounter arguments about their welfare in zoos,” says Jeff Flocken, North America regional director for the International Fund for Animal Welfare. “In the case of pangolins it’s not just poor animal welfare—typically they die,” he says.

He adds: “There’s no reason to capture them out of the wild and move them to North America other than to expand collection for zoos.”

The average survival rate for pangolins in captivity is less than five years, according to a blog post by Elly Pepper of the Natural Resources Defense Council. Pangolins in the wild are believed to be able to live for decades, but their life span isn’t definitively known, says Lisa Hywood, founder of the Tikki Hywood Trust, a Zimbabwe-based conservation nonprofit that rescues, rehabilitates, and releases pangolins.

Hywood has been caring for the nocturnal animals since 1994 at her center, which she describes as a “semi-captive” environment where the animals forage for ants and live cage-free. She says the pangolin mortality rate at her facility is about 25 percent. “They get stressed easily, they’re very shy, they don’t like loud noises or bright lights,” she says.

Indeed two of the pangolins being brought to America didn’t survive the journey, and at least seven—two at Brookfield, three at Columbus Zoo, and two at Pittsburgh Zoo, in Pennsylvania—have died since they arrived, according to zoo employees. Memphis Zoo, in Tennessee, Pangolin Conservation, and Gladys Porter Zoo, in Brownsville, Texas, didn’t respond to requests for information about how many pangolins have died since they arrived.

On the flip side, about 10 pangolins collectively have been born. According to Zeigler, Brookfield’s pangolins are “doing good,” but “because very little is known about them, every day is a new day.” But Zeigler acknowledges that past efforts to keep pangolins alive at zoos and establish long-term breeding programs have largely failed.

That’s because the animals have been unhealthy on arrival, and fed the wrong food, says Justin Miller, founder of Pangolin Conservation and the man behind the plan to bring pangolins to the U.S. zoos.

Miller asserts that so far the effort has defied the odds: “[Critics] told us we couldn’t give them a diet to keep them alive, and we’ve done that. We were told we wouldn’t be able to breed them, and we did that.”

FROM WILD TO CAPTIVE

Miller hatched the zoo plan about five years ago, he says, when he noticed that the illegal African pangolin trade appeared to be booming. “If you went over to Africa to ask people about pangolins, the bushmeat hunters were selling it for like $15 on the roadside,” he explains. “Within a year the price skyrocketed to like $200. I then understood there’s a major issue that’s going to get very large.”

But when Miller tried to talk to people in the U.S. about pangolins, they stared at him blank-faced, he says. He realized that the public needed to learn about pangolins, so he spent three years on and off in Togo, in West Africa, convincing farmers to give up white-bellied tree pangolins they’d found—and planned to eat—in exchange for chickens (Miller says he didn’t pay for the pangolins and that the zoos paid only research and shipping costs). He nursed the pangolins back to health, reduced their stress levels, developed a diet that worked, and sent them to the U.S.

Miller argues that the end goal of conserving the animals justifies pangolin deaths in the short-term. He points to San Diego Zoo’s pivotal role in the comeback of the California condor as evidence that zoos can help save a species. Condors were extinct in the wild until 1992, when the first zoo-bred birds were releasedinto their native California habitat.

There are no immediate plans to reintroduce the pangolins into the wild, Miller says, but “the captive population is being managed in such a way that, if needed, it can be reintroduced.” Scientists are studying the pangolins’ genes so that the offspring can be as genetically diverse as possible.

But Lisa Hywood thinks that it would have been better to keep the animals in their own environment and focus instead on bolstering the capacity of rescue centers in Africa.

“All of a sudden their world has been turned upside down,” she says of the zoo pangolins. “What I would have liked to see, if unicorns existed outside my window, is that they would’ve been sent to the authorities and released into native, safe protection zones.”

She adds: “If we can’t stop the demand, though, it doesn’t matter how many zoos are breeding pangolins—we aren’t achieving very much.”

This article was first published by National Geographic on 14 Jun 2017.

We invite you to share your opinion whether the trafficking of Pangolins should be stopped? Please vote and leave your comments at the bottom of this page.