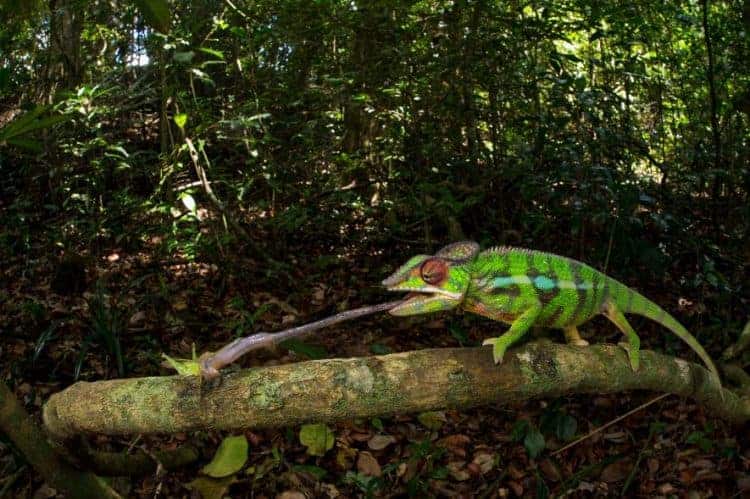 Armed with a flashlight on a backroad in Florida, Hillary Dupont-Joyce is on the hunt. Her target is a master of disguise, but a flash of light can make it stick out among the dark trees.

She scans her light along a thicket. Suddenly, her trained eye spots the prize: a sleeping chameleon.

Dupont-Joyce is part of a community of “herpers”—reptile enthusiasts who catch non-native chameleons in the backyards and bayous of rural Florida, often adopting them.

During the day, chameleons are near-impossible to see. They “don’t exactly match any given background like the old Looney Tunes bit,” says Montreat College herpetologist Joshua Holbrook, but their ability to change color and contort their bodies to hide behind branches and leaves make them seem invisible.

At night, they relax, turning a lighter, lime green and becoming more, well, chameleon-shaped. That’s when herpers go on the hunt.Herpers are a small but dedicated community who share herping tips and favorite chameleon hiding spots on private online forums. Even more underground—and sometimes controversial—are chameleon “ranchers,” who breed and raise the reptiles with the intention of selling them off.

Most of these ranching activities go unnoticed, since it’s hard to prove whether a chameleon rancher deliberately—and illegally—introduced the initial chameleons, or just happened to already have them on his or her property.

Ranching can be lucrative; a panther chameleon, one of the Florida non-natives, can sell for up to $1,000.

And it’s not hard to wrangle the small reptiles. They’re predictable homebodies—generally settling in one spot—as well as fecund: A chameleon pair in one small area can yield an entire micro-colony in just a few generations. Why import chameleons from a distant country like Yemen when you have an unlimited, free supply in your backyard?

At least three species of chameleons living in Florida were brought to the U.S. in the pet trade from Madagascar and the Middle East. (North America has no native chameleons.)

Because chameleons are non-native, it’s okay to pluck them from the trees—exotic species don’t have any protected status in Florida. Once a herper has snatched one, they can’t put it back, since it’s illegal to release exotics into the wild.

Chameleons seem to be less destructive than other exotic reptiles in Florida. These include the tegu and the Burmese python, which destroy native vegetation and wildlife, wreaking havoc on the ecosystem.

“Find a Burmese python, and you euthanize every one,” says Holbrook, who is also a herper.

Insect-eating chameleons, on the other hand, feed on agricultural pests, he says.

Their unassuming nature is also why chameleons are less of a priority for the Florida Fish and Wildlife Conservation Commission, which is more concerned with managing the state’s 63 other non-native reptile and amphibian species. Florida has more non-native reptiles than anywhere else in the world.

The commission did not respond to a request for comment about their stance on chameleon herping or ranching.

Neither Holbrook nor Dupont Joyce keep chameleons they catch, instead adopting them to fellow enthusiasts.

Dupont-Joyce is adamant that her wild-caught chameleons don’t end up in the area’s big box pet stores. “Since [such stores] came into play, there’s been a decline in proper husbandry,” she says.

Illegal buying, selling, and trading has also exploded on Craigslist, she says, where unlicensed sellers can do business largely unchecked.

Dupont-Joyce, who grew up around reptiles, has transformed her father’s exotic pet store in Palm Beach into an animal rescue, Wild Cargo Pets, where she takes in hundreds of unwanted pets every year.

In the last six months alone, she’s adopted out 362 animals. The majority of animals left on her doorstep are non-natives, such as lizards and chameleons.

“I think that’s one of the reasons why our pet store is a drop center for any unwanted animal,” she says.

Because they’re not even supposed to be in the state, “there’s not enough places with open arms, saying ‘bring them in.’”

This article was first published by National Geographic on 30 Jun 2017.

We invite you to share your opinion whether the trapping and “ranching” of chameleons should be banned?Please vote and leave your comments at the bottom of this page.

10 thoughts to “POLL: Should the trapping and “ranching” of chameleons be banned?”