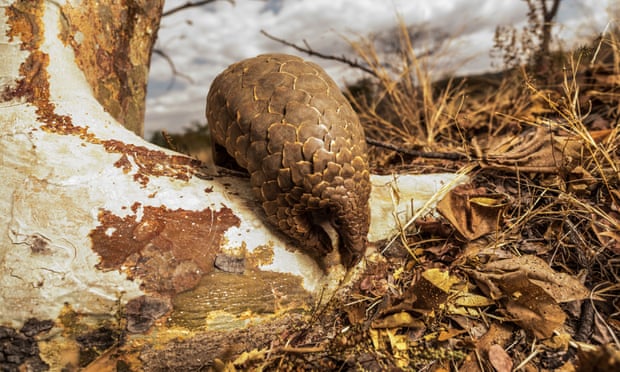 Pangolins have become the most trafficked mammal on earth, and a record-breaking discovery of their scales in Malaysia has raised more concerns about their future.

Pangolins, who live in Africa and Asia, are fascinating little creatures. They’re the only mammal on earth covered in true scales. Sadly, even though their scales are made of nothing more than keratin, they’re wrongly believed to have medicinal properties and the demand for them has put the future survival of pangolins in jeopardy.

Thanks to a tip, customs officials in Malaysia have just found a total of 18 sacks filled with 1,570 pounds worth of pangolin scales at the Kuala Lumpur airport cargo warehouse that were en route from locations in Africa.

Officials believe the scales came from as many as 1,400 pangolins, and that the shipment was worth more than $2 million. Although where they were headed is still being investigated because the final destinations listed were fake, officials said they typically end up in China and Vietnam.

Unfortunately, their scales aren’t the only thing making them a target. Their meat is also considered a delicacy in some places, and the demand for it is also driving their alarming decline.

According to the International Union for Conservation of Nature (IUCN) Species Survival Commission (SSC) Pangolin Specialist Group, more than one million pangolins are estimated to have been taken from the wild over the past decade alone, which has made them the most illegally traded wild mammal in the world. That breaks down to one pangolin being taken from the wild every five minutes.

While the latest discovery in Malaysia doesn’t bode well for their survival, conservationists aren’t giving up on them yet. Last year they were given the highest level of protection under the Convention on International Trade in Endangered Species of Wild Fauna and Flora (CITES), and their advocates in the U.S. are working to have them protected under the Endangered Species Act.

Even though it’s too late to help many who wind up in the hands of wildlife traffickers, in some cases they’re rescued while they’re still alive and have a chance to return to the wild. In April, more than 100 were confiscated in Vietnam and taken in by Save Vietnam’s Wildlife, which has already begun releasing them in groups.

Hopefully conservationists and enforcers will continue to crack down on poachers and reduce demand to ensure pangolins don’t go extinct.

We invite you to share your opinion whether there should be a crackdown on the trafficking of pangolins? Please vote and leave your comments at the bottom of this page.