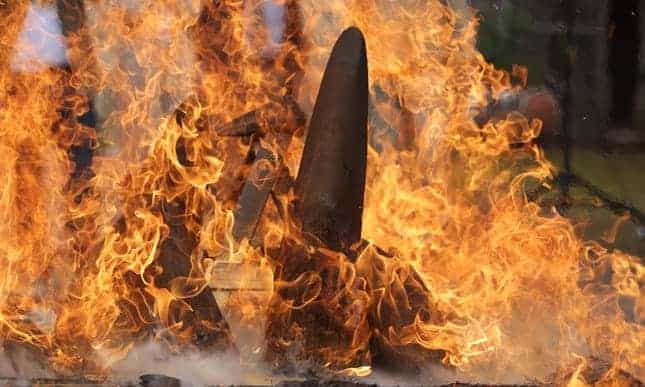 September 22 was World Rhino Day. Rhinos were once widespread across Asia and Africa and even in Europe, where they are depicted on cave paintings. Today their situation is precarious.

The world population of the northern white rhino now consists of three individuals. Sudan, the last surviving male, is now beyond breeding age. He and two female companions are living out their lonely final years under the care of Ol Pejeta Conservancy in Kenya.

Three of the remaining five species, the black rhino in Africa and the Javan and Sumatran rhinos in Asia, are listed as ‘Critically endangered’. What can be done to save them?

On Tuesday Richard Leakey and I were guests of the Dvur Kralove Zoo in the Czech Republic. Together with Veronika Varekova, a Czech supermodel who is also a Trustee of the African Wildlife Foundation, we were there to preside over the burning of horns from the zoo’s rhinos.

Earlier in the year, the zoo decided to remove the horns of all its 21 rhinos after a rhino in a French wildlife park was killed by poachers. The zoo knows that if it holds on to these horns it will itself become the target of organized crime.

At the start of the moving ceremony, the zoo Director Premysl Rabas explained:

If we do not fight the trade in rhino horn, the time will come soon when rhino completely disappears from our planet. By burning rhino horn we want to send the world a clear message that horns belong to rhinos and not to people.

This is the second rhino horn burn held by the zoo – the first was in 2014. The zoo is part of a growing global movement, one started by Richard Leakey and Kenya’s President Moi when they organized Kenya’s first ivory burn in 1989. The word’s first rhino horn burn took place, also in Kenya, the following year.

The event in Dvur Kralove highlighted the key role of zoos in rhino conservation. Since 2009, the Zoo has managed to return eight of its rhinos back to Africa, including the three Northern white rhinos in Ol Pejeta.

Sadly their efforts came too late to save this species, but zoos can help stop other species from suffering the same tragic fate. Breeding stocks of rhinos in zoos can form the basis for restocking programmes where there is suitable habitat and adequate security in place.

The rhino horn burn in Dvur Kralove is part of a wider campaign “Burn Horns, Save Rhinos”. The message is simple: the only way to safeguard the future of rhinos is to end the trade in rhino horn. In the words of Richard Leakey:

The slaughter of rhino is driven by trade in rhino horn. Burning it and ridiculing those who value it is an excellent idea. And those who try to sell it should be publicly condemned as they deliberately try to make personal profit on extinction of rhinos.

Among those trying to profit from rhino horn is a group of rich and powerful South African rhino breeders. Unlike other rhino species, the southern white rhino, native to southern Africa, can be bred easily in captivity. By treating rhinos like cattle, owners of rhino farms have amassed huge quantities of rhino horn, worth as much as US$ 60,000 per kilo on the black market.

Earlier this year, South African courts authorized rhino farmer John Hume to hold an online auction of his rhino horn stocks. John Hume has five tonnes of rhino horn and wants to be able to sell it to Asian consumers. The court’s decision shocked South Africans and was condemned around the world.

Thankfully, despite explicitly targeting buyers from China and Vietnam, the principal consumer countries, the auction attracted few bidders. This is undoubtedly due to the fact that the CITES global ban on trade in rhino horn remains in place. There was no way that purchasers of John Hume’s rhino horn could, legally, get it out of the country.

The rhino farmers have vowed to continue their campaign to legalize the trade. A statement issued by John Hume’s lawyers following the auction concludes:

Despite government bullying tactics and illogical unsustainable animal rights propaganda, we will continue our fight to bring this dark trade into the light in order to conserve our rhinos.

These claims are false. Current demand for rhino horn is fuelled by fraudulent claims, for example that it can prevent cancer, that were never made by practitioners of traditional medicine.

These fictitious ‘benefits’ have been invented by traffickers as a sales pitch to members of the new Asian super-rich who have money to burn and get a kick out of consuming wildly expensive products made from the dead bodies of endangered animals.

Legalizing the rhino trade will provide the green light for a massive expansion of market, exposing wild rhinos to greater threats from poachers than ever before.

The extent to which rhino farms contribute to conservation of the species is also questionable, to say the least. John Hume has 1250 rhinos on his 8000 hectare farm in South Africa. This is a stocking density more appropriate for cows than large wild animals. It is impossible for these rhinos to develop social structures and patterns of behaviour seen in wild populations.

By contrast the Ol Pejeta Conservancy in Kenya provides a secure habitat for more than 100 Black rhinos that live out their lives in natural conditions alongside other wild animals.

The Conservancy’s mission is “to generate income through wildlife tourism and complementary enterprise for reinvestment in conservation and communities”. In addition to viewing and photograph rhinos in their natural habitat, visitors can help fund conservation efforts by paying to adopt a rhino or naming a baby rhino .

Time is running out for the world’s rhinos. But we can save them through enlightened conservation efforts like those at Ol Pejeta and other conservancies in Kenya and some other African countries — together with zero tolerance of poaching, and trafficking and, especially, those who use rhino horn products.

This article was first published by The Guardian on 22 Sep 2017.

We invite you to share your opinion whether there should be a total ban on trade in rhino horn? Please vote and leave your comments at the bottom of this page.