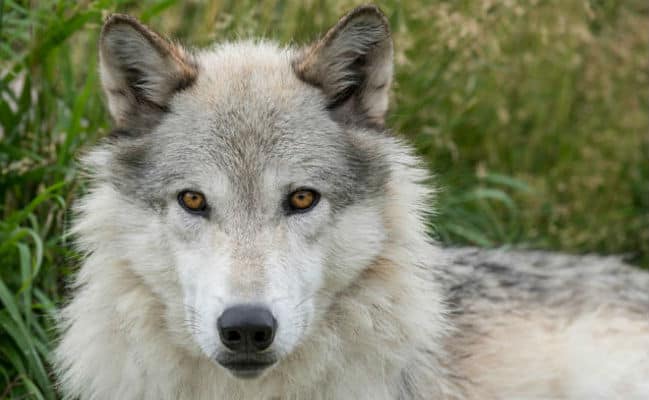 Wyoming has once again begun to allow permits for limited wolf hunting, and new figures show that hunters killed 44 gray wolves between October  and December of 2017.

The AP reports: Ken Mills, lead wolf biologist with the Wyoming Game and Fish Department, said 43 wolves were legally hunted and one illegally hunted in the state during a licensed hunting season from October through December.

That met the state’s hunting quota of 44 set by game managers.

And that’s in addition to the 32 wolves killed elsewhere in the state over the same year — most often in cases where farmers or law enforcement deemed them to be a nuisance predator.

If this figure doesn’t seem high, it’s important to put these deaths in perspective.

Wolves all across the lower states were once hunted to near extinction. The government then stepped in and placed gray wolves under federal protection. But in 2012, the Obama administration decided to de-list the subspecies, putting their care back in the hands of state officials.

At the time, proponents of the move claimed that the wolf population had recovered significantly and no longer required federal oversight. Meanwhile, the Obama administration vowed to maintain data gathering for five years following the decision.

Even so, wildlife groups claimed that the federal government had used incomplete data and made the decision based on financial reasons, rather than acting in the best interest of the wolves.

In 2014 a federal judge reinstated federal protections for the wolves. Unfortunately, that was to be short-lived ruling. A federal appeals court overturned the decision in March of 2016, once again allowing Wyoming to manage its wolf population.

Today, just 380 to 400 wolves call Wyoming home.The state has committed to keeping alive the minimum of 100 wolves and at least 10 breeding pairs, with a goal of increasing that number to150.

If this still seems like too few wolves, it might be because Wyoming has a complex relationship with these animals.Given that the state has a long history of agriculture, residents have often maintained that hunting wolves and other large predators is necessary to protect livelihoods. Wyoming is also a major draw for elk hunters– and wolves prey upon these herbivores.

But existing evidence doesn’t appear to support the claim that wolves are a major problem for livestock farming. As Care2 has previously explored, the actual number of animals taken by wolves remains small. And while livestock predation may have increased in recent years as the wolf population recovered, under 250 animals are killed by wolves per year in the entire state.

In addition, it’s worth pointing out that wolves can be killed on-site if they are considered a threat. In 2016, 113 wolves were killed in this manner –comparatively high, given the size of the wolf population. At any rate,it’s a significant proportion of Wyoming’s wolves, and it begs the question: How many more wolves will the state allow to be hunted for sport when the population remains too low to be considered fully recovered?

Wyoming’s grey wolves need to be protected, not hunted. Sign this Care2 petition calling on Wyoming wildlife officials to intervene and prevent another hunting season in 2018.

We invite you to share your opinion whether Wyoming should prevent the wolf hunting season in 2018? Please vote and leave your comments at the bottom of this page.