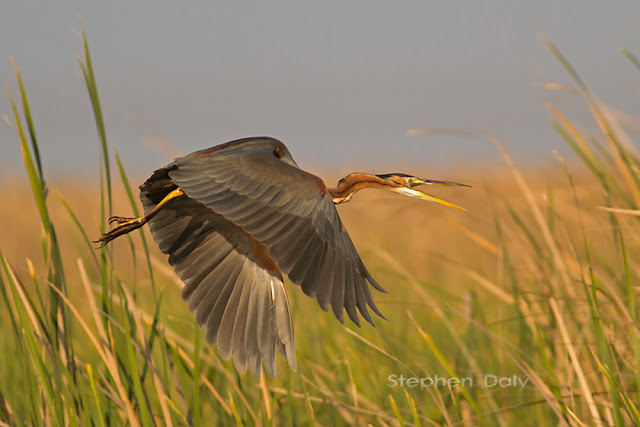 Since moving back to southern Germany I’ve been keen to head up to my ‘local’ nature reserve and catch up with the Purple Heron colony there as well as many other bird species and other wildlife.

Purple Herons are particularly striking birds, especially during the breeding season. Here’s some facts and other information about them.

The Purple Heron (Ardea purpurea) is a large bird, 80-90 cm tall, with a 120-150 cm wingspan, but slender for its size, weighing only 0.5-1.3 kg. It is somewhat smaller than the Grey Heron, from which it can be distinguished by its darker reddish-brown plumage, and, in adults, darker grey back.

It has a narrower yellow bill, which is brighter in breeding adults as shown above. 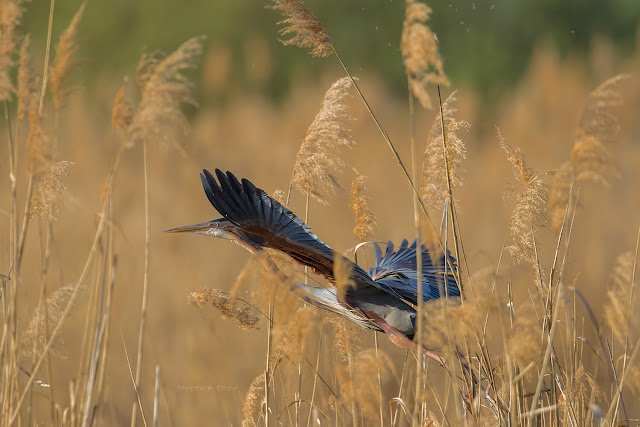 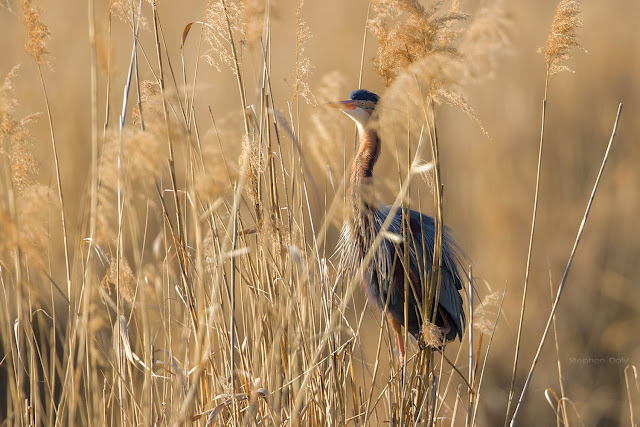 Purple Herons are wading birds in the heron family Ardeidae, breeding in Africa, central and southern Europe, and southern and eastern Asia.

It is a rare but regular wanderer north of its breeding range and the current trend is that the species is expanding it’s breeding range northwards through Europe with the UK now having a small breeding population. 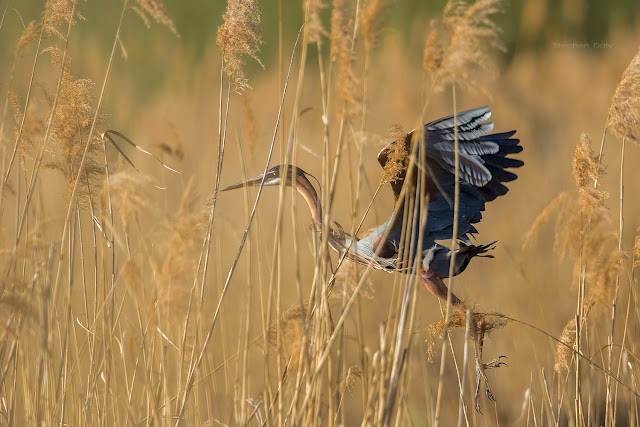 Migration From The Netherlands

Purple Herons seldom migrated alone. It’s been regularly observed that herons from a breeding colony in Kinderdijk, The Netherlands, joined migrating groups. Migration strongly peaked in the 90 minutes hours before sunset and apparently the Purple Herons use this period to form groups and orientate for their nocturnal flights.

Migrating groups headed SSW, avoiding a nocturnal passage over the wide estuaries in the province of Zeeland. Grey Herons (Ardea cinerea)were regularly seen migrating together with Purple Herons, particularly later in the season.

The extensive migration of Purple Herons near Ridderkerk* is presumably the result of its strategic position in relation to five large breeding colonies. The social departure from the breeding grounds is a phenomenon that is unique for Western Europe.

Other migration hotspots for this species are only to be found in the Eastern Mediterranean. 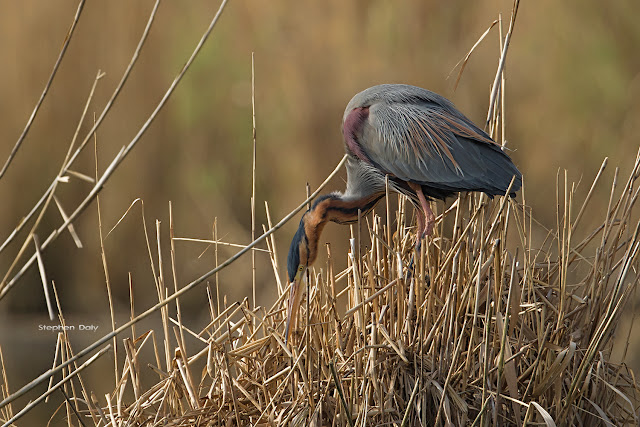 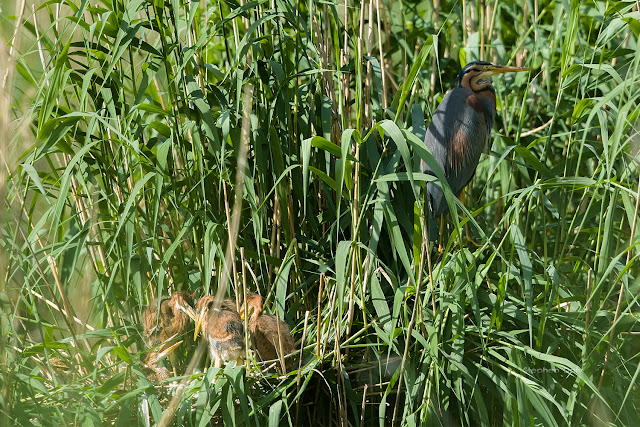 However, the ones ringed in eastern France and which fly through Italy, follow the Po valley eastward to the Adriatic whereas the ones ringed in the Camargue and in Central France also follow the western coast of Italy southwards. Having reached Tunisia, Purple Herons are known to cross the Sahara to the river Niger. However most of them seem not to take this difficult route and follow instead the coast of North Africa westward, joining Purple Herons coming from Spain.

Many birds seem to leave the Mediterranean to reach the Atlantic coast of Africa flying south of the High Atlas mountains. 7 recoveries show that Purple Herons winter in January and February in the coastal areas of tropical west Africa from Senegal to Dahomey. In the spring, they fly back to Europe, either following the coast of west Africa or, reaching the river Niger, they cross the desert to Tunisia from where they fly to Italy. Spring recoveries are particularly numerous in Italy.

Purple Herons wintering in West-Africa have thus the choice between several migration routes; however the most commonly used one seems to follow a very large loop. In the autumn, they fly through Spain and Morocco to reach the Atlantic coast which they follow to winter south of 10° N. In spring they fly to the Niger river and cross the desert to reach Italy and France by the shortest route.

Recoveries are very numerous along the Adriatic coast of northern Italy but there are still no recoveries from East Africa. However, a spring recovery from inland Croatia shows that this bird probably came from the Danube river. Such a bird may have wintered along the large rivers of southern Irak. Purple Herons follow the coasts rather than cross the seas.

In particular, they do not seem to leave France or northern Italy heading directly out to sea in order to reach the coast of north Africa by the shortest route as re-coveries from coastal areas in Spain and Italy are numerous and no recoveries are to be found in Corsica or Sardinia.

They do not seem either to favour crossing mountains but are able to do so, as shown by one observation of 3 Purple Herons flying over a pass (1284 m) in the Pyrenean mountains.

The migration routes of Purple Herons (Ardea purpurea) ringed in France. Available from: 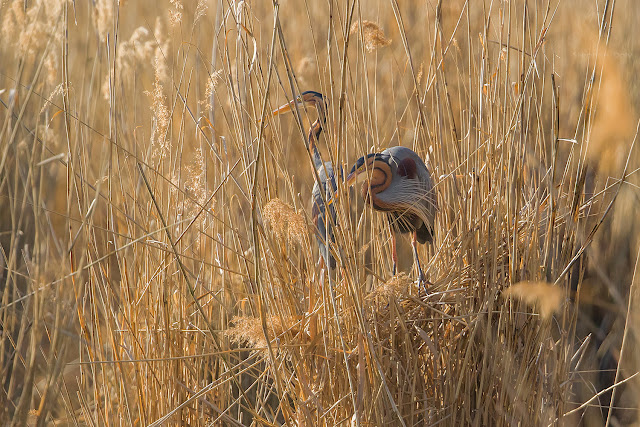 Migration from Europe to the Sahel and Back – Some Facts Large and heavy birds usually use soaring flight during long-distance migration or make regular stopovers en route for substantial refuelling. Purple Herons are large, long-distance migrants. Because of their size, large herons migrating southwards from Europe to Africa were expected to make one or more stop-overs to refuel.

However, data from seven Purple Herons, fitted with satellite transmitters, showed that the herons were able to cover the distance into the Sahel of about 4000 km within 5–7 days. One individual even flew 5600 km non-stop, mostly over sea. The herons migrated mostly at night and partly during the day with a high travel speed indicative of flapping flight. The herons made few diurnal stops in Europe and North Africa.

Substantial ‘stopover’ time was limited entirely to a period of several weeks before departure, and after arrival south of the Sahara. We assume that this is energetically possible for birds with a maximum wing load of 4–5 kg body mass per m2 of wing surface. Larger wing loads as in storks or raptors prescribe soaring or refuelling with the consequence that most migratory journeys to African wintering grounds then take at least a month.

The results emphasize the conservation importance of abundant and high-quality feeding habitat near the breeding areas for pre-migratory fuelling of this species. Furthermore, arrival habitat is likely to be more essential than previously expected.

We suspect that the lack of suitable arrival habitat might explain the observed high adult mortality in dry Sahel periods better than ‘winter’ survival. 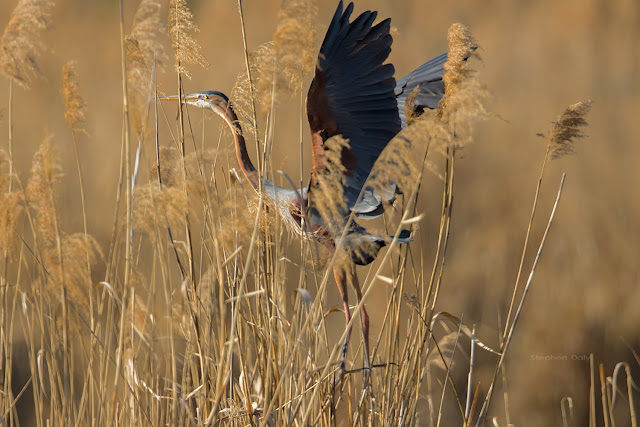 Very little is known about the postnuptial ecology of the Purple Heron. In 2007 and 2008 in total 16 Purple Herons (12 adults) received satellite transmitters.

This finding initiated a field search for Purple Heron night roosts in the Groene Hart region of the Netherlands. In total 483 Purple Herons were counted on roosts. In two sample areas totalling 110 km2, all roosts were located and herons counted. The average number of birds at a roost was 9.2.

Based on the average heron densities in these sample areas (1.8 and 2.8 herons/km2), the total number of Purple Herons in the Groene Hart could be estimated at 1400- 2000, closely matching the estimated breeding population including fledglings. This confirms that almost all Purple Herons stay for some time in feeding areas prior to southward migration. From a conservation perspective it is important to note that only 10.5 % of the feeding habitat is situated within Natura 2000 sites. Potential future impacts on the feeding habitat are discussed.

Purple Herons start their migration to Africa around the end of August. In contrast to previous assumptions, the herons do not depart from their breeding colonies, but directly from the feeding areas. *This explains the high numbers observed during evening migration counts at Ridderkerk (478-694 departing herons in 2002-05). In the feeding areas north and northeast of this site, 470-930 Purple Herons are estimated to stage. The 900-1100 herons from other feeding areas will probably migrate mainly to the east of this counting site.

This means that Purple Herons depart from the Netherlands in a broad front with some concentrations due to landscape characteristics and aggregation into migratory flocks. 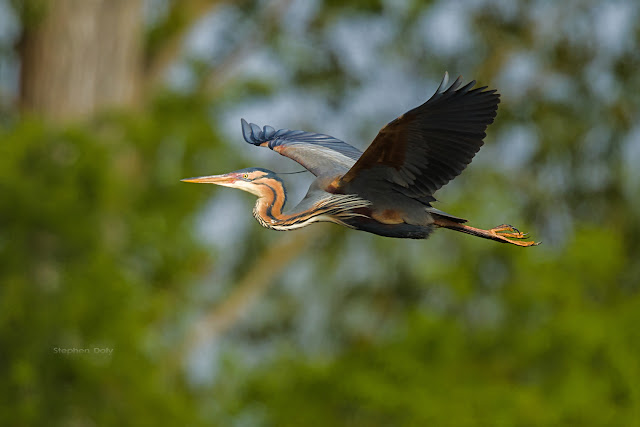 Purple Heron arriving back to breed in Germany, 2017