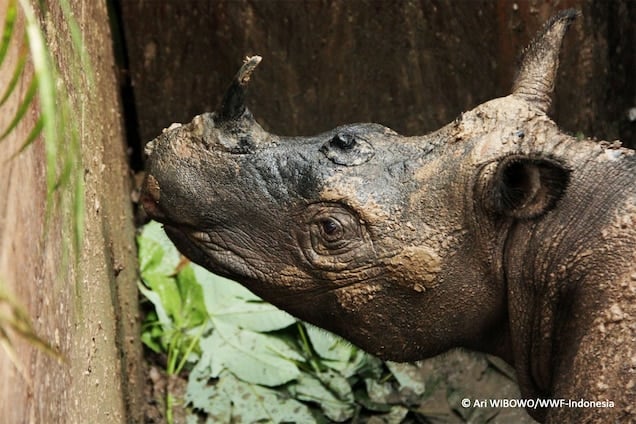 Sumatran rhinos had been thought extinct from Kalimantan, the Indonesian part of Borneo, and hadn’t been physically encountered in the area for 40 years.

But on Tuesday, the World Wildlife Fund (WWF) announced the safe capture of a female Sumatran rhino there, in what the group calls “a major milestone for rhino conservation in Indonesia.”

The rhino is thought to be between four and five years old. It was captured safely in a pit trap in Kutai Barat in East Kalimantan on March 12.

The animal is being held in a temporary enclosure before it is airlifted via helicopter to a more secure place about 93 miles (150 kilometers) away.

There, the rare rhino will be better protected from poachers in what officials hope will become the second Sumatran rhino sanctuary in Indonesia. At least three other animals are expected to be moved there in the near future, in the hopes of starting a more stable breeding population.

“This is an exciting discovery and a major conservation success,” Efransjah Efransjah, the CEO of WWF-Indonesia, said in a statement. “We now have proof that a species once thought extinct in Kalimantan still roams the forests, and we will now strengthen our efforts to protect this extraordinary species.”

The smallest of the world’s five species of rhinos, the Sumatran is covered with patches of stiff hair, especially on its ears. Dark red-brown in color, the animals prefer to live in dense mountain forests, where they are highly elusive. They are usually solitary creatures that feed on fruit, twigs, and leaves, but they can find each other by leaving scent trails, which they can pick up with their keen sense of smell. (Learn more about efforts to save the species.)

Sumatran rhinos can grow up to 1,760 pounds (800 kilograms) and reach a length of 8 to 10 feet (2.5 to 3.2 meters). About 100 Sumatran rhinos are thought to exist in the wild, mostly on the island of Sumatra, making them one of the rarest mammals on the planet.

While their two horns are considerably smaller than those on African rhinos, the appendages are still prized on the black market for purported health benefits, despite scientific evidence proving that such treatments don’t work. Their population has been hammered over the past century by poaching and loss of habitat from deforestation, mining, and other impacts. The rhino was declared extinct from the Malaysian section of Borneo last year.

Although scientists had warned that the Sumatran rhino might have disappeared from Kalimantan years ago, WWF scientists kept looking for evidence of the animals. In 2013, they were rewarded with footprints and an image of one on a camera trap. Based on such work, the team has estimated there are about 15 Sumatran rhinos left in the region, split into in three populations.

She adds, “Given the dire situation of Sumatran rhinos in the wild, it is crucial that isolated individuals such as this female become part of a managed breeding population to ensure the future of the species.”

Sixty-three Javan rhinos—cousins to the Sumatran species—are also thought to remain in the wild, all in Indonesia’s Ujung Kulon National Park (see photos). A few hundred Sumatran rhinos live in zoos around the world, although the animals rarely breed in captivity.

Efransjah calls the rhinos’ plight “a race against time.”

This article was first published by National Geographic on 24 Mar 2016. Lead Image: This female Sumatran rhino has been captured in Borneo, with the goal of moving it to a location that is more secure from poachers. Photograph by Ari WIBOWO, WWF-Indonesia.