The Rufous Bush Robin (Cercotrichas galactotes) is one of my own personal favourite summer visitors. Over the last twelve years living on The Strait of Gibraltar I’ve often had the opportunity to watch and photograph this very special passerine. These birds are often difficult to find and do require some patience to wait and listen for that lovely loud call. 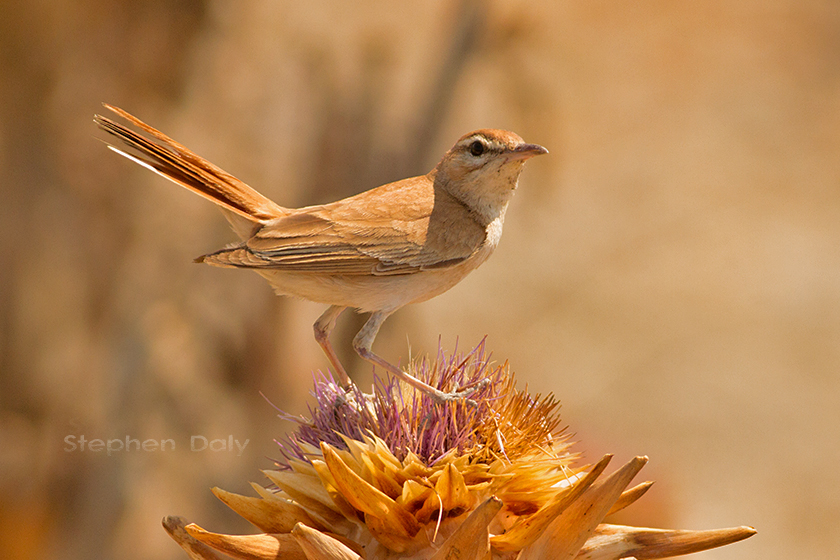 Quite often they’ll be in the company of Woodchat Shrikes and can even have a nest in next tree. The two species assist each other in the art of survival where rearing chicks can be costly if predators are not spotted early enough and are distracted away from their nest sites. Woodchat Shrikes use theirsuperb eyesight scanning out in the distance for Sparrowhawks, buzzards and any other aerial threat.

They are more akin to raptors, mini ones at that and can spot a threat or danger a long way off with those large eyes. They perch on a favourable viewing point on the top edges of trees scanning the surrounding skies and vegetation taking care of the upper level.Each bird knows all the alarm calls of all the other nesting birds which are usually in the same area like Melodious and Sardinian Warblers but Rufous Bush Robins are tuned into the sounds and antics of their closest neighbours the Woodchat Shrikes.

This symbioses works well with the Rufous Bush Robin taking care of garden defence as it were. Scanning the lower areas, particularly the ground cover, watching the through the vines looking closely at surrounding rough land where there are thistles, grasses and ground palms, continually listening and watching checking for unwanted movement that could come from Snakes, Weasel, Fox, Genets and other creatures, even Ocellated lizards out searching for food and what better be better that a nest with eggs or chicks.Both birds have great ability to fly quickly and accurately through tight spaces and can distract and predator by flying towards them at speed then veering off for cover, weaving their way through alabyrinth of vegetation and taking any predator away from their nest site. 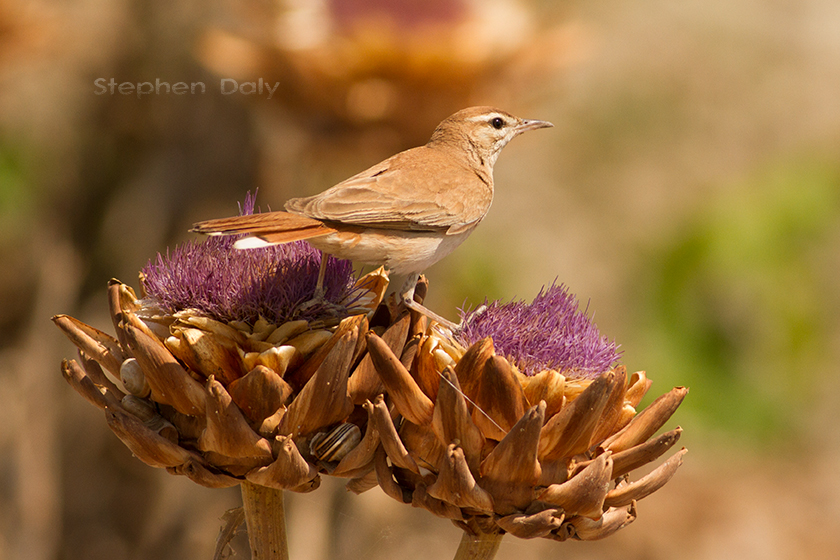 Field Description. 16 cm. A warbler-like thrush with a long tail.Similar at first glance to a Nightingale.Upperparts rufous-grey, supercilium whitish, long, bordered below by dark eye-stripe, underparts whitish. Most obvious field character is the long, rufous, black- and white- tipped tail, which is often cocked, fanned and moved from side to side. Strong long legs and upright chat-like stance. Usually not shy, but remains in dense cover. Song performed from cover, but also from exposed song-post and in fluttery display flight. During displays often shows tail flexibility by bringing the long tail up into a position behind the head.

Distribution. Local and rather rare summer visitor in region. 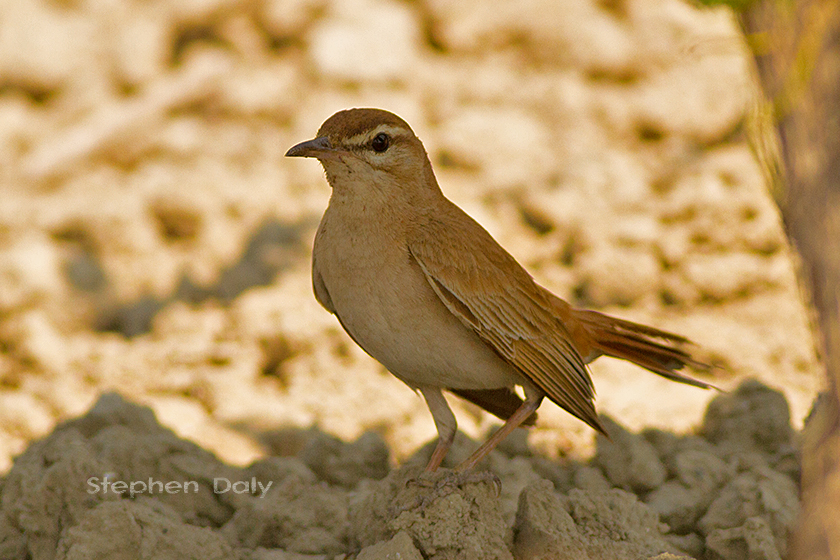 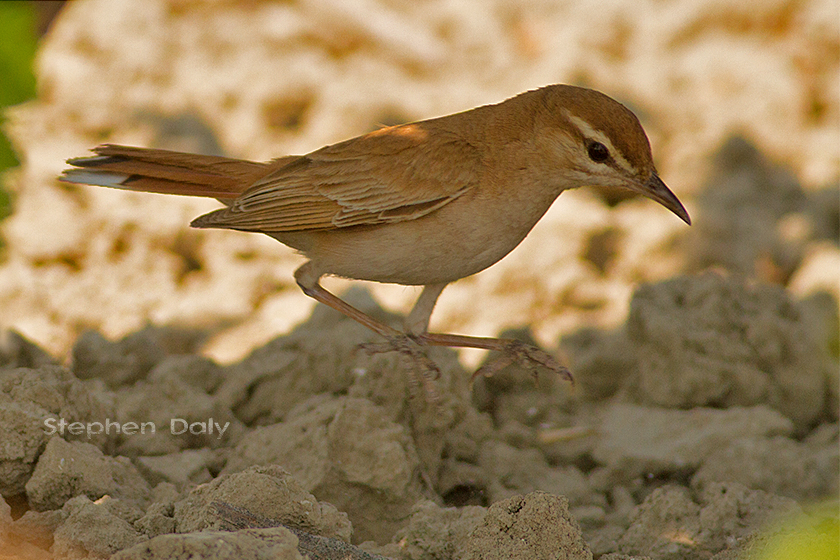 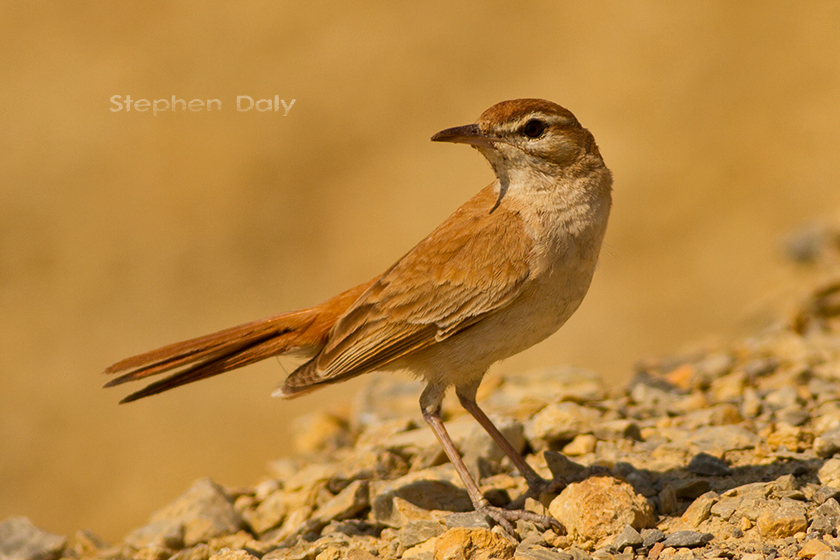 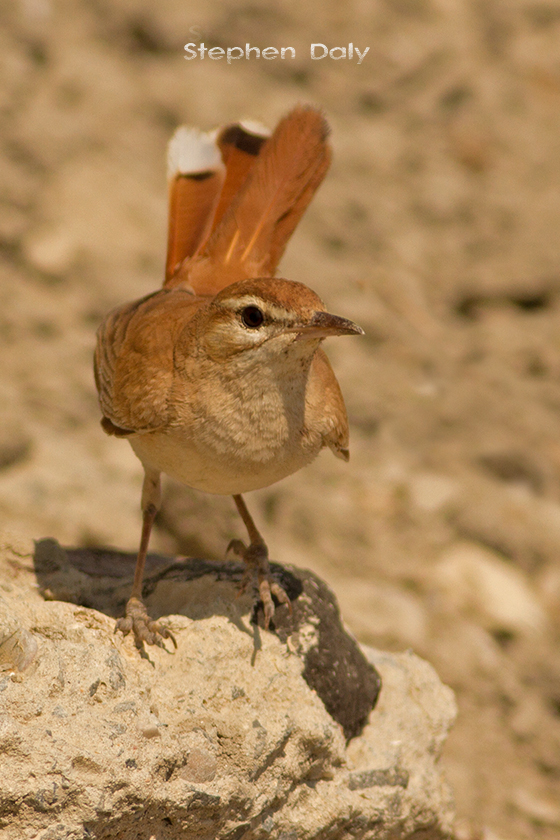