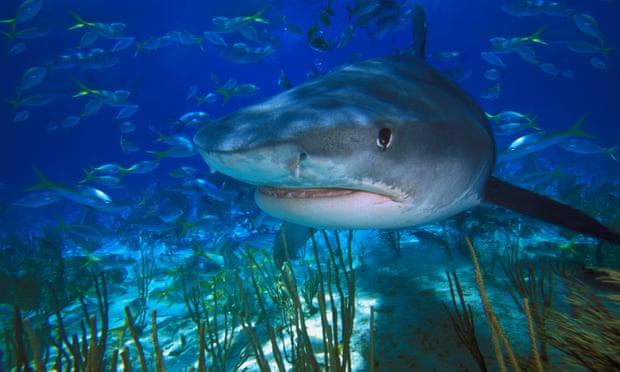 Sharks are critical in helping ecosystems recover from extreme climatic events, according to a new study.

The conclusions came after scientists were able to determine the importance of the apex predator to a unique ecosystem following an extreme marine heatwave in 2011, which wiped out a quarter of one of the world’s largest and most biodiverse seagrass meadows in Shark Bay, Western Australia.

A team of experts from Florida International University (FIU), the University of Washington and Deakin University in Australia, knew from a previous study how tiger sharks in the bay protected the meadows by altering the behaviour of dugongs and turtles, which graze on the seagrass, into less destructive feeding patterns. They wanted to know what would happen if there were no sharks.

“We wanted an answer to the question: can the absence of large predators exacerbate climate change effects?” said Rob Nowicki, lead author and a research affiliate at Mote Marine Laboratory, who conducted the study as a PhD student at FIU. “Can it cause an already bad situation to spiral downwards?”

After the heatwave, which destroyed the seagrass canopy, much of the dugong population temporarily left the bay, setting the stage for a unique field experiment. In a paper published in the Journal of Animal Ecology, the scientists explain how they used a damaged area of the bay, where new heat-resistant seagrass had grown, as their laboratory.

Protecting predator species and keeping these species relationships can actually lead to resilience
Rob Nowicki, researcher
Using calculations based on the grazing rate of dugongs when sharks are absent, they were able to mimic the feeding rate artificially. Scuba divers with trowels reproduced the dugongs’ grazing patterns, periodically excavating the freshly grown seagrass, a practice the scientists called underwater gardening.

“This allowed us to mimic the behaviour dugongs would have if the sharks in the bay magically disappeared, or were overfished,” said Nowicki.

They found that the most important and bigger seagrass canopy did not recover, because it was being disturbed too often by the divers’ grazing. The research shows that when top predators are gone, not only does the structure of the ecosystem break down, but the grazing rate of herbivores makes it impossible to recover.

“It is likely this is happening in places that did not have 15 years of study and did not have this climate event,” said Nowicki. “We are making the case that protecting predator species and keeping these species relationships can actually lead to resilience to these events.”

Dr Mike Heithaus, a marine biologist at Florida International University and co-author of the paper, who has studied the bay for two decades, said: “When everything is hunky dory, we might not realise how important predators are. But when things go wrong – like a climatic event – that’s when you can see the importance of predators.

“The tiger sharks are protecting the seagrass from being grazed. The big seagrass is not the dugongs’ favourite food, which is the little seagrass that moves in when there is a disturbance. But we find that the bigger seagrass doesn’t come back when it is disturbed so often by the grazing.”

This article was first published by The Guardian on 22 March 2021. Lead Image: Tiger sharks protected the seagrass meadows by stopping dugongs and turtles from overgrazing. Photograph: Getty Images.