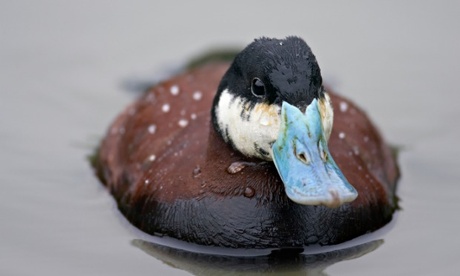 It is American, oversexed and over here, but the days of the ruddy duck in the UK are finally numbered, with the latest culling data revealing that just 10 females remain. The shooting of the final few – at about £3,000 a bird – will mark the end of half a century of occupation by the species. At their peak, their numbers reached 6,500 but their breeding prowess threatened the native European white-headed duck.

The invasion began in 1948 when the famed conservationist Sir Peter Scott’s love for ducks led him to import three pairs of the colourful US birds to his Slimbridge reserve in Gloucestershire. But their escape and consequent flourishing in the British countryside led to an anguished debate among ornithologists decades later, as well as a nationwide cull that has cost more than £5m.

“It was a hugely difficult debate for the RSPB and a very dark day when we had to concede [a cull] was the only way forward,” said Grahame Madge, at the bird charity. “But we stand up for biodiversity internationally and sometimes you have to make very hard decisions.” The British Birding Association wanted the cull to be abandoned and others have argued the money would be better spent on other environmental schemes.

The UK ruddy ducks also spread their wings across Europe, into France, Belgium, the Netherlands and into Spain. The discovery of hybrids in the latter country in the 1990s showed the ducks had grown into a continent-wide threat and that sealed their fate. The following year, an eradication programme began in the UK and a marksmen who has been part of the cull since then told the Guardian the birds fulfil the idea of a sitting duck.

“It’s not particularly difficult to shoot them,” said the marksman, who works for the government’s Animal Health and Veterinary Laboratory Agency (AHVLA) but cannot be named due to the controversy surrounding the cull. “They tend to be creatures of habit, so we keep an eye on the most common sites.”

The duck’s last hideouts are spread across the UK, with one or two females known in most regions, including the north-west, west and the south of England and Northern Ireland. Landowners and members of the public also provide tip-offs, leading to dawn shoots with small-calibre rifles.

“The males are extremely distinctive,” said the marksman, with their foxy feathers and a bright blue bill. “The females less so, but over time you get to know them and the way they swim. Their cocked tail can be distinctive and the way the slip very efficiently into the water when they dive, with no splash.”

Sometimes the display call of the male is played to encourage the birds out of the reeds in which they like to rest. “The birds think ‘what is that?’ and come out to investigate,” he said.

Overall, the cull has cost about £800 per bird, but the great difficulty of chasing the last few has tripled the cost, with more than £1m spent in the last five years. About 40 ruddy ducks are left in total but the effort is being focussed on the 10 females. A spokeswoman for the Department of Environment, Food and Rural Affairs said a European wildlife treaty binds the UK to eradicating the ruddy duck by the end of 2015. “We expect to succeed,” she said.

The AHVLA marksman said: “It is certainly doable, but it’s partly down to a bit of luck and to siteowners giving us the access we need. I’m keen to get the job done as quickly as possible.”

Hunting down the last few ruddy ducks and ending a chapter in the UK’s ornithological history is necessary, said Madge. “It’s not being ruthless, it’s being careful and we want to be spared that threat again,” he said, noting the whole problem began with just a few birds. “It is not a cause for celebration. It is a relief.”

This article was written by Damian Carrington for The Guardian.