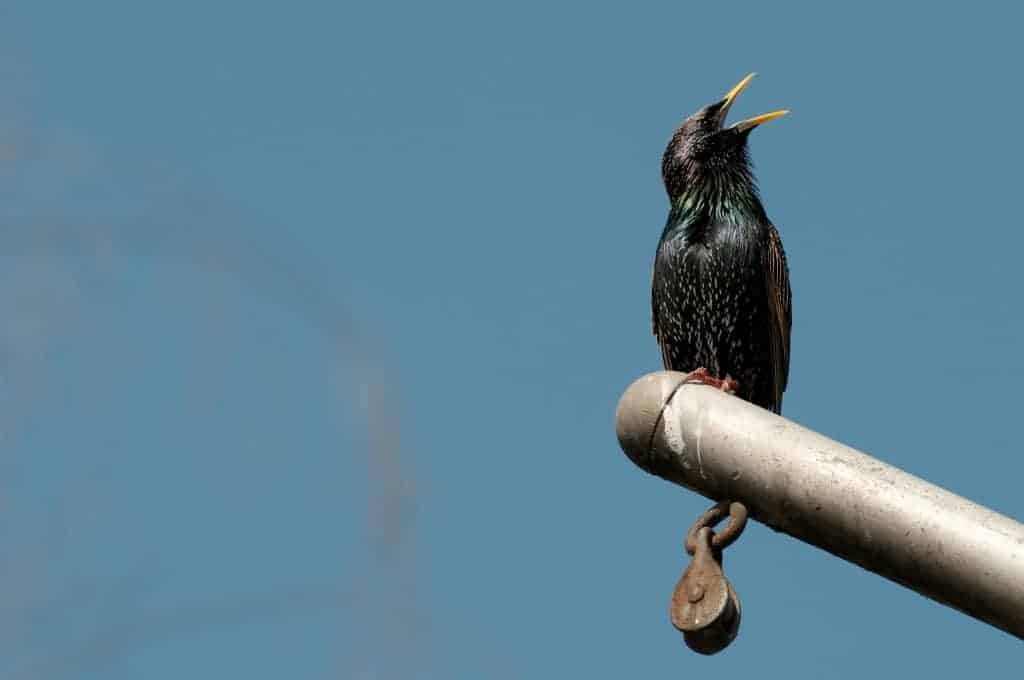 If you happen to be a small bird living in the city, you’re facing a big dilemma. Online dating and electronic security systems aren’t an option—you’re responsible for finding a mate and protecting your own territory. You do this by singing. But the metroplex is loud; sometimes Gotham’s growl of traffic, heavy machinery, and other urban background noise grows to more than 90 decibels (dB). To be heard, a birdsong needs to be at least 24-30 dB above the din, and the further the sound has to travel, the louder it needs to be for reception by its target audience. This is a hard nut to crack, because according to several sources I found, even up close and personal the average songbird belts out its tunes at around 65 dB.

How can an urban avian get some airtime when the only tool at his disposal is an innate understanding of acoustics? Well, you could shout—and some birds do. Nightingales (Luscinia megarhynchos) living in Berlin, for example, were found singing up a storm… 14 dB louder than those living in Germany’s forests. But screaming at the top of your lungs takes a lot of extra energy. (If you don’t believe this is true, try it yourself. But please, for the sake of your neighbors, cover your pie-hole with a pillow first). Yelling is also tough on the old pipes, and could attract the attention of certain predatory characters.

A recent study by researchers at the Universities of Aberystwyth and Copenhagen suggests there is a better way. Don’t sing louder; sing higher.

These earlier studies have attributed the popularity of falsetto among featherheads to competition for acoustic space, caused by the greater presence of low-frequency noise in urban habitats. But Mockford et al. report the physical structure of the city may contribute to the change in bird behavior, since the transmission efficiency of rural song compared to urban song was significantly lower at the urban study sites.

The Acoustic Adaptation Hypothesis (AAH) originally proposed by E.S. Morton (1975) anticipates that birds will adapt their songs to the sound transmission properties unique to their local habitat. However, Morton et al. state that their work does not support AAH, suggesting instead that the effect of habitat on song degradation may play a larger role than originally thought. In rural areas, where a male bird would find it more difficult to locate a rival signaling in the forest canopy, degradation provides direction and distance cues. Urban habitats generally have fewer trees, so song posts are more visible. In the city, it seems, making sure your message can compete with ambient noise and be delivered to its intended audience is more important than the subtle cues that may be encoded in that message.

The Mockford, Marshall and Dabelsteen paper is available (full-text) online. For more on birdsong and other urban wildlife issues, visit Kieran’s blog, Next-Door Nature. Thanks to the following photographers for making their work available for use through a Creative Commons license: Kenny Louie (European starling);Kev Chapman (nightingale); and Keith (song sparrow).

It’s interesting what you come across when you’re not looking! I had recently been thinking to myself why I could hear some of the softer-sounded birds, such as our local blackbird, despite the very loud traffic and other noise coming from a major thoroughfare right next to where I live, in South Melbourne (Kingsway and Park), Australia. Noisy and smelly! Other higher-cheepers, such as the beautiful little silver eye, can also be heard most clearly. I had guessed they sang at a frequency obviously quite different from the noise I was hearing…to me it sounded in the higher band of… Read more »

You know, Janina, the “natural” habitats vary greatly from one part of the world to another, but isn’t it interesting, in spite of the diversity of human cultures, ALL urban habitats share a great deal in common. I guess that may go to show that humans have an innate preference for a certain kind of living arrangement, or maybe that there’s only so many ways you can pack a bunch of people into a small space. Regardless, there’s no doubt we are homogenizing our planet. Sadly, the simpler the ecosystem, the more unstable it becomes.

Kieran, interesting article – I can almost hear them trilling!

Thanks, Ken. Maybe we can become more aware of the impact urban habitats are having on our own behavior by learning about the ways other species are coping.