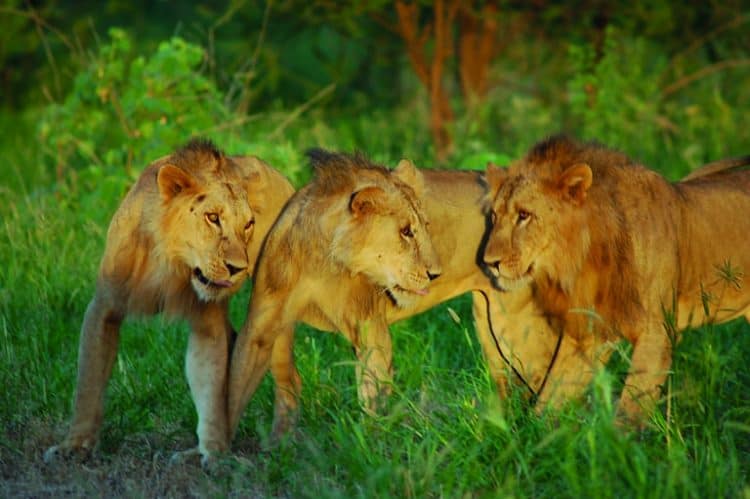 This past weekend, Disney’s newly released version of The Lion King shattered box office records by earning $544 million in theaters around the world.

But while Simba and Mufasa’s return to the big screen is good news for Disney and summer movie fans, in the quarter-century since the original animated version of The Lion King was released, Africa’s lion population has declined by roughly half.

With only about 20,000 lions remaining in Africa, and their historic range having contracted by over 80 percent, the lion’s future is increasingly uncertain.

In the face of these challenges, lion conservation is becoming a more urgent priority, particularly given the important role that lions play in African economies through wildlife tourism.

In Tanzania, for example, home to perhaps half of all the remaining wild lions left in the world, lions are a cornerstone of a national tourism industry that earns over $2 billion annually and accounts for roughly a quarter of all foreign exchange earnings.

But, although lions bring economic value through tourism, these predators also impose significant costs on local communities living alongside wildlife in rural areas.

The economic cost of livestock predation by lions on Kenyan ranchers in some areas is nearly $300 annually — which can amount to over a quarter of herders’ per capita annual income.

This illustrates a fundamental challenge for the conservation of lions and other large mammals in Africa today: balancing the economic costs and trade-offs to local people of living with wildlife. When lions and other predators kill livestock, local communities often respond by shooting, spearing, or poisoning the offending animals.

This is a central factor in the decline of lions in countries such as Kenya, where there are now probably less than 2,000 lions left. Even in large national parks, lion numbers often decline when animals wander out of parks and come into conflict with neighboring communities.

Fortunately, when conservation programs are able to provide people with reasons to support lion conservation, local communities can become key stewards of lions and other wildlife.

For example, in both Namibia and Kenya there are a growing number of community-managed ‘conservancies,’ where communities and rural landowners set up their own conservation areas. By entering into agreements with tourism companies, these conservancies generate revenue that creates economic value from lions at the local level.

In Kenya’s Maasai Mara, for example, about 17 conservancies now help protect approximately 1,400 square kilometers (about 541 square miles) of some of the world’s best lion habitat. Lion numbers in some of these conservancies have recovered, and are now at higher densities than in nearby government reserves.

Similarly, in Namibia, lion numbers increased six-fold in the country’s arid northwest after conservancies were established starting in the late 1990s. The key in both cases is that local communities are able to earn revenue from lions, and are empowered to run their own conservation programs on their lands through the conservancies.

Indigenous customs and knowledge can also play a key role in these kinds of locally rooted conservation efforts and support co-existence of people and lions. In Kenya’s southern Rift Valley, traditional Maasai livestock management systems involve setting aside large areas of pasture for grazing only during the dry season and droughts.

These customary seasonal restrictions on pasture access help protect wildlife habitat, bolstering prey for lions and other predators. Traditional communities such as the Maasai also have exceptional tolerance of wild carnivores as a result of unique cultural values.

Recent research shows that despite lion densities that are some of the highest in Africa, more than 85 percent of residents in this area support lion conservation efforts designed to maintain these numbers.

Another initiative embracing indigenous customs to promote co-existence and reduce the costs of living alongside lions is Lion Guardians, also based in southern Kenya. By hiring local Maasai warriors — including those with past history of killing lions in their community — as ‘Guardians,’ they have been able to reduce lion mortalities caused by people by over 90 percent.

This has helped the lion population in Kenya’s Amboseli ecosystem more than quadruple over the past decade. This kind of model of community-based conflict reduction has been adapted — and delivered similar results — in other key lion areas, such as Tanzania’s Ruaha ecosystem.

For lions to thrive in modern Africa, where human populations, settlements, and infrastructure are all rapidly expanding, these are the kinds of locally driven conservation approaches that need to be supported and scaled up. This means increasing investment in strategies that promote tolerance of people towards lions by increasing local benefits and reducing local costs as a priority across their range.

As the The Lion King returns to theaters this summer, it bears noting that one key species is missing from the film’s African landscape, as with many depictions of African wildlife: people. But it is the humans that live near and among lion populations all throughout Africa who hold the key to wildlife’s survival and recovery.

Conservation efforts need to genuinely benefit local communities, by empowering them to make key decisions, capture the economic value of lions, and manage the costs of co-existence according to local interests. Only then will Simba’s domain persist and the lion’s future renew through the years ahead.

Fred Nelson is Executive Director of Maliasili, a US-based organization that supports leading African conservation organizations to increase their impact and effectiveness.

John Kamanga is Executive Director of the South Rift Association of Land Owners (SORALO), a community association that works across over one million hectares of Maasai land in southern Kenya.

This article was first published by Mongabay.com on 25 July 2019.