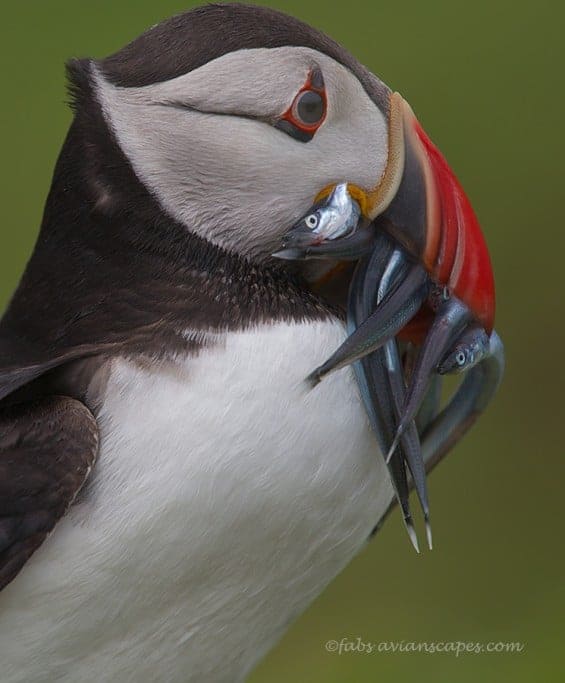 The island of Skomer is located off the South West coast of Wales. It is one of a chain of islands separated from the Pembrokeshire coast by the waters of Jack Sound.

The island is almost 3 square kilometers, and besides being a spectacular place, it’s one of the most accessible seabirds colonies in Europe. It is designated as a National Nature Reserve and also a Site of Special Scientific Interest.

The most known residents are the Atlantic Puffins, nesting in burrows on the top of the island. Puffins are seabirds and only come to land to breed, staying just long enough for the chicks to be able to throw themselves in the water, where they will stay from two to fours years, until they are ready to breed themselves.

Other well known residents are the Manx Shearwater, who are in the ocean fishing during the day and come back to rabbit burrows at night, making very loud calls. They are easy pray to the Herring Gulls, and you can see a lot of skeletons and feathers as you walk your way to the Wick, where the best backgrounds and proximity to the Puffins are.

Getting there is not what we’d call a smooth operation. Boats sail from Martin Haven and there are few accommodations close. They do not accept reservations and tickets are gotten via queue. And this is where it gets interesting.

Tickets go on sale at 7AM, so you need to be in line much before that time if you want to sail in the first boat. Once you got your tickets, you need to hang out doing nothing until sailing time, which is normally 10AM, unless otherwise stated when you got the tickets. Another queue takes place close to sailing time to get on the boat. We were very fortunate to have a friend get the tickets for us and even pick us up at our Bed and Breakfast so we wouldn’t have to sit around Martin Haven and could rest. We even had time to have a full delicious English breakfast, including blood sausage and other non-identified delicacies. The bacon (more like ham than our bacon) is worth flying nice hours for.

Ready to rumble we went on our unknown destination and discovered a beautiful pristine island covered in purple flowers as we walked our one mile long path to the Wick, prime spot. As we first landed, the Warden gave us an informative talk and made it very clear that we needed to stay in the paths at all times, to avoid stepping into someone’s burrow. Rabbits also nest underground, so you get the point.

The administrators of the island only allow 250 persons on the island on a given day, except a couple of times a year, when they allow one more boat. We were lucky not to be there on one of the mot crowed days, because space could be a problem given that the Wick is not large. I could see it being very difficult to shoot if more photographers or birders were there.

The Puffins are totally used to people and not shy at all. In fact, I think they feel protected by us from the attacks of the Herring Gulls, always-opportunistic stealers.

Rather than go fishing, given their size, they just wait for the poor Puffins to fly in with a mouthful to attack, and a hit and run manner. They will also try and get young chicks out of their burrow for a meal, whenever possible.

The path separates both sides of the Wick, cordoned. Puffins nest on both side and will sometimes land on the ocean side, crossing the path walking. If you are standing on their way, they make eye contact with you, asking you to please move, then continue. If you can’t move because there is someone next to you, as it was on one occasion, he/she stepped on my foot and kept walking. Needless to say I was thrilled by the honor.

No need to bring a long lens here, since Puffins are to be had even with the iPhone.

We brought the 500mm on our first day and regretted the weight for the walk, since we did most everything with the 70-200/4 plus the 1.4X, using a couple of 25 extension tubes if we needed head portraits.

There were no daisies by the Wick, I hear the rabbits have been feasting on them, which was a shame, because they would have looked beautiful in the pictures. Not to complain, the backgrounds are spectacular and you have the choice of blue or green, depending on the light direction and the side of the path.

Other birds present in the island are Guillemots and Razorbills, and you can see plenty of them by the dock. There even one nesting right next to the stairs up this year.

I will never forget this beautiful place and hopefully can go back someday. There is a video available at our personal Blog, link bellow.

If you want to keep up with what’s going on in the island, check:

For more from Fabiola Forns, visitAvianscapes.comor her BlogCasaforns.wordpress.com, where you can see a video captured at Skomer.