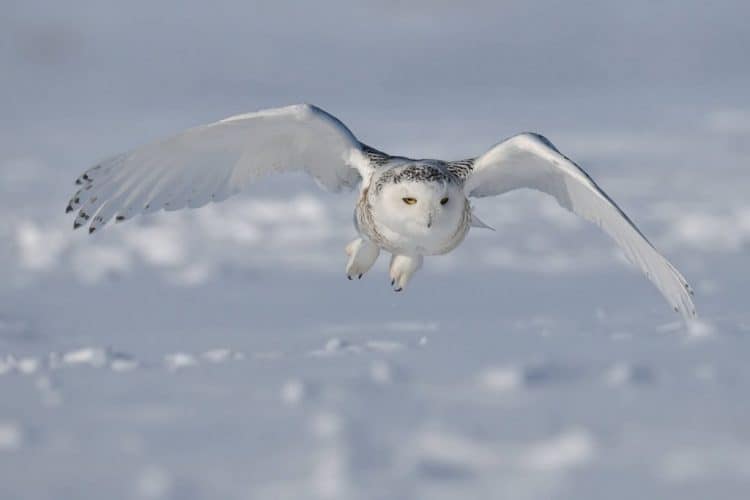 Striking, widespread and widely recognised, thanks in part to the Harry Potter books, the Snowy Owl Bubo scandiacus was previously listed as Least Concern, the lowest threat category of the IUCN Red List. However, this assessment was based on earlier figures that estimated the global population to number around 200,000 individuals, and the absence of evidence of significant declines.

More recent work by Eugene Potapov, Richard Sale and other researchers suggests that this difficult-to-survey species has a more patchy distribution than previously thought, concentrating in seven loose agglomerations. As a result, the earlier figures have been revised down to c. 14,000 pairs.

However, the situation is complicated as the species’ population and range naturally fluctuates in response to the availability of its prey, which during the summer breeding season consists almost exclusively of various larger species of lemmings of the genera Dicrostonyx and Lemmus.

In poor years it is now estimated that the global population could drop as low as 7,000 (or perhaps even 5,000) pairs.

In addition, Snowy Owls may also be undergoing high rates of population decline due to illegal hunting, and collisions with vehicles and power lines. The effects of climate change are also likely to be a significant threat, as changes to snowmelt and snow cover can affect the availability and distribution of prey. On the basis of these apparently rapid rates of decline, the species’ global threat status has now been uplisted to Vulnerable.

“These ongoing – and, in the case of climate change, potentially worsening – threats, are driving declines that have resulted in the Snowy Owl having its global threat status upgraded, which means that this species faces a high risk of extinction in the wild in the medium-term future.

The dramatically revised population estimates are a further source for concern, and the species must now be a high priority for further research and conservation action,” says Andy Symes, Global Species Officer, BirdLife International.

This article was first published by BirdLife International on 04 Jan 2018.

Snowy owls nest in the Arctic tundra of the northernmost stretches of Alaska, Northern Canada, and Eurasia. They winter south through Canada and northern Eurasia, with irruptions occurring further south in some years. Snowy owls are attracted to open areas like coastal dunes and prairies that appear somewhat similar to tundra. During irruption years when they are found in the Northeastern US, juveniles frequent developed areas, as well as the expected grassland/agricultural areas that older birds primarily utilize. All ages spend a fair amount of their time over water in the Great Lakes and Atlantic Ocean, mostly on ice floes.[7]… Read more »

Climate-change again is it? Are there any wind-farms being built within their range would be my question.

Would be more than cool to see a Snowy Owl!!!