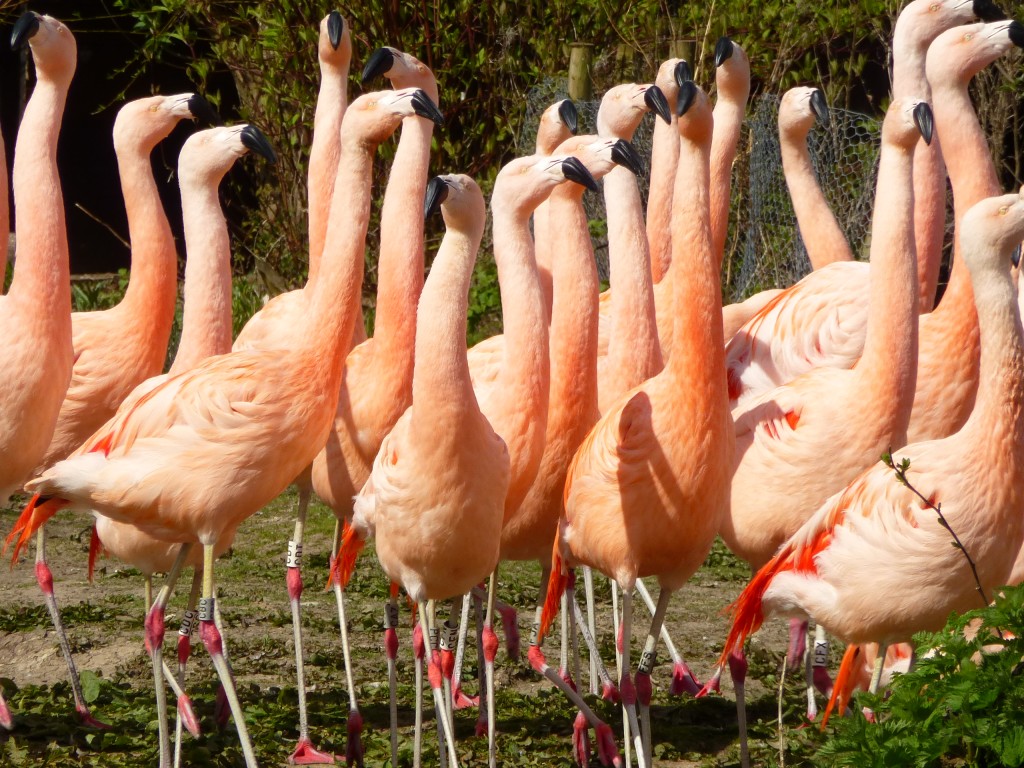 Receiving more ‘likes’ can boost a flamingo’s chances of attracting a mate, according to research taking place at WWT Slimbridge Wetland Centre. Just like Facebook-style online social networks, flamingo flocks contain lots of separate groups of friends which often gravitate around key individuals. Researchers are identifying these key individuals by recording how many ‘likes’ each flock member receives – eg. how many times each bird is chosen by others to associate with, through joint bathing or preening together etc.

The birds with many ‘likes’ become the centre of the flock’s life – part of the ‘in crowd’ who collectively decide where and when the flock rests, displays or nests.

The popular individuals may not be the tallest or strongest in the flock, but research shows their popularity also helps them to be at the forefront when the flock feeds. This keeps them in better shape, which makes them more desirable to potential mates.

“The ability to source food – and being in good condition as a result – makes a flamingo attractive as a good potential parent to mate with. Well-fed popular flamingos are often the pinkest, because flamingos get their pink colouring from the shrimps and algae they eat.

“But conversely, we’re finding being unpopular sometimes isn’t a hindrance. Some flamingos receive fewer ‘likes’ but they don’t need quantity because they already have the quality friends or partner they want and need.”

Flamingos breed as flocks and WWT’s research aims to find out more about the social balance which can affect when, or even if, a flock begins its breeding behaviour. The research uses captive flamingos at WWT wetland centres which are individually marked, making it possible to keep track of each individual and relate their behaviours to their age and sex among other characteristics. The research will provide information to other zoos to keep their captive flamingos happy and healthy, which could become important for the survival of the species if wild flamingo populations crash.

Four of the world’s six flamingo species are classed as ‘Vulnerable’ or ‘Near Threatened’ by the International Union for Conservation of Nature (IUCN). Despite there being almost five million flamingos in the world today, the total number of major flamingo breeding sites, worldwide, is thought to number fewer than 30. Over 75% of the global population of lesser flamingos breeds at just one site in East Africa. Although flamingos are numerous, they are threatened by the loss or degradation of these key sites. The main threats include water abstraction, mining and pollution.

Paul is raising money for his work through Exeter University, you can support him by clicking on this link http://www.justgiving.com/Paul-Rose4

This article was written and published by National WWT News