Ken Billington, founder of the Focusing On Wildlife blog, spends a lot of time on the West Coast of Ireland each year.  This coastline on the western edge of Europe, has a very low population density and wildlife is abundant. Of the 211 bird species in Ireland 9 species are classified as “Threatened” and 12 as “Near Threatened”.  Ken loves to photograph the many iconic species in the area whenever he gets the chance. 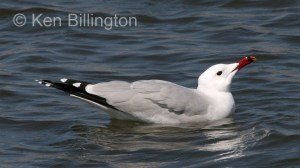 The Audouin's Gull (Ichthyaetus audouinii) is a large gull restricted to the Mediterranean and the western coast of Saharan Africa. It breeds on small islands colonially or alone, laying 2-3 eggs on a ground nest. As is the case with many gulls, it has traditionally been placed in the genus Larus. 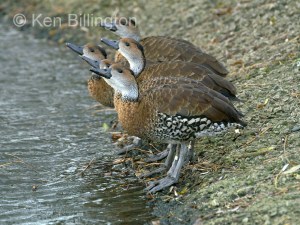 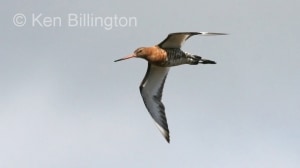 The Black-tailed Godwit, Limosa limosa, is a large, long-legged, long-billed shorebird. It is a member of the Limosa genus, the godwits. Its breeding range stretches from Iceland through Europe and areas of central Asia. Black-tailed Godwits spend winter in areas as diverse as Australia, western Europe and west Africa. The species breeds in fens, lake edges, damp meadows, moorlands and bogs and uses estuaries, swamps and floods in winter. 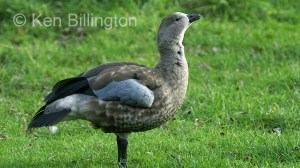 The Blue-winged Goose (Cyanochen cyanoptera) is a large goose, which is endemic to Ethiopia. It is the only member of the genus Cyanochen. 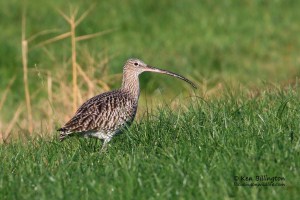 The Eurasian Curlew, Numenius arquata, is a wader in the large family Scolopacidae. It is the one of the most widespread of the curlews, breeding across temperate Europe and Asia. This is a migratory species over most of its range, wintering in Africa, southern Europe and south Asia. Occasionally, a vagrant individual reaches places far away from its normal range, such as Nova Scotia or the Marianas. It is present all year in the milder climate of Ireland, Great Britain and the adjacent European coasts. 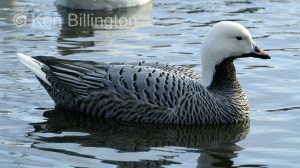 The Emperor Goose (Chen canagica) is a species of goose. It breeds around the Bering Sea, mostly in Alaska, USA, but also in Kamchatka, Russia. It is migratory, wintering mainly in the Aleutian Islands. 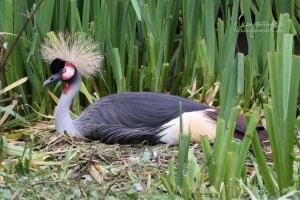 The Grey Crowned Crane (Balearica regulorum) is a bird in the crane family Gruidae. It occurs in dry savannah in Africa south of the Sahara, although it nests in somewhat wetter habitats. 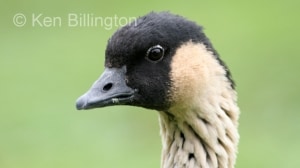 The Hawaiian Goose or Nene, Branta sandvicensis, is a species of goose endemic to the Hawaiian Islands. The official bird of the State of Hawaii, the Nene is exclusively found in the wild on the islands of Maui, Kauai and Hawaii. The Nene gets its Hawaiian name from its soft call. 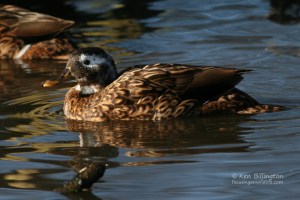 The Laysan Duck (Anas laysanensis), also known as the Laysan Teal because of its small size, is an endangered dabbling duck endemic to the Hawaiian Islands. Fossil evidence reveals that Laysan Ducks once lived across the entire archipelago, but today survive only on three small, isolated islands. 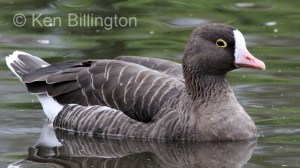 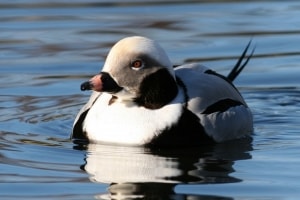 The Long-tailed Duck (Clangula hyemalis) is a medium-sized sea duck. Their breeding habitat is in tundra pools and marshes, but also along sea coasts and in large mountain lakes in the North Atlantic region, Alaska, northern Canada, northern Europe and Russia. They are migratory and winter along the eastern and western coasts of North America, on the Great Lakes, coastal northern Europe and Asia, with stragglers to the Black Sea. The most important wintering area is the Baltic Sea, where a total of about 4.5 million gather. 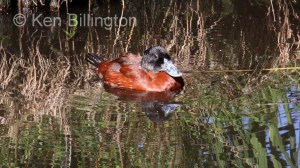 The Maccoa Duck (Oxyura maccoa) is a small, long African stiff-tailed duck. Adult males have a chestnut body, a blue bill and a black head. Adult females have a grey-brown body, with a dark grey bill and a dark brown crown, nape and cheek stripe. This duck breeds in two main areas: eastern Africa from Sudan and Ethiopia to Tanzania and west to eastern Zaire, and southern Africa from Zimbabwe to Cape Province, South Africa. Their breeding habitat is shallow fresh waters, and they are also found in brackish and saline lakes in winter. 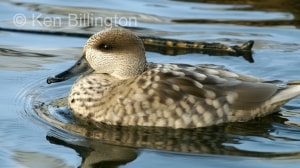 The Marbled Teal (Marmaronetta angustirostris), is a medium-sized duck. It used to be included among the dabbling ducks, but is now classed as a diving duck. This duck formerly bred in large numbers in the Mediterranean region, but is now restricted to a few sites in southern Spain and northwest Africa. In the east it survives in Iran (Shadegan Marshes - the world's most important site), as well as isolated pockets in Turkey, Armenia, Azerbaijan and Iraq. 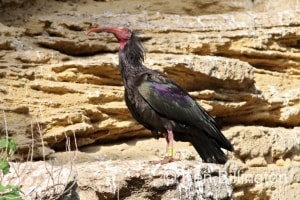 Historically, the species occurred across parts of southern Europe, and captive populations have been maintained in Austria (at Grünau, 22 birds, now breeding) and Spain, with a long-term aim to re-establish the species in parts of its former range. Around 30 birds have now been released in the La Janda area, Spain. This species has undergone a long-term decline and now has an extremely small population, with over 95% of truly wild birds concentrated in one subpopulation in Morocco. 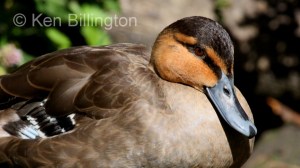 The Philippine Duck (Anas luzonica) is a large dabbling duck of the genus Anas. Fewer than 10,000 remain. It has a black crown, nape and eye stripe, with a cinnamon head and neck. Rest of body is greyish brown with a bright green speculum. Its legs are greyish brown, and its bill is blue grey. It eats shrimp, fish, insects, and vegetation, and it frequents all types of wetlands. 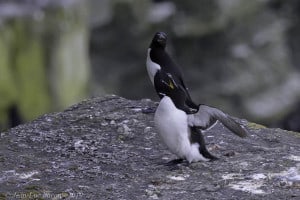 The Razorbill (Alca torda), a large auk, is the only living member of the genus Alca. Their breeding habitat is islands, rocky shores and cliffs on northern Atlantic coasts, in eastern North America as far south as Maine, and in western Europe from northwestern Russia to northern France. This species has undergone moderate declines in Europe, including very rapid declines in Iceland since 2005. Crashes in sandeel stocks around Iceland may be a contributing factor in the declines. The species is, therefore, listed as Near Threatened. 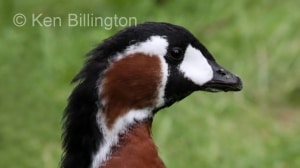 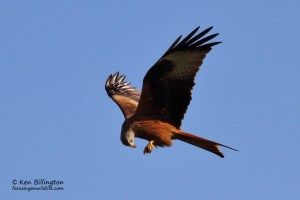 The Red Kite (Milvus milvus) is a medium-large bird of prey in the family Accipitridae, which also includes many other diurnal raptors such as eagles, buzzards and harriers. The species is currently endemic to the Western Palearctic region in Europe and northwest Africa, though formerly also occurred just outside in northern Iran. It is a rare species which is resident in the milder parts of its range in western Europe and northwest Africa, but birds from northeastern and central Europe winter further south and west, reaching south to Turkey. Vagrants have reached north to Finland and south to Israel and Libya. 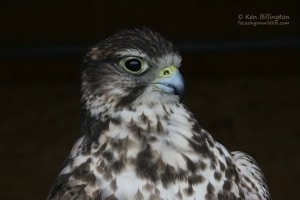 The Saker Falcon (Falco cherrug) is a very large falcon. This species breeds from eastern Europe eastwards across Asia to Manchuria. It is mainly migratory except in the southernmost parts of its range, wintering in Ethiopia, the Arabian peninsula, northern India and western China. 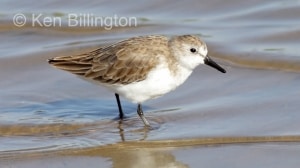 The Semipalmated Sandpiper, Calidris pusilla, is a very small shorebird. Their breeding habitat is the southern tundra in Canada and Alaska near water. They are long distance migrants and winter in coastal South America with some going to the southern United States. They migrate in flocks which can number in the hundreds of thousands, particularly in favoured feeding locations such as the Bay of Fundy and Delaware Bay. This species is a rare but regular vagrant to western Europe. 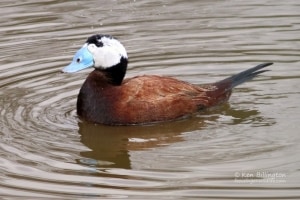 The White-headed Duck (Oxyura leucocephala) is a small stiff-tailed duck. This duck breeds in Spain and North Africa, with a larger population in western and central Asia. Their breeding habitat is large tracts of open water with dense stands of aquatic plants to provide cover and nesting sites. 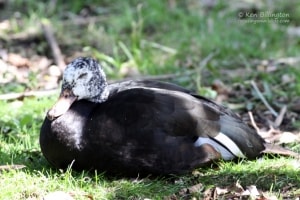 The White-winged Wood Duck, Cairina scutulata is a species of duck, usually placed in the genus Cairina and allied with the dabbling ducks. Historically, the White-winged Wood Duck was widely distributed from north-east India and Bangladesh, through South East Asia to Java and Sumatra. However, in 2002 it had a population of only 800, with about 200 in Laos, Thailand, Vietnam and Cambodia, 150 on Sumatra, notably in Way Kambas National Park and 450 in India, Bangladesh and Burma. 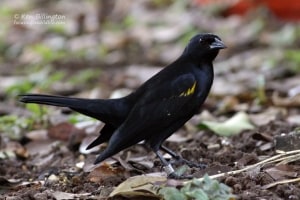 The Yellow-shouldered Blackbird (Agelaius xanthomus), also known as La Mariquita de Puerto Rico or Capitan, is a diurnal blackbird endemic to the archipelago of Puerto Rico and one of the eleven species belonging to the Agelaius genus of the Icteridae family.