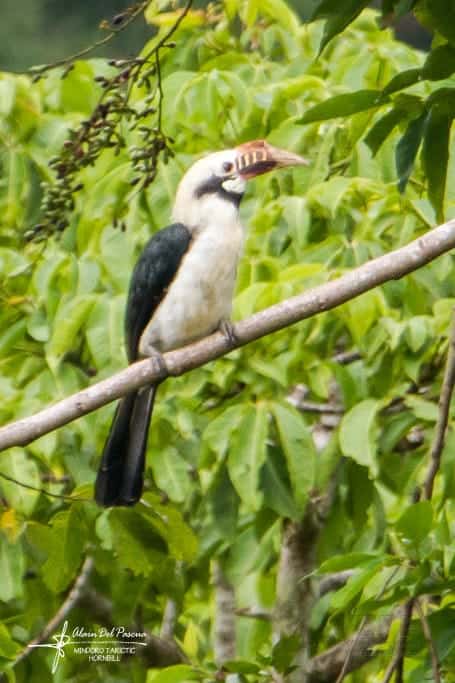 For the last four hours of stay in Sablayan, our single wish was just to have photos of the MINDORO TARICTIC HORNBILLS which we have a quick glimpse the previous day. We have climbed a stiff ascent early that day in Siburan Subprison without having photograph a single bird, and we were beginning to get frustrated, so much so that our fellow photographer Keith Sundiang chose not to do the last trek because of sheer exhaustion. But off we go for the last chance, our prayers were stronger than our complaints. Our spirits were very willing even if our muscles were trembling.So WBPP fellows Ven Rojas, Jude Sanchez and I continued birding!

One more ascent, still no birds, good for Keith we said, so we hurriedly crossed newly cultivated paddy fields and into the edge of another forest near the back of the Libua lake. I was drawn to a fast pace as our lead guide Archie Gutierrez, a prisoner who has served 17 years in prison for forging official vehicular documents but is now one of the bird guides trained by Haribon since 2007, without noticing my fellow photographers behind who were already cursing heavens and me for such quick pacing. They said I should have been the tail scout in order to manage the trek like a walk in the park. Yet everything vanished as soon as we heard the far calls of the hornbills. And then we saw them, two pairs eating at a fruiting tree about 100 meters afar, and then kissing each other.

Hornbills mate for life. During nesting, the female is sealed into the nesting cavity (inside a tree trunk) by the male, who feeds her through a bill-sized hole. If the male is hunted and killed, the female and chicks die as a consequence since no food is delivered to them.

The MINDORO TARICTIC HORNBILL is the only kind where both sexes are similarly creamy-white and black. The only difference is that the male has pinkish face, while the female’s is bluish. I noticed that the female has yellow eyering, while the male has red, but this maybe just a color aberration by the camera.

The MINDORO TARICTIC HORNBILL is threatened (classified as “endangered” by IUCN) due to declining population as a result of habitat loss compounded by hunting. As we lost our forest, we too lost our birds and other wildlife.

After getting some documentary photographs and as soon as the birds flew away after several kissing scenes, we came nearer the fruiting tree and made natural hides from banana leaves. We waited for two hours hoping that the birds would come back to feed before dark, but they did not, perhaps because of the prisoners nearby who were busy in their farms, or perhaps our scent can be smelled a kilometer away. We could have taken our perfect shots had the hornbills come back, but they were elusive. Instead, more than two dozens Philippine endemic Blue-naped Parrots noisily arrived at a nearby tree. And that ended our birding in Sablayan. We got out wish… But we could have wished for full frame shots! Next time, we will be specific in our prayers.

Thanks to Kaakbay Officer Homer Silva for all the preparations, and to his brother-in-law Ricardo Carding Casungcad, the former OIC and current head of the Therapeutic Department, and current OIC of Siburan Subprison Jess Orieta, for allowing us and providing us guides. Thanks also to our guides and porters Rizalito Laguna and Rolly Llorca, who were fortunate to be trained/exposed to birding by Haribon and other environmental NGOs and local and foreign birders, while within the confines of the prison colony and while serving their life sentences. We are finally thankful to Fr. Fernando Suarez who invited us to visit Ilin Island where we came from before proceeding to Sablayan. It was his invitation that made possible our birding in Occidental Mindoro.