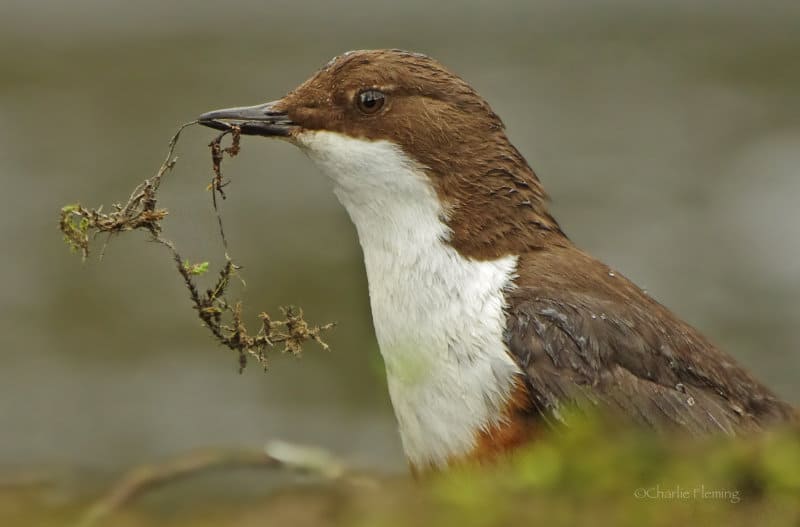 I have just started my annual observations of Dippers that breed on a river close to the Dartmoor National Park in Devon . Last year I spent almost every day for at least 8 weeks photographing and recording their breeding attempt. I say attempt because it ended in tragedy when the river flooded and their bank-side nest was washed out, drowning the chicks. In pictures, here is a short diary of the breeding attempt. In this first picture the pair start to construct their nest from a moss and other waterside vegetation, both birds sharing the construction duties.

Both the male and female bring nesting material to the nest. This is typical of the moss used which is woven to form a large domed nest.

The nest starts as a platform in a depression above the water. The birds work constantly to form it in to a balled construction, this took about 17 days to complete on this occasion.

Because of the lighting conditions and chosen site, it was really hard to freeze the action when birds were coming to and from the nest.

The nest “bowl” is always lined with dried beach lives that are, at this time of the year a golden colour. When you see a Dipper carrying leaves like this you know that nest building is almost complete. Here (below) the nest is almost at that stage.

This is the completed nest. It was half way down a steep bank of the river and close to some tree roots . This gave some support when it was first being constructed. Even when I knew it was there it was hard to point out because it blended in so well to the natural vegetation. Some Dipper nests that I have found contain another compartment which is used by the male for roosting and is also thought to be a decoy entrance to fool predators but this one had just one opening as you can see.

I didn’t manage to observe mating but this was about as close as I got. I think that actual copulation occurred in the nest.

Quite a lot of food presentation took place. The male would bring food to the female in the nest even before eggs were laid. This, I assume , was to strengthen and reinforce the pair bond. Here the male delivers a variety of prey.

Dippers feed by entering the water and completely submerging themselves. They use their wings under water to propel themselves and walk with their heads down and pointing in to the fast flowing stream using the force of the water to hold them down. Then when they have finished they turn and “fly” under water to a rock where they will hop out.

These little passerine birds feed on small insects and larvae but from time to time, small fish. I was thrilled to actually see one of the pair catch a small Salmon par. He beat it constantly before swallowing, here (below) you can see this behaviour..

When it was swallowed, the bird remained still on the rock for at least 10 minutes until it settled in it’s stomach. This is a comparatively massive prey item for such a small bird.

Once eggs were laid the female did all the incubating with the male standing guard nearby. She would leave the nest for 5 or 6 minutes around twice an hour to feed and drink, the male would always accompany her when she flew upstream to do this. In the photo above and below she is returning to the nest.

Incubation took 17 days and commenced before the 4th and final egg of the clutch had been laid. This is different to re-cycled information that I have previously read that states that incubation wouldn’t start until the clutch was complete. This meant that one chick hatched a day later than the other three.

Here the male stands guard in front of his nest. Dippers are adapted to being in and around cold water. They have a different sort of haemoglobin in the blood which carries more oxygen to allow them to keep warm in conditions that other small birds would not be tolerant of. In addition they have more feathers than other birds of a similar size as well as a thick under-down.

They even have tufts of feather that cover the nostrils at the top of the beak as you can see in the photo above.

Once the chicks had hatched, the male did most of the bringing of food but after a few days the female would also leave the nest to find food.

Here the chicks are around 4 days old. I took the opportunity to check the nest while both parents were away finding food. It is never legal in the UK to handle chicks in the nest unless you are a licensed bird ringer (or bander for US readers), but there is a scheme administered by the British Trust for Ornithology (BTO) where nesting activity is recorded and it is permissible of course to check the nesting progress to properly complete the nesting card. A day after this shot was taken disaster struck in the form of a flash flood and the nest was completely submerged. The chicks perished and breeding was unsuccessful at this site in 2012.

In this photograph the male forlornly attempts to gain access to the nest, the entrance has already been submerged and the chicks have drowned but the male desperately tries to get in, confused by the rise in water levels.

In 2011 even though I could not find the nest in this year I know that breeding was successful because I subsequently discovered a lovely young bird in the territory and it is interesting to note the difference in plumage. Adult above juvenile below. To visit my own blog and follow this years Dipper observations as well as Kingfisher click on the link here.

Charles Fleming is a wildlife photographer and nature blogger based in South West England. His blog "Wildlife in a Suburban Garden" has more than 1400 entries and a link to his galleries where you can view more than 4000 images from home and abroad, including a gallery of birds of the world featuring photographs of more than 500 species. "My aim is to try and put my readers and viewers intimately close to the subject and to share the thrill of watching and photographing birds and wildlife at close quarters".

Charles Fleming is a wildlife photographer and nature blogger based in South West England. His blog "Wildlife in a Suburban Garden" has more than 1400 entries and a link to galleries where you can view more than 4000 images from the UK and the rest of the world featuring photographs of more than 500 species. "My aim is to try and put my readers and viewers intimately close to the subject and to share the thrill of watching and photographing birds and wildlife at close quarters".