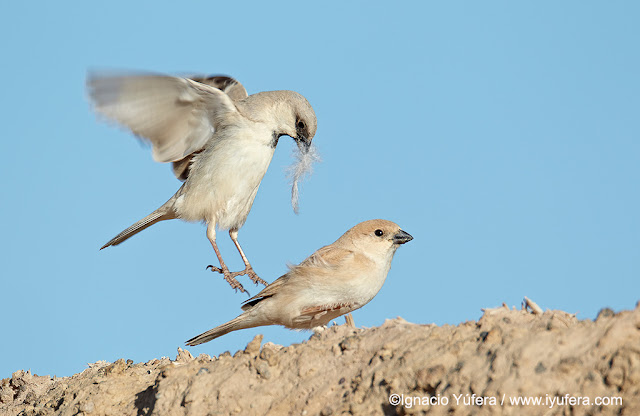 The Desert Sparrow (Passer simplex) is a small passerine found in North Africa and Central Asia. So far two subspecies have been described for the Sahara desert (P.s. simplex and P. s. saharae); the third subspecies, localized in areas of Irán, Turkmenistán and Uzbekistán, also known as Zarduny’s Sparrow (P. S. Zarudnyi), may be split into full species status in the near future, on the grounds that it shows no sexual dimorphism between male and female.

Desert sparrows are one of the most characteristic birds of the Sahara desert. Superbly adapted to arid conditions, they prefer to breed in oases and wadis (dry river beds) with some vegetation, and often live close to humans. Berber builders intentionally leave nesting holes in their adobe houses and barns to for the birds, which they call “bar-rode”; in their traditions, the song of a Desert Sparrow in their home is a sign of good news. Tuareg people call the birds “Moula-moula” and are also quite fond of them.

In very remote areas they are the only birds found in or around villages or nomadic camps, but as more settlements are built for tourism, and distances between them are reduced, a host of new species soon follow: Domestic doves (Columba livia), Collared doves (Streotopelia decaocto) and especially House sparrows (Passer domesticus). All these species compete directly with the Desert Sparrow for food; House sparrows are bigger and more prolific, and eventually occupy most of the available nesting space.

Passer simplex in Merzouga. The area between Merzouga and Tafilalt in Morocco is the northernmost point in the Desert Sparrow’s African distribution. It is also one of the few sites where this bird can be seen in the Western Palearctic, which makes it especially attractive for international birders. Desert Sparrow populations in this area have suffered a marked decline in recent years, due to increasing human activity around the tourism industry in Erg Chebbi, the most important sand dune habitat in Morocco.

The current Desert Sparrow population in this area is no more than 100 individuals, according to a census made in 2010 by ICO (Catalan Institute of Ornithology). 25 pairs nest in an oasis in the middle of the dunes (accessible by camel only). They seem to be relatively safe, but saturated; there is no room for more. Birding tour companies have located four more breeding pairs outside the area occupied by the hotels around the dunes; they nest in palm trees, holes in acacia or tamarisk trees, and one inside an active Brown-necked Raven (Corvus ruficollis) nest.

In view of the declining numbers of the species, the Emberiza Fund has designed a project with the objective of helping Desert sparrows keep and possibly increase their numbers in the Merzouga area, by providing them with especially designed nest boxes.

Nest boxes.The nest boxes have been custom-built drawing from the experience gathered by ICO researchers in previous years, adding details extracted from designs used successfully with North American House Finch and House Sparrow. Desert Sparrow is slightly smaller than its domestic invasive cousin, so the entrance hole has been narrowed by 2 mm, in an attempt to prevent house sparrows from using it; experience will tell if this works. The boxes have been built by a local carpenter, following Emberiza’s blueprint. This eliminates transportation and import costs, and also makes a modest contribution to the local economy.

Desert sparrows usually breed between March and August, but this can vary greatly from year to year, depending on climatology. This means that the nest boxes must be installed all year, and their location is determined by several factors:

Closeness to fine sand areas with abundant growth of Alfa grass, an important natural food for the birds.

Nest boxes must be installed on the side of the tree that receives the most shade during the day.

After several scouting trips by members of Emberiza to find the best locations, in December 2012 fifteen nest boxes have been installed in the Merzouga area. A local agent has been hired to monitor and care for the boxes; further assessment of nesting success and will be done by birding tours to the area, organized by Boletas(www.boletas.org) and Audouin Birding Tours (www.audouinbirding.net).