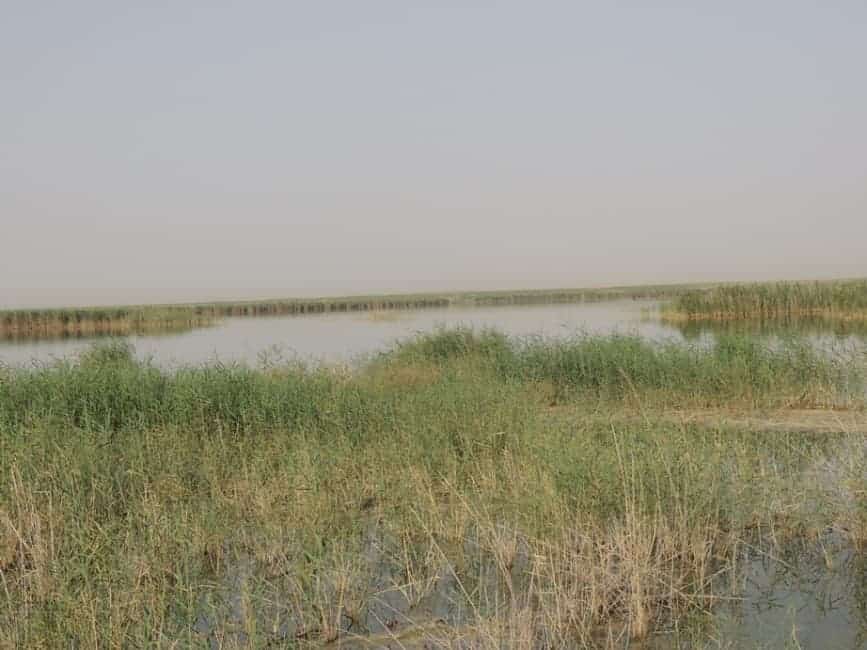 The al Hassa lagoons east of Hofuf in the eastern province of Saudi Arabia are arguably part of the biggest oasis in the world.

The argument is over whether you can count the fact that much of the water is channelled run-off from the area’s huge collection of palm plantations as well the city’s treated waste water. Personally I would count this water since it came from the same aquifer as the lake basin in the first place and is thus essentially recycled. Either way, in terms of water mass, the lagoons collectively cover several square kilometres and they are in the middle of a desert.Surely then if it looks like an oasis, it is an oasis.

I visited this area a few days ago having read about “Hofuf marshes” in the record of one of the main historical bird watchers in Saudi Arabia.

Fortunately for me, one of my students at King Saud university lives in Hofuf and organised a (non-birding) guide for me. Apparently finding the place was not going to be easy as it’s off-road into the desert.

So last weekend, I took a journey on the only railway line in the Kingdom from Riyadh to Dammam and got off at Hofuf station. Bright and early the next morning my driver was waiting outside my hotel before taking me the many kilometres on an hour-long trip to Lake Asfar.

Lake Asfar is the largest of the lagoons but is often used as loose name for the whole area. Its name highlights another problem. There are about 10 different names for essentially the same place: Al Hassa lagoons, Hofuf marshes, Lake Asfar etc and to make matters worse there is apparently a small run-off area south west of Hofuf city which is also called Hofuf marshes.

My driver left me in the same place two days running. This was a good idea so I and he minimised the chance of me getting lost (I birded alone) though thankfully mobile phones work there and GPS co-ordinates were taken.

A further precaution we took was to take a big sack of ice with us. Plenty of water and other drinks were stored in the ice which was left under a bush for me to return to from time to time. I also put ice under my hat to cool me off as I walked around! The heat was fierce.

I actually came to pick up clamorous reed warbler as addition to my Saudi list. My initial thinking was everything else would be a bonus. The lagoons are nearest place to Riyadh where it is known to breed. I got this “tick “within 5 minutes of arrival. And what a noise the species collectively makes. It also exposes itself readily so a photographic record was easy.

Another obvious and immediate observation was the there was a high density of little bittern and squacco heron. No other heron family member was seen. I have thought about this and I have a theory. I wonder if the reason is the hunters in the area. The other members of the heron family are either bigger or flock more making them easier targets so little bittern have found a niche.

Other water birds included the ubiquitous moorhen, some little grebe and a solitary cormorant. Whiskered tern and little tern were diving from time to time feeding on the many fish. These are apparently mostly Tilapia zilli and Aphanius dispar. Both are nice tern-sized fish.

The resident Kentish plover was the most common shorebird. However I also spotted common sandpiper and Terek sandpiper which are almost certainly passage birds.

Indeed according to Important Bird Area (IBA) write-up, the lagoons are excellent for both wintering and passage birds.

Certainly most of the land birds I saw in the vegetated areas around the lake were on passage. All four shrikes seen: Turkestan shrike, Daurian shrike, lesser grey shrike and red-backed shrike would be on the move. The whinchat, incidentally my first in Saudi Arabia, whitethroat and lesser whitethroat are also on passage for sure.

Another first for me in Saudi Arabia was a cuckoo.

I had to leave the area at lunch time on the second day in order to catch my train back. I must admit I had wilted under the heat anyway.

I left with a sense that I hadn’t done the place justice even though my initial target of seeing clamorous reed warbler had been simply met. I hadn’t seen the black francolin which the IBA description says is present. I hadn’t seen any houbara bustard on passage mentioned in another of the patchy sources. And I had a feeling there ought to be other diversity too.

It was only when I got back home and did further research that I discovered that some of the smaller lakes were probably better for birding. In particular the second largest lake, name unknown at least by me, to the north east of lake Asfar looks very appealing if the photos on google earth are anything to go by. There are more trees and more land cover. My thinking is that the extra ground cover looks good habitat for black francolin for example.

That’s the agony and ecstasy of birding in under-birded areas. You should feel elated at finding out new things but you often feel depressed because you missed so much. There may be a template to follow but you haven’t found it. Just as likely there isn’t. You sometimes have to make your own mistakes and learn from them.